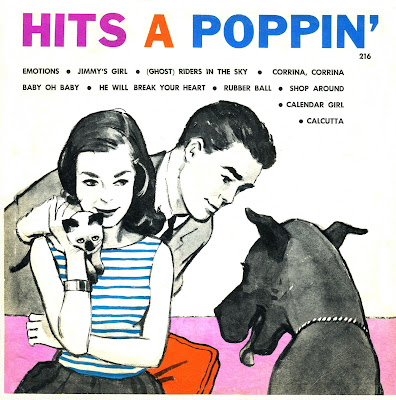 Don't ask me to explain SPC's numbering system--last time, we had ten 1961 tracks on SPC 116, and now we have ten 1960 tracks on SPC 216.  I suspect two different catalog series, but no way to be sure.  Just like the previous LP, this one has no actual label name (the LP's title seems to be serving as such), but the tracks are credited to "The Promenade Orchestra and Chorus," so I guess this can be regarded as a Promenade release.  The folks behind Promenade were, of course, the Synthetic Plastics Co. of Newark NJ, and this time we have a better pressing, which meant an easier rip.  Surface-wise, just some small stray ticks (the uppity term for "clicks") and a pop or two--post-VinylStudio, that is.  This showed up at the same Goodwill as the previous LP, so we can assume the same person owned it?  Not that it matters, but...

The line-drawn cover is campy fun, even if it's not what one would call an expert illustration.  Better than I could do, anyway.  The same art shows up on at least two of Promenade's Top 12 Hits EP sets, and this one (from my collection) features the tracks we heard last post, plus two more.  Except, they're offered in abridged form on the EPs.  Promenade EP versions were always edited down, simply so SPC could cram six selections per side.  We have to wonder if the guy in the picture is a little apprehensive about the big dog...  Notice the sloppily arranged lettering. 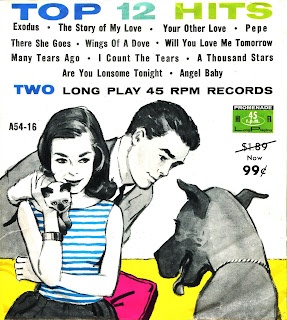 Today's LP had a corresponding EP set.  It featured different (and equally uninspiring) art, plus the two extra (but abridged) tracks.  Image swiped from eBay: 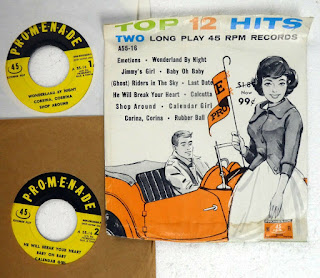 The eBay dealer wants $20, but I think I'll pass.  Maybe if it was part of an artist-signed set or something...

So, hits are "a poppin'" all over the place, and I just picked up the fifth one.  I had to place a song folio over the LP to keep the hits contained, and... like the previous SPC offering, this disc offers some surprisingly excellent fakes.  We have someone (let's call her "Anonna Miss") singing Brenda Lee's Emotions (with less of a little-girl feel to her voice), a competent outfit singing the Miracles' Shop Around, an expert "fake" orchestra performing the Lawrence Welk smash hit Calcutta (I've always loved this one), a good counterfeit helping of Jerry Butler's He Will Break Your Heart, and a Corrina, Corrina fake that (imo) improves on the Ray Peterson version.  Not to upset any Peterson fans, but the original track (which I accessed through YouTube) doesn't have me very impressed, vocal-wise.

That was Side A.  Side B commences with a fake of Johnny Tillotson's Jimmy's Girl, which is pleasant enough, followed by a very good cover of The Shells' Baby Oh Baby (it's a bit more in tune than the original), followed by an imitation of The Ramrods' (Ghost) Riders in the Sky (earlier, in 1949, a huge hit for Vaughn Monroe, of course), hopping ahead to Bobby Vee's Rubber Ball, and closing with the every-song-he-wrote-sounded-the-same Neil Sedaka's Calendar Girl.  I hate to pick on Neil Sedaka, especially since he was such a huge influence on Carole King, but he just gets annoying to me really fast--even in a faked version thereof.  Hyper-talented guy, but...

In other news, the vague possibility just occurred to me that "Poppin'" (as in Hits a Poppin') might refer to the pop charts.  It might be a pun on "pop."  Or not.  To the fake hits... 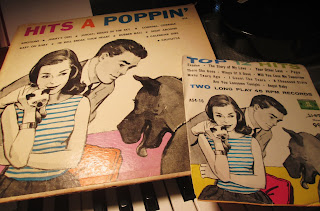 Posted by Lee Hartsfeld at 4:09 PM

I've always liked Jerry Butler's "He Will Break Your Heart."

I think you need one of the Promenade pennants that the young woman is waving on the second EP cover. So much better than a "Synthetic Plastics" pennant. (Strange name, that - are there any "organic plastics"?)

Good catch--I hadn't noticed that the pennant said "Promenade"! And I've wondered exactly the same thing about synthetic plastics. As in, what other type are there?

Hi Lee, Another very nice collection. Remember when, as in then, you could actually understand what a singer sang. Pronunciation and enunciation were everything. AND... real instruments. None of this programed synthetic (my joke, haha) stuff. When real people, bands of any size, orchestras too were in the studio. Plus words, lots of words in songs. A swear nowadays they must pay by the word. Bryan

Ah such a Pleasure to hear this one Lee... Crystal Clear Words of Wisdom...With some Blue Persuasion. My favorite one is like a Red Rubber Ball. Thanks Again for you great Albums, there like no others. But your Musical Special Albums will always Rock...There Toe Tappers. Take Care and have Fun in the Sunshine.

Thanks! And we'll be getting some sunshine back in a day or so. We just enjoyed two mild days (after a week or two of Florida-style weather), but tomorrow the temps go up and the rain comes out. Oh, well. I think they call this summer!

Thanks for the kind words, and good times to you, too!