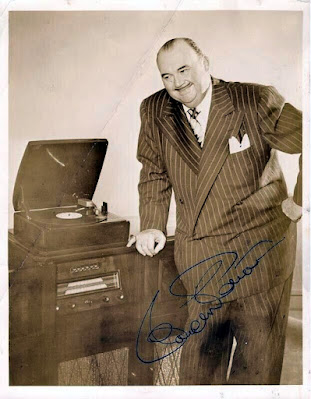 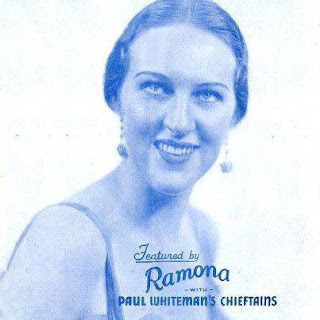 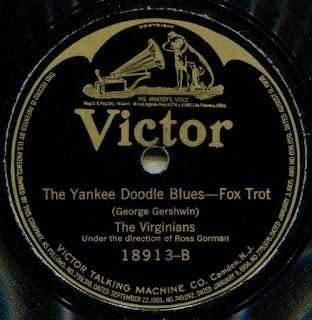 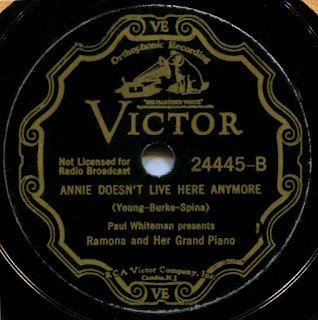 We'll be hearing (eight times, no less!) from Paul Whiteman's more jazz oriented "satellite" band, the Virginians (led by Ross Gorman), and we have two terrific helpings of the amazing singer/pianist Ramona, aka Ramona Davies, aka Estrild Raymona Myers.  "Estrild Raymona Myers" sort of lacks the direct simple and direct appeal of "Ramona" or "Romana Davies," so I can see why she shortened it.  Born in Lockland, Ohio (in the southwestern corner of that state), Estrild/Raymona/Ramona was playing piano professionally at the age of 12.  I can easily believe it.  We'll hear Ramona accompanying herself on the 1933 "Paul Whiteman presents" Victor recording of Annie Doesn't Live Here Anymore, and tickling the ivories with Roy Bargy on the flip, Irving Berlin's Not for All the Tea in China.  Back to the Virginians--imagine all the jazzy moments in Whiteman's 1920-1924 happening, not in select spots, but throughout the entire recordings, and you've got the Virginians.  As far as I know, Ferde Grofe did the arranging for this group, and a good part of Grofe's genius as an arranger lay in his ability to put the Dixieland sound on paper; and so we have tightly structured but nevertheless "hot" jazz which sounds like the regular orchestra having a blast.

Other highlights include Grofe's riotous arrangement of Countess Maritza (1926), the flip side of PW's #1 hit, Birth of the Blues, which precedes it in our playlist.  It goes without saying, given its nonstop quotations from Rhapsody in Blue, that Birth was also scored by Ferde.  The quotations are so ingenious that what could have been a rather turgid treatment instead delights the listener.  (Well, I think so, anyway.)  And we have 1945 recreations of the classic early-1928 Bill Challis arrangement of San and the number one (in 1921) Grofe arrangement of Wang Wang Blues, recorded for the Capitol Records History of Jazz series.  The former fares way better, and in fact outdoes the original (imo), while Wang Wang Blues lacks the brilliance of the 1920 recording, more or less taking an "Isn't this early stuff hokey?" approach to the project.  I guess the plan was to demonstrate how far the Whiteman sound had evolved in eight years (don't have the Capitol liner notes handy, but I'm guessing that was the intention).  Anyway, these were the first two recordings I heard by Whiteman, so they hold a special place in my musical memory.  And... we have two fabulous concert orchestra performances from 1934, most likely scored by Roy Bargy: Peter De Rose's Deep Purple (in its pre-song form as a "symphonic jazz" gem) and the equally cool Park Avenue Fantasy, from which came Stairway to the Stars (with lyrics by Mitchell Parish). 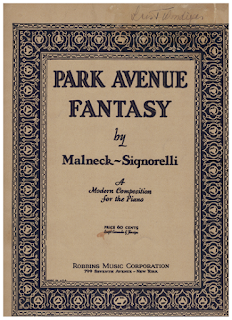 A huge hit, and a showcase for cornetist Henry Busse, 1922's Hot Lips begins with a comical borrowing from Rachmaninoff, proceeding to a superb solo spot by Henry.  Because jazz critics have tended to be 1) unkind to Whiteman's orchestra, and 2) often dismissive of the pop and jazz sounds of the late 1910s and early 1920s, Busse has gotten a rather raw deal, critically.  That is, he's typically characterized as the anti-Bix Beiderbecke, a player with a corny and sweet sound who failed to fit in during the Challis/Satterfield/Malneck Whiteman period of the late 1920s.  That he was a more than capable jazz blower (to use the jazz slang) seems like a fact lost to time, but we have the audio proof before us.  It's a shame that nearly all "Did Paul Whiteman play real jazz or a faint facsimile of?" queries focus on the Beiderbecke period, since much of the jazziest happenings on PW 78s occurred prior to 1927.

Singer Jack Fulton shows up at least four times, most memorably on the slightly weird but delightful Cuban Love Song (1931), from the movie of the same title, and on the lovely Villa (1931), which sounds very much like a Grofe chart, though the Williams College site doesn't list it.  Apologies to Bing Crosby fans, as Bing doesn't show up today, and mainly because the selections mostly occur outside of the Bing/Whiteman window.  Ironically, Bing's firing from the band (due to his drinking and tendency to not show up on schedule) proved to be quite a solo career boost.  Or a prelude to same. 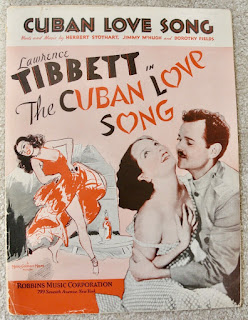 Interesting note: Charles Wolcott, arranger of Straight from the Shoulder (1934), is credited with "bringing rock 'n' roll to the screen" in this 1987 AP obit.  He had insisted on using Bill Haley's Rock Around the Clock in the 1955 Blackboard Jungle, which he also scored.  How about that?

And we have vocalist Johnny Hauser expertly handling the lyrics to 1934's There's Nothing Else to Do in Ma-La-Ka-Mo-Ka-Lu (Hope I got that right).  Expertly is the only way such lyrics can be handled, really.  Last time, I described such numbers and arrangements as "pop Hawaii," and so I guess I'll stand by that.  No idea on who supplied the charts.

To the Whiteman, Ramona, Roy, and Virginians (but no Bing).  All tracks ripped from 78s in my overflowing collection.

All by Paul Whiteman and His Orchestra, unless otherwise noted

Rose of the Rio Grande--Same.

I Wish I Could Shimmy Like My Sister Kate--The Virginians, Dir. by Ross Gorman, 1922.

Not for All the Tea in China--Roy Bargy and Ramona (Paul Whiteman Presents), 1933. 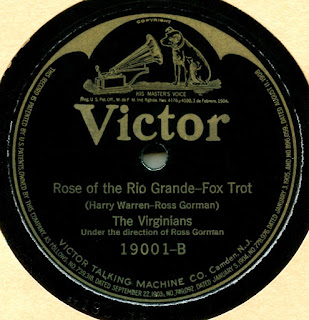 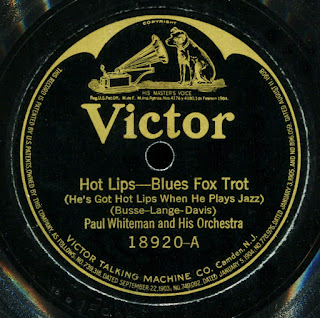 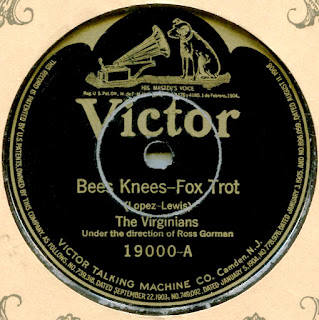 Posted by Lee Hartsfeld at 2:59 PM

Good collection, Lee! Thanks for continuing this deep dive into Paul Whiteman and his crew.

A deep dive, indeed! I've been maintaining an alphabetical order list of tracks, which is helping now that I'm at the 250+ point. Organizing the playlists is half the work!

Well, that's an incredible collection! But I have some bad news for you...

Though I'm sure yours will sound a lot better than some of those. :)

Buttering up the blogger--that's a swift move! 😃 But, seriously, I recall listening to some files from that collection and finding them... not so good. I'll have to check those out again. The restorations from the George Blood studio are wonderful, needless to say, but I've heard some really lousy restorations from other, less professional sources. Oh, and Whiteman is all over YouTube, too. I'm not covering new ground, but hopefully I'm covering it well...

And, dear Lord, there are dreadful Whiteman rips at YT. I'm thinking of a poster whose rips vary to a major degree between entries--some of his rips are celebrations of turntable rumble (and/or the rumble inherent in acoustic(al) 78s). As you probably know, sound-recording rumble is typically caused by a less than perfectly flat playing surface, and most 78s haven't aged perfectly. But a decent sound-editing program can minimize rumble, and summing the channels does wonders by itself.

Good to see that you have got a handful of Bing sides with Whiteman scattered across the first six posts. While I prefer the later WWII-and post war Bing, with his more relaxing baritone, I will have to give the other songs a listen.

Having found all these files gives you a little bit of a break from creating new rips, at least for a week! I am planning to dive into Part 7 soon and provide you with chart details for a couple of songs that did make Billboard during that time. Part 7 looks like it has got some fascinating songs on it that I want to check out. Also, I did not know that the man who wrote the "Grand Canyon Suite" did a lot of work for Whiteman's band.

Again, thanks for your work in bringing the neglected music of this Pop music pioneer to the masses. Have a great weekend.

You, too! And Grofe was Whiteman's chief arranger, starting in 1920. Previously, Grofe had written arrangements for the Art Hickman Orchestra (I have a 1930s piece on Grofe which confirms this). Grofe left Whiteman in (I think) 1932, and it was because Whiteman proposed a contract that would give Whiteman too much of a share in Grofe's concert works. Reportedly, Whiteman was furious over Grofe's departure and did his best to hinder Ferde's career. So claimed Grofe.

I love the Youtube videos where someone sets out to answer the question of what 78's sounded like when they were new. Then they proceed to play it with the wrong needle and the wrong EQ. :(

(Correct text) Glad you mentioned EQ, because I've given in to fashion and am using a 600 Hz (or so) bass turnover freq for acoustical 78s (starting with the inverse RIAA and a flat curve), with a -12 Db rolloff. I'm more or less following a series of recommended acoustical curves which start with an 800 dB turnover! That's sort of overdoing it, though. Then I tweak everything with my parametric EQ after exporting the file into MAGIX. Anyway, CD labels like Archeophone, plus a lot of YouTubers, go for a heavy "bass" for horn recordings, and that's only possible with a turnover of 500-650. I don't know how different my fresh Whiteman acoustical rips will sound, but the difference shouldn't be that epic. I have at least 20 pre-1925 PWs to do.

Er, I meant "corrected text." Naturally, I'd put up a corrected text containing a typo. Which is not to be confused with Typo O.