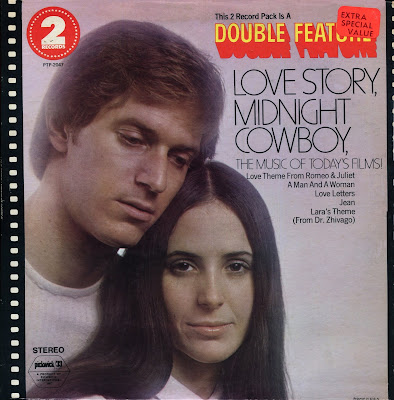 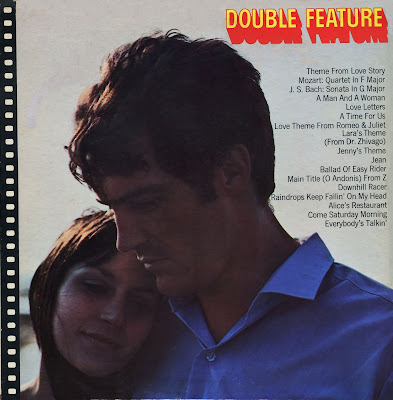 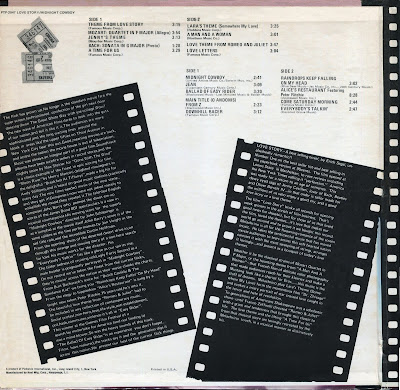 This is an epic fake.  And I just Googled "epic fake" and found out it's an actual phrase.  Darn.  I hate it when people steal a phrase from me prior to my coming up with it.  It's not fair.  Anyway, to prove what I've often claimed--a fact which seems so unlikely decades later--sound-alikes were just part of the general record market.  And accepted as such.  Here's a June 10, 1972, Billboard blurb I captured from on line.  I circled the part which pertains to this LP.  Any closer, and resolution would have been lost:

Just part of the 1972 market, though that promotional campaign (the black and white floor unit merchandiser) was something else.  Did anyone actually go through with it?  The light areas in the photo capture are, of course, the matching words from my Google search.  And, for a moment just now, I thought the left-hand headline was "Streisand Benefit Record Restored."  Thanks, eyes.

I love the "Extra Special Value" sticker on this.  It's like an admission that, yes, this is junk.  Honorable mention goes to "This 2 Record Pack Is a DOUBLE FEATURE."  Really?  Not a triple one?  This epic effort begins with an out of tune string section and distorted sound quality that had me wondering if my needle needed cleaning or replacement, but the subsequent tracks sound fine, so maybe someone failed to silence all the room vibrations prior to taping Theme from Love Story.  Painfully off key and distorted--unbeatable combination.  Actually, it sounds like one of the mics rattling.  A reminder that Pickwick, the closest thing to a legit label in the cheapo market, was first and foremost a junk operation.  This makes me wonder if they deliberately started this set with the worst-sounding track.  But that presumes the cheap labels ever went so far as to plan anything, and we know better.

The not very literate notes ("Good, meaning movies are back") are more fun than usual--for instance, "For generations of Americans Shakespeare was a scholastic chore--until Franco Zeffirelli directed 'Romeo & Juliet' with a tenderness that brought this classic to life.  'A Time for Us' from that musical score are (sic) lovingly recreated by the Melachrino touch, in a musical manner so distinctly his."  Wait--George Melachrino?  It's his orchestra on this?  Then why isn't his name anyplace in the credits??  This is astounding.  What on earth??

Only three P.D. tracks, which is impressive for a budget effort.  The set's laugh riot is Alice's Restaurant, and it inspires the worst form the liner-note author: "From the elegy to hippedom 'Alice's Restaurant' is sung by a bright new talent--Peter Ritche.  15 years old, he's into it."  A comma after "hippedom" turns that first sentence into English.  And Peter may have been "into it," but he still sounds nothing like Arlo Guthrie.  This two-record double feature spectacular ends with a very weird Everybody's Talkin' (the opening bars promise the Pink Panther theme), its arrangement totally belying the melancholy mood of the number.  It's not so much an example of bad taste as an example of non-taste.  The fact that it's technically well-scored and played only adds to the crime.

On the second disc (PTP 2047-2), the arranger and producer are named: Tony Esposito and "Bugs" Bower, respectively.  Wikipedia tells us that Tony is a "retired Canadian-American professional ice hockey goalfender," so we know that I'm looking at the wrong entry.  Okay, here he is.  Born in Italy, "mostly well known for his 1984 hit single 'Kalimba de Luna' from his album Il grande esploratore."  I just listened to seven seconds of the number at YouTube.  Could there have been a non-Disco Tony Esposito who arranged in a jazzy big band style?

And "mostly well known" is kind of ambiguous.  Does that mean, to the extent that he is well known?  Chiefly known for?  Kind of known for?

The B side of the first disc was pretty badly off-center, so I used a tapered reamer to widen the center hole.  That did the trick, enabling me to center the vinyl.  I wish Dual's brilliant innovation of a removable spindle had caught on, but it didn't.  And so I have to resort to this. 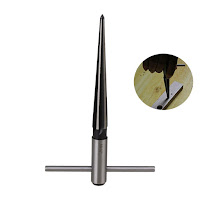 Never tried it on a 78--shellac is too brittle.

Label scans are included with the download.  Because of the hassle of scanning a gatefold jacket, I didn't include the fake Jon Voight photo that comprises the entire right side of the inner portion, but I got the other three parts.  Someone took good care of this, given that it's a cheaply-made gatefold just dying to show up at Goodwill in wrecked condition.  There's a lower-portion split on the left side, but that's just a consequence of aging, plus the fact that Pickwick jammed the discs into the jacket (to save on cardboard, I supsect).  In pretty amazing shape for what it is.  I thank the previous owner.  To the sounds....

One of my least-favorite record innovations from the 70s was the practice of jamming two-record sets into one flimsy jacket. The others include lousy pressings on cheap vinyl, disco and actually most pop and rock music from the decade. I was not a happy music consumer in the 70s, except for classical.

This one does have two pockets, but they're not quite large enough. So they may as well have jammed the discs into one! I know the type you mean, and, as you probably know, those often had a piece of cardboard to separate the two discs--a really classy touch. Columbia Record Club two-fers did that.

I was no 70s fan, either. That's when Credence Clearwater Revival, The Steve Miller Band, and Led Zeppelin were starting to dominate. It's the music I'm somehow required to like at my age (62), and I hate most of it. People seem to have forgotten about the "progressive rock" pap of the time, which is nice--it deserves its lack of status. God, did I get sick of having to endure Yes and ELP. Then came Disco. Ahhhh, memories.

Yeah, I focused on my piano lessons and tuned out AM in the 70s. The best I could, anyway.

Btw, I'm stunned you're not a Disco devotee. Not.

I too am not a prog rock devotee. I somehow actually saw Yes live in the early 70s. My enduring memory was that Jon Anderson was painfully flat throughout the set.

Thanks for this, I love these sort of albums.

Perhaps the Melachrino in question was Jeb Melachrino, George's older brother who ran away from home years ago......

My pleasure! I was just thrilled to find it in such terrific condition, given the odds against that....

Yet another unknown delight from the bins.

There's an additional FAKE that you neglected to mention:
The front cover, as well as the LPs themselves all say STEREO, while the recordings are all presented in glorious lo-fi monaural sound.

Oh, nooo. VinylStudio must have mixed it to mono against my wishes. The program is "buggy" and often checks options that I did not check. Probably happened as I was exporting the tracks to MAGIX. They're sitting in stereo at VS, so I re-exported them--and they arrived in stereo this time. I just need to re-edit everything and then repost. In stereo.

Thanks for alerting me. If VS didn't do such a great job, I'd have gotten rid of it. This time I forgot to make sure all was well before exporting....