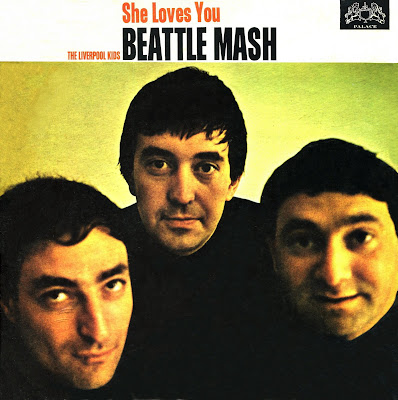 Is this the worst of the budget label Beatles knock-offs?  Sure seems to be, but since I haven't heard them all, I can't really say for certain.  Meet the three Liverpool Kids, all of whom appear to be pushing 40.  (Maybe it's the lighting.)  Beattle Mash, says the cover--with two t's.  Maybe the Palace and Masterseal labels (this also came out on Masterseal) were simply being clever.  But, wait--on the label, the title becomes Beatle Mash, and the Liverpool Kids become... the Schoolboys.  Was the staff asleep when it put this one out? 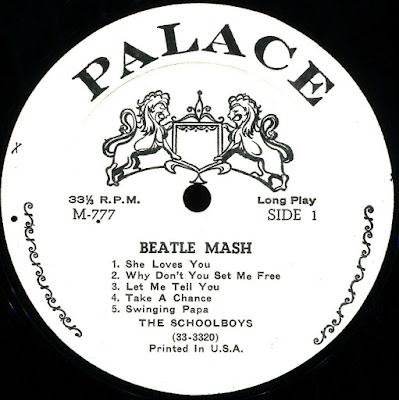 It gets weirder.  I quote this sentence fragment from the liner notes: "THE LIVERPOOL MOPTOPS--these four young men, who with a group of excellent musicians, have adopted the style of BEATLING, the hottest craze in show business on either side of the Atlantic."  The notes promise that the Liverpool Moptops "will give you the great pleasure you are looking for."  So, if you've been looking for great pleasure, you've found it right here.

So, our group is the four-guy trio called THE LIVERPOOL MOPTOPS, and not the Schoolboys, and not the Liverpool Kids.  And their specialty is "BEATLING."  So, why are most of the tracks Twist numbers?  I'll answer that soon.

But let's start with the two numbers which make this trash classic a classic--they are 1) a pretty decent fake version of She Loves You, and 2) a blatant plagiarism of I Want to Hold Your Hand, called Why Don't You Set Me Free (the chorus lyrics being, "Why don't you let me go?"). Which could be retitled Why Did They Not Get Sued?  Absolutely priceless.  My guess is that the Beatles and Brian Epstein weren't going to halt their wildly successful concert and record gigs and go after a track on a label so indifferent to product quality that it couldn't get either its LP title or fake group name straight.  As if they'd know or care about this Franken-collection.  Anyway, these first two tracks are gems, at least to fake-hit fanatics like me.

And a little checking revealed that all or most of the rest are retitled Twist numbers from three LPs issued on this label (and Masterseal) and credited to Bobby Dunn with Les Cooper and His Twisters.  The old reuse-and-retitle strategy.  So, Japanese Beatles is also The Latin Twist, from an earlier Palace/Masterseal LP, a Twist collection very imaginatively titled, Twist.  Pea Jacket Hop is The Chinese Twist (huh??).  Lookout for Charlie is Twisting on the Hill, while I'm Lost Without You is Shimmy, Baby, and Thrill Me Baby is What a Thrill.  All from Twist.  Dunn and Cooper probably never imagined that, shortly down the road, they'd become a four-man "BEATLING" trio called THE LIVERPOOL MOPTOPS.  Or the Schoolboys.  Or the Liverpool Kids.

There may be a worse Beatles knock-off cheapie out there, but none as absurd.  Then again, you can't underestimate these outfits too much....

Posted by Lee Hartsfeld at 9:38 PM

I love this kind of nonsense - the packaging, not so much the music. Was Palace the worst of the worst cheapo labels? If not, who was?

Palace would be pretty close. About on a par with the Synthetic Plastics Co. labels and the earlier Eli Oberstein labels (Halo, Royale, et al.). Pickwick had some epic losers that resorted to this kind of stuff, too--Design, especially. Tough choice! Palace and Masterseal may have had the shoddiest vinyl of them all--even worse than SPC.

I dunno - that Royale plastic from the early 50s would have been hard to beat. Also hard to play.

Yes, the Royale 10" LPs are especially thin. Oddly enough, I don't recall coming across a cracked one--just lucky, I guess. The Varisty label vinyl, by contrast, was too thick to crack, but the surfaces are always noisy. Only the lowest quality vinyl for that group!

I love the way these 'amazing recreation' bands will give you one, maybe two Beatle covers (usually She Loves You or I Want To Hold Your Hand) while the rest are rippoffs like Why Don'y You Let Me Free. Royale? Palace? Suddenly Design and Crown are looking pretty high class! As for Epstien or EMI coming after these people, I imagine it was understood there wasn't enough money there to make it worth their while.

Good point! And, yes, Palace and Royale make the other cheapies look legit.

Wow, I'm impressed! This does look to be the current champion of worst of the worst. And I've never seen it, so there's that, too. Congrats! :)

Thanks! This is a gem, so to speak. Palace released another "Schoolboys" LP--this time, with a line-drawn cover clearly meant to depict John, Paul, George, and Ringo (plus a fifth member!). Only Ringo looks like Ringo. It was co-released on Mastersal, and the credits are a mess, just like the credits on mine. From the Discogs notes: "Credited on front cover as The Schoolboys. Credited on back cover as The Liverpool Moptops. Credited on label as The Moptops."

Two of the "Beatle Mania" tracks are posted on YouTube, and neither appears on my LP.

The musicians are surprisingly competent,blocked this album.

I agree that the musicianship is very good. I wonder how Palace got its hands on such good tracks? I assume "blocked" is a typo? (-: Nice to hear from you!

Yes, blocked was a typo. I don't recall seeing it when I clicked on "publish". I love your writing style and records, it is right up my alley.

A while ago I started listening to these albums, this album did not seem bad to me, rather it is a fill that can be heard. Thanks for sharing. Another one I'd like to hear is the entire Beatle Mania, in YT there's only one part of the album.

I posted the Beatlemania LP here. I think it's the one you're referring to:

No problems, it was a pleasure to find this place. Thank you so much for your effort.