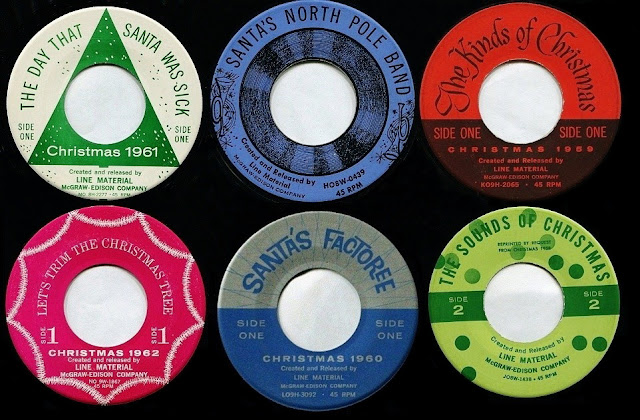 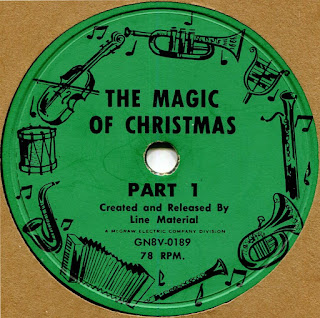 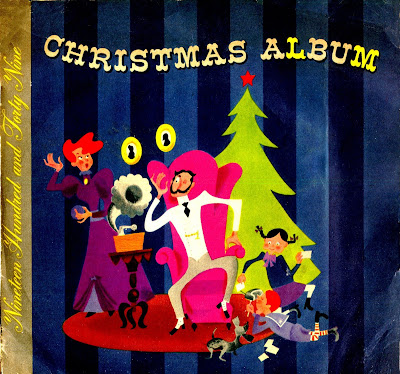 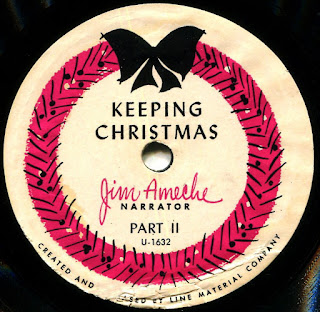 I just completed re-re-ripping the classic Line Material Christmas sides of 1957-1961. (My first rips date back to 2005 or 2006, and my second rips were made last year.)  These singles were employee giveaways which featured musical direction by, believe it or not, London-born John McCarthy (1919-2009), best known for his Ambrosian Singers Christmas sides.  I wonder if the superbly professional singers on these 1957-62 45s are those same folks--I would assume so.  McCarthy went to London in 1961 to work with the London Symphony Orchestra, and presumably his services were no longer available to, or within the budget of, LM.  And, as I did last year, I've added two "bonus" LM tracks--1949's Keeping Christmas, and the 1956 The Magic of Christmas, both released on 7-inch vinyl 78s.  The former is a typical storyteller-with-music-and-sound-effects side, and, while charming, it's nothing like the LM holiday sides to come.  The latter comes closer, though it's not nearly as elaborate and lively as the McCarthy efforts.
I believe Ernie gifted the 1956 side to me.  And, yes, he did--I just read his 2007 post on the subject.  That's the year he mailed me the disc.
1962's Let's Trim the Christmas Tree was most likely recorded a year in advance, since, as noted, McCarthy was out of the U.S. by then.  And that, as far as I know, was the end of the classic LM sides, though there was a blah 1964 side, and I neglected to rip it, so... sorry!  Ernie and I have both featured it in the past, but it's hardly a must-hear item.  For Line Material Christmas giveaway completists only.  Anyway, I feel bad for all the children of Line Material employees who, after six years of enjoying John McCarthy's efforts, suddenly (come 1963) had to go without such goodies.  Ouch.
Oh, and I had a couple of Canadian editions that someone sent me in mp3 form some time back, and the files are probably currently on a CD-R buried someplace in my CD-R stacks.  Or saved to disc from past hard drive folders.  Your guess is as bad as mine.  I recall that these were identical to the U.S. editions, save for a different jingle at the close.
My LM rips of last year were made with my 1.0 mil mono stylus, and I really wasn't too thrilled with the sound.  So I made these re-re-rips with a standard 2.7 mil "LP" needle, and it seems like the better match.  You'll notice (in the mp3 tags) that these were all RCA Victor custom pressings--I've included the RCA matrices, all of which begin with a letter designating the year (G for 1956, H for 1957, etc.).
It's possible I flipped the years on the 1958 and 1959 sides in my 2019 post--I'll have to check that out and correct things, if needed.
DOWNLOAD: Line Material Christmas Classics (1957-1962; plus 1949 and 1956)

Hi Lee! Thanks for another great set of Line Material stuff. I think I sent you the older one of these many years ago. I didn't have a 78 needle at the time, and no experience ripping 78s, so I knew you'd be able to do some justice to it. And, of course, you've done a wonderful job celebrating these releases.


Oh, I think CaptOT (Rob) was the one with the Canadian releases of these records.

A new rip, eh? I will check it out. These are classics!

Forgot to mention, I've got a Jim Ameche Christmas single coming up sometime during the season, though I don't think it has anything to do with this single. And he shows up on a New Year's track as well that I'm particularly stoked about sharing. :)

Thanks, guys. And is that Jim Ameche record a children's side--"The Littlest Christmas Tree," or some similar title?

Yes, that's the Jim Ameche. Of course, now that I look, I think you shared it in 2006 and a few times since. The world must be running out of Christmas music to find...

Frightening to think that we could be nearing the end of "new" old material!

Stay tuned at FaLaLaLaLa for the visuals to accompany these tunes... Should start posting this week.

I really look forward to seeing those! And let me know if you need the 1949 booklet, which I can scan for you, if you wish.

LM must have had a lot dough, given its amazing booklets and the very fact it could even afford the likes of John McCarthy for its classic sides.

These things sound so good! Even the lesser ones are still interesting to my ears. Good job on collecting them!

Thanks! My new rips of the 1957-62 definitely sound better than my 2005/6 rips, probably because my turntable's better, and because I sprang for a quality after-market conical stylus for my Stanton 500 cart--made in Japan, no less. Stanton no longer manufacturers styli, of course, which is too bad...

When I was ripping these this year and listening more closely, I got the distinct impression that the singer on Let's Trim The Christmas Tree is Tom Glazer. Which makes me wonder if the female voice is his partner from the Singing Science records Dottie Evans. I don't think so but I need to listen more closely.

I didn't know Dottie Evans had recorded with Tom Glazer--cool. I know her from her Waldorf recordings.

Lee, I have consistently enjoyed the old Line Material releases, and am SO VERY APPRECIATIVE of your efforts. Thank you very much!

My pleasure! Thanks for the nice words. I'd love to find out how LM got the services of John McCarthy!