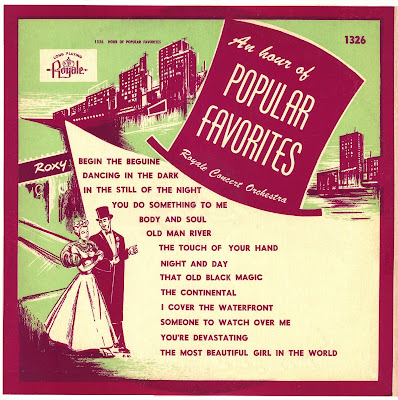 I love the 1930s-style art here, and this particular on-the-town image shows up on at least one other Royale LP.  So, An Hour of Popular Favorites.  Would you settle for 41 minutes?  Because that's what you get.  Of course, you could always put a few tracks on replay, which would get you closer to an hour.  So, I ripped this a week ago, and listening to it just now, the rumble was offending my ears.  So I used MAGIX's rumble filter, and things sound better.  But I mention this on account of the fact that typically, when I make a major change to the sound of a track, or a set thereof, I give it day to make sure I didn't make the change in error.  I'm really meticulous about this stuff.  That's why my Williams College Mandolin Club file (last post) took around ten tries.  During Christmas, when I'm rushing to deadline, I often put up restorations that have me wincing after the fact.  There was a group of 78s that didn't come out very well, but nothing I can do about that now.  Sometimes, you just gotta close your eyes and press the "Publish" tab.  This is not a job for the squeamish.

So, like all Record Corp. of America (not to be confused with RCA) releases--or like many of them, anyway--this has a copyright year of 1952, which I don't trust.  Besides, I'm pretty sure most, or all, of these tracks are reissues--for example, the four Percy Faith tracks--Begin the Beguine, Dancing in the Dark, That Old Black Magic, and The Touch of Your Hand--appeared on Majestic and/or Varsity 78s in 1947 (or at least were recorded in that year).  And the Ted Straeter side--The Most Beautiful Girl in the World--dates to about 1948.

I have no idea where the rest of the tracks come from, but feel free to investigate--and let me know what you discover.  And, unless the Varsity label had a wonky cataloging scheme (which is very possible), it appears that some of the Percy Faith material showed up on that label after Faith hit it big on Columbia.  The old artist-becomes-popular-and-the-previous-label-or-labels-rush-out-earlier-recordings routine.  Like RCA Camden, with Roger Miller.  I imagine Starday Records did the same thing with its Miller material.

Back to today's tracks, the original masters probably sounded good, but Royale did its usual crummy remastering job here, so what we get, audio-wise, is pretty good but nothing to phone home about.  Yet, we (or at least I) have heard far worse fidelity on LPs from this cheapest-of-the-cheap label group--I guess I would have to rate this audio (post-rumble filter) as surprisingly adequate.  It's possible I have a never-before-played copy, though it's hard to tell with junk labels, since "mint" is relative.  And so there were pressing defects and other things I had to contend with, but for late-1940s easy listening, these are all excellent and decently recorded examples.  I was honestly expecting D- fidelity along the lines of An Hour of Star Dust, a Royale classic which boasted terrific performances--and hold-the-mike-up-to-the-radio-speaker fidelity.  An audio embarrassment, though a truly fun LP.  Today's Royale collection is easily a C+, or even a B, sound-wise, and the content is top-notch mood music--in particular, the superb Percy Faith numbers.  I'm sure that Royale, if it was still in business, would send its apologies for the missing 19 minutes (from the "hour" of favorites). 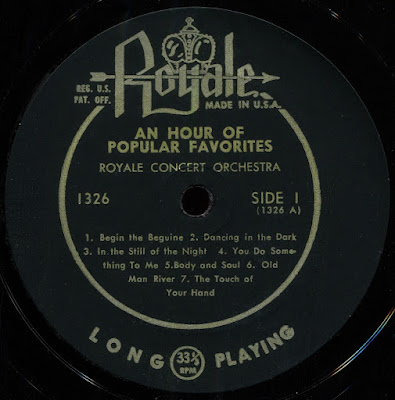 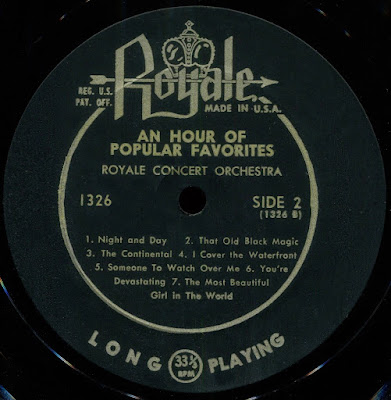 How did you figure out the Faith and Straeter attributions?

The Faith tracks sounded familiar, so I did comparison listening, since I have Faith on Royale. It was a hunch, mainly. And, since Straeter had some material on Royale, I figured it might be him on "Most Beautiful Girl." Luckily, someone had put up that track on YouTube, so I was able to verify my guess. I was thinking maybe Robert Russell Bennett on the remaining titles, as I falsely remembered having him on Allegro-Royale. But my cheapo Bennett LP is actually on Gramophone. I don't know what cheapie group Gramophone belonged to.

Hi Lee, Thanks for another great instrumental LP. I have been in a kick lately adding additional mp3 versions of 101 Strings LPs to my collection. So I always enjoy having more choices. Besides, you get tired of singers all the time. Especially those who can not sing, or who are just plain off-key. Bryan

PS. Especially nowadays, with the limited, very limited, lyrics for dummies in the songs, instrumentals win me over. Honestly, do writers get paid by the word, and do listeners have such short attention spans? Okay, maybe they have ADHD too. Pity, it not fun to have.

Gramophone was an Oberstein label, it was the basis of the Concertone, and the Halo/Ultraphonic labels catalog. Nice share, thank you.

Thanks, and I totally agree about modern songs. They have a Chinese water-torture effect on me. It's as if someone comes up with a title, writes it down, then adds instructions to "repeat monotonously until fade-out."

Thanks! I was pretty sure it was Oberstein, but Discogs has no info on the label. I probably should have consulted Wikipedia's entry on Eli.

Your meticulousness (a word?) must have extended to that cover, which looks gorgeously clean. Thanks, Lee.

I always imagined the FCC or ICC or FDA or somebody went around buying records advertised as "An Hour Of...", then checked them with a stopwatch and if they came up short there was trouble. But I'm guessing that never happened. :(