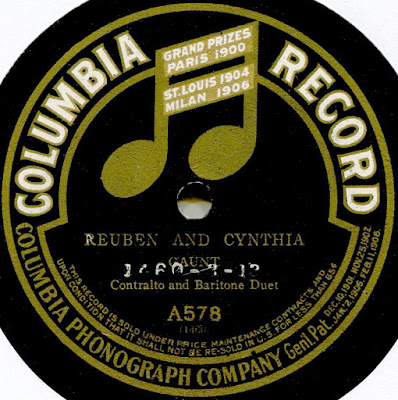 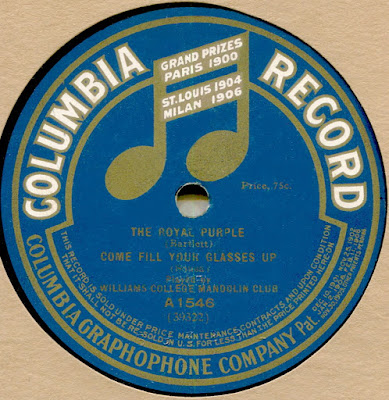 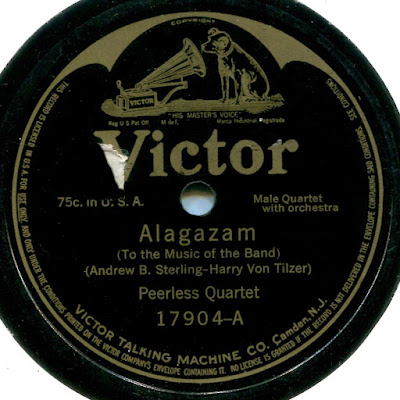 DOWNLOAD: Reuben and Cynthia; Come Fill Your Glasses Up; Alagazam

I haven't posted in a while, though I have three entries nearly ready.  In the meantime, here are three 78s, two of which required four or five (or six) tries to get right.  Or someplace close to right.  The third--a typically-racist-for-its-time 1915 side called Alagazam (To the Music of the Band)--only required a couple tries, as I quickly realized that the lack of audio body in the quartet was a fault of the recording--maybe something to do with positioning the recording bell/horn to best capture the bass drum sound.  This could have precluded placing the quartet any closer.  And, oddly enough, my memory of this side is that Billy Murray can be heard on it, and prominently.  But there's no trace of him.  Maybe it's simply the kind of thing I can imagine him being a part of. 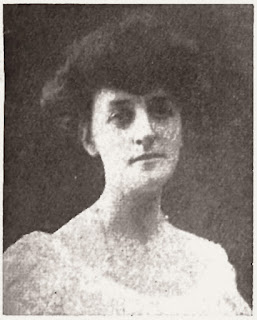 Reuben and Cynthia, from the 1892 hit musical A Trip to Chinatown (Charles H. Hoyt-Percy Gaunt), is first on our playlist, and it has all the characteristics of a comic country duet (with banter), albeit without country-sounding voices, save for Frank C. Stanley's New England-style old-guy accent (and there was a New England branch of country/hillbilly).  Or, should I say, it contains the seeds of comic country banter?  No, I'll stick with my first choice.
I'm assuming that  "Reuben" means "rube," and while Stanley is somewhat in character, Corinne Morgan sounds more like a society lady than a simple country girl, or whatever she's supposed to be in this number (lyrics here). Corinne was born in central Ohio, where I live, though her accent is like nothing I've heard in these parts.  However, years of vocal training, the need to overenunciate for the recording horn, plus the fact that the acoustical process wasn't kind to the female range--these could all explain her seemingly odd accent.  That, plus the passage of  118 years.  That can do it.  Now, I was thinking this song might have a folk source, but I've been unable to establish anything like that.  It's probably one of those composed numbers that just happens to sound "traditional."  The same musical gave us After the Ball and The Bowery.  The coolest thing about this 1903 recording (which I ripped from my 1908 reissue) is not only the amazing piano work, but the approximately four seconds of Corinne singing in the background as the record starts, just before the announcer comes in--late.  It seems like both of them missed their cues.  I love caught-on-wax errors of that type.  In the starting grooves, it seems to be a different number Corrine is singing--possibly in preparation for her next session.
The 1914 Williams Mandolin Club 78 was a freebie included with an eBay order.  I was astonished by what I heard, because it is very much like the African-American string bands I'd heard on acoustical recordings from the same period, except, in this case, the Mandolin Club was evidently recorded as is.  It wasn't pared down to four or five players, with the percussion close to the horn (that's why you have to really listen for the drumming on this side).  And, since I have no idea how a large string club/orchestra should sound with the acoustical process, I had to make my best guesses--about nine of them--before deciding my file was as good as I was going to get it.  I really, really want to generalize like crazy from this single example of a college string band/club, given that mandolin and banjo clubs are African-American in origin and that what we likely have here are middle class white kids imitating black models (which meant the kids had heard the real deals).  The second part of this record, the one that picks up in tempo and charges ahead in near-ragtime fashion, is an 1896 text named "Come Fill Your Glasses Up" (gee, I wonder what that's about?) and matched to a strain from Sousa's Corcoran Cadets march of 1890.  But, as much as I want to generalize like crazy from a single example, I know the foolishness of trying.  At any rate, high school and college mandolin and banjo clubs, which were often augmented with drums, reeds, and brass (there seems to have been an anything-goes ethic), were a big thing from the 1880s to the early 1920s.  They didn't up and vanish, but they seemed to become less common after that initial boom.  I have seen a few college banjo club LPs, I believe, but I can't imagine a record store section devoted to same.  "Massed" string bands--clubs--existed all over the country--New England, the Midwest, Colorado, etc., and there were men's and women's groups.  Here's the not-tiny 1917 Oxford University (of Ohio) mandolin club.  Good grief.  And you'll notice a banjo and some other non-mandolin instruments... 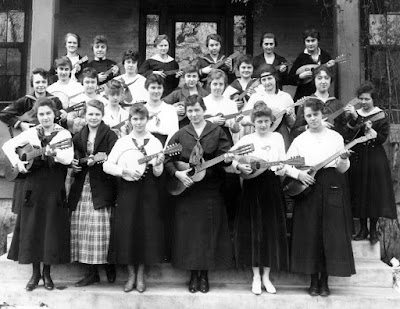 Our last 78--a 1915 Victor--features the superb Peerless Quartet--my favorite of all, from their time as the Columbia Quartette and forward--with Alagazam (To the Music of the Band), and I've heard too many jazz, rag, and rag-related sides from this period to be remotely surprised that the "darky patrol" tradition hadn't yet disappeared.  So much great music from the 1890s-1920s, and there's no way to pry it loose from the front-and-center racism--the words and images--that came with it.  I've been reading up on Alagazam in an attempt to figure out its meaning, and all I can tell you is that there was a 1902 ragtime piece by that title, with "Alagazam" allegedly a refrain marched to by a "colored regiment" in the South--so the composer of the piece claimed to have witnessed.  The word must be related to "Alakazam," which is a magical phrase of the "Abracadabra" type.  Maybe the idea is syncopated rhythms have a magical effect or quality.  Or maybe it's simply a nonsense word.
A fuller playlist next time...
Lee

Posted by Lee Hartsfeld at 2:00 PM

"High school and college mandolin and banjo clubs...were a big thing from the 1880s to the early 1920s" - I had no idea. Always learning something from ypur blog!

That's good! What I find most amazing about the clubs--besides the fact that middle class white kids were copying an African-American tradition--is their ubiquity. For such a widespread tradition to become historically invisible--it's weird. eBay is a great place to research these things--I got the Oxford University (of Ohio) photo from that site. I own one mandolin club concert program (from eBay)--it's from 1901, and it was part of a divinity school. Even if massed string orchestras/clubs recorded worth a darn with the horn process, they would still have had little commercial potential--so we'd likely be left with little aural documentation. But who knows? To my ears, any combination of string instruments produces a "busy" sound, much like what we hear in early jazz and "hillbilly." I'm guessing that this "busy" sound is created by a collision of overtones. I suspect a link between large string "orchestras" and brass bands. The Dixieland style/genre did away with violins but used percussion, piano, and banjo in combination with cornet, clarinet, and trombone. Dixieland can be viewed as a variation on a string band, and in fact the high school and college clubs were freely adding brass and reeds to their "clubs" from the start, it looks like. But, minus a mess of sound recordings to back up my rogue theory, I'm out of luck.

Er, my theory that brass and string bands have a common link.

Most enlightening. The rise of brass playing may have had something to do with the recording horn, perhaps? Also the brass tradition in New Orleans being influential. But I may be mixing genres and time periods.

The recording horn definitely had something to do with it, plus the fact that bandleaders like Sousa and Arthur Pryor were the "Pops" (concert music) kings of their day. And I believe that the brass tradition in New Orleans stemmed from young black musicians receiving Civil War leftovers--cornets, trombones, etc. The thing I regret is that the string bands, which I think played a much larger role in jazz and country than we realize, are vastly underrepresented on shellac. By the electrical era, the "clubs" were still around, but they seem to have moved in the direction of the current popular music--the jazzy dance music of Whiteman, Goldkette, and Waring. I have a 1925 Williams College Mandolin Club 78, and I was initially very eager to hear it, but it turned out to be barely string band-related--it sounded like college kids playing from period jazz charts. The question is why the group wasn't renamed, but anyway, I get the impression the Jazz Age killed the clubs. Which would make a great movie line--"It was the Jazz Age that killed the clubs." ("I thought it was beauty killed the beast." "Yeah, that, too.") There was so much happening in popular music during (roughly) 1890-1920, but of all the concurrent trends, only a certain percentage made it to cylinder or disc. There's the continuing mystery of why Dixieland took so long to show up.

"Light concert music," I should have typed. A proud tradition, and one ruined by the rock age, really. Symphony orchestras playing the Rolling Stones, or the AABA songbook interspersed with the best of Neil Diamond. Modern "Pops" concerts may as well consist of placing a radio on the stage, tuning in an oldies station, and putting the mike up to the speaker.

Could it be that string bands were too hard to record in the early days? Seems as if early recording techniques might have found horns easier to render.