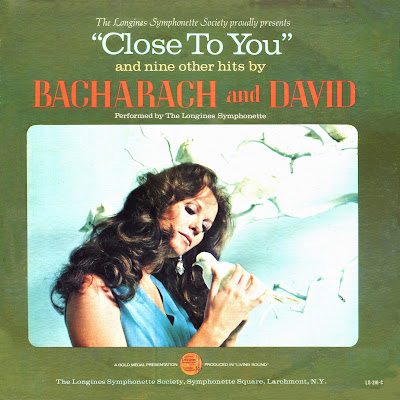 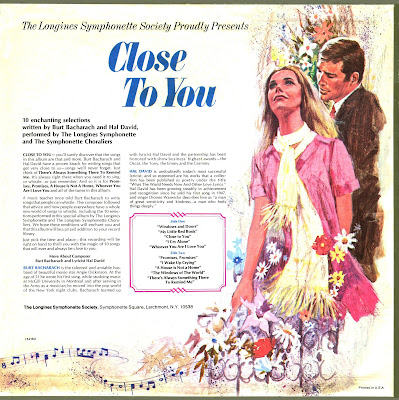 If you ask me (what, you didn't?), The Longines Symphonette Society's 1972 Close to You is one of the best mail-order easy listening LPs ever released.  And, as any vinyl thrifter knows, there were countless mail-order easy listening box(ed) sets sold by Longines, Reader's Digest/RCA, Columbia House, and whoever else provided soothing-sound LPs for people who preferred their vinyl by mail, and not from stores.  Yet, despite this fact, "mail-order easy listening" gets exactly zero matches on Google.  Well, it'll get at least one now.  (6/24/21 UPDATE: I just now got two matches, neither of them from this blog.  Go figure.)

In my opinion, Longines produced the best mail-order easy listening to be found, even if that's not an official pop music category, and... wow.  Seems that the Evolution label (remember Lighthouse?) was a LS subsidiary--see this Both Sides Now piece.  News to me.  LS also ran the Capitol Record Club for a while.  Cool.  The Longines discography at Discogs extends for ten pages, so the place was clearly very busy, vinyl-wise.  And I reckon it don't get much respect for its audio product, which is unfortunate, given how good some of it was.  I, for one, would love to encounter the five-record Bacharach box sometime--it must be sitting in some thrift store, someplace.

This excellent LP of ten Burt-Hal selections has a special place in my thrifting history: It helped push me into my Burt phase, which started about the mid 1990s and which continues to this very minute.  I believe this album provided my first taste of My Little Book as actually written (not as garage-band-ized by the group Love), and it was probably the first time I'd heard Windows and Doors.  I should note that I (no pun intended) love Love's My Little Red Book, though I might like the number even better in its jazzy as-intended form.  I'm pretty sure I've read that Burt didn't care for Love's version, though I'm sure he profited nicely from it.  Come to think of it, the first time I heard the rock version of My Little Red... was on a Standells LP.  I saw Burt and Hal's names in the song credit, and I went, "What...?"

An amazing thing about Close to You is how well (to me, anyway) the song holds up after fifteen zillion (give or take a million) versions--it's just a very nice melody.  The Windows of the World, Burt and Hal's touching anti-Vietnam song (I'd argue that What the World Needs Now Is Love tackled the same subject, only more subtly, in 1965) is one of my favorite Bacharachs, though I've read that it's not a fan favorite.  Their loss, I guess.  Best-track-wise, I'm torn between Little Red Book and the fabulous rendition of Promises, Promises.  I wish the arranger (or arrangers) had been credited--it's sad when someone produces something on this level and goes without an attribution.  But perhaps mail-order customers didn't care who put the music together, so long as it showed up on time on the porch.

(Here's an interesting piece by Angela Morley, a British composer and arranger who worked with LS in the 1960s and who regards the RCA mail-order sets as better: Angela Morley.  Also, see this write-up, which I missed when I first checked out LS on Discogs.  Deceptive marketing practices--for shame.)

I'll always love this LP, not only for its outstanding musical quality, but for the major role it played in kicking off my "rediscovery" of Burt.  Now, despite what my memory tells me, I'm sure my Burt phase didn't kick off overnight--it was, in all probability, a slow process (I remember finding some British Invasion Hal-Burt and thinking, "I need to check these guys out further), but this LP gave me a big push in that regard.  But this LP was the clincher.  Kudos to Longines for producing a gem which, by all logic, should have been a toss-away effort.  By the way, this copy is yet another thrift gift from Diane--my original thrifted copy seems to have vanished from my collection--probably during my big downsizing campaign, just before I started blogging.  (An essay in bad timing.)  Why I'd have downsized it, I can't say.  But it's great to have it back.

Windows and Doors
My Little Red Book
(They Long to Be) Close to You
I Cry Alone
Whoever You Are I Love You
Promises, Promsies
I Wake up Crying
A House Is Not a Home
The Windows of the World
(There's Always) Something There to Remind Me

Thanks, Lee. I see plenty of Longines records in the stacks, but to be honest, I breeze right past them. Even the Christmas titles. I guess I'm just prejudiced against them for some weird reason. I buy plenty of horrible stuff, but I don't take the chance on their records. :(

I love Burt, but have never heard this record, so many thanks!

"The Windows of the World" is a great, great song! Can't imagine someone not liking it.

Thanks Lee, a solid "easy-listening" album - well produced and arraigned - I like it (but then, I'm in the minority these days for this type of music) Greatly appreciate the share as I really only had xmas stuff from this producer - nice cover as well, wonder if she is holding a stuffed one or a liven'?

I think the thing with the Reader's Digest and LS issues is the challenge of dealing with them, since many are boxed sets, and because of the very generic nature of their catalogs. I know that, when I see a row of boxed sets, my first impulse is "Why bother?" but at some point in my thrifting, I started checking out the boxed sets. Not sure what compelled me to give them a chance.

I agree, but the song is often mentioned as a non-favorite--that is, people will refer to it as one of the less popular Burt-Hal songs. Or even as a misstep on their part. Maybe because it's a message song? By the way, I know you have some hardcopy (i.e., book) info on light music. You wouldn't have any data on who arranged this one, would you? Not too long ago, you sent me a page scan which revealed that LS used the same arrangers (Ken Thorne, et al) as RCA/Reader's Digest, with the recordings done in the UK. And... Discogs has separate listings for LS and for the "society" (the marketing arm), and all of its data is reserved for the latter. Annoying.

Glad you enjoyed! I've loved this one for years. And I was wondering the same thing about the cover photo--I'm thinking it's a prop. It is a nice pose, though, and I love the "period" art on the reverse--totally 1972. So far, I can't find a thing about where this was recorded or anything about the arrangements, but going by LS's 1960s practices, these were likely waxed in the UK, with arrangers like Ken Thorne. Thanks for checking in.

Hi Lee, Thanks for this share. Sorry for this late reply too. The singers are really of high quality. In the same class as Conniff or Faith. But I read somewhere that these session singers, probably with a change of personnel, recorded for these different labels, etc. Not sure if that was true or not.
Bryan