Sunday gospel returns! The Musical Biolans of the Bible Institute of Los Angeles (1959?) 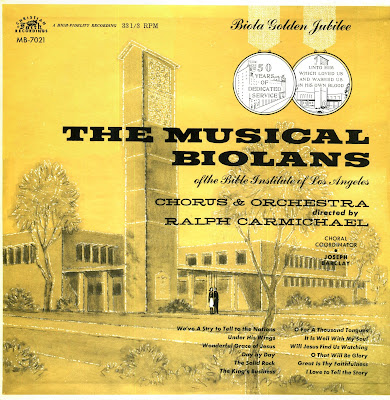 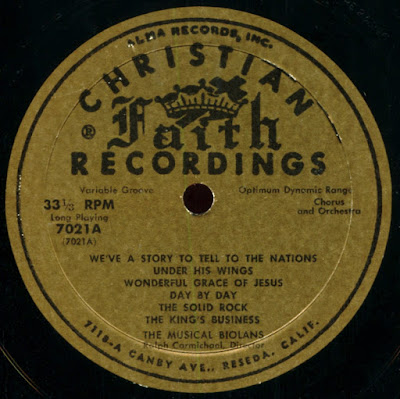 Sunday gospel is back, with a playlist of classic gospel songs--any choral LP which includes O That Will Be Glory is a must-have for this collector, and so I had to have this one.  The performances--by the Bible Institute of Los Angeles' Musical Biolans--are first-rate, and I only wish the arrangements were less languid.  Everything is sung with feeling, but some faster tempos (tempi?) and a little more gusto would have made this a perfect LP.  But, hey, I'll settle for near-perfect.

Though neither Both Sides Now nor Discogs have a release year for this, I'm guessing 1959, because the liner notes refer to "the new BIOLA Campus site in La Mirada, California," which was new in 1959.  And this LP certainly has a 1959 sound to it, so I'm going with 1959, as in "circa 1959."  Always good to qualify things, to be on the safe side.

For some time, I've had a VG/VG- copy of this, but this better copy turned up three days ago at Goodwill, and my first thought was "Sunday morning gospel."  I think this is the first time I've blog-featured the Biolans' version of Charles H. Gabriel's O That Will Be Glory--better known as The Glory Song--and versions of Glory, while common enough, are tougher to find than logic would dictate, given that it's such an important standard, and given its initial huge fame--it was the monster gospel hit of its time (1900).  I had read so much about it (and its popularity) that when I first found it in a songbook, it was nothing less than a letdown--my reaction was "That's all there is to it?"  Its extreme simplicity--its static harmonies (four full bars of I, to start out), and the highly conventional, even cliched, melody line, had me wondering what I was missing.  Well, it grew on me pretty fast, and it's now one of my favorite popular gospel numbers--I've used it as extra music (prelude,, offertory, and/or postlude) any number of times on the Sunday organ.  It was interesting to read that the famous gospel singer (and songbook compiler) Charles A. Alexander had pretty much the same initial reaction back in the day.  Gabriel was a minimalist genius, to put it awkwardly--"brilliant minimalist" might work better--who could say the most with the least.  And that's a rare talent.  He was capable of more complex things--he gave us the gorgeous, elegant tune for His Eye Is on the Sparrow, for instance--but his real genius resided in tunes which sound, at first, like exercises in the mundane but which morph into memorable ear worms before the conscious brain knows what's happening.  Gabriel could write unforgettable, not-a-note-wasted classics in his sleep, I think.

And it's perhaps a good time to talk about my "mission" when it comes to my Sunday gospel offerings--or, really, any of my offerings, I suppose.  Sixteen years back, when I first learned about blogs (then, without delay, put one together), gospel music was a dirty phrase in music blogging, and those blogs which did feature it tended to be blogs wholly devoted to the music.  (And, in the more mainstream music blogs, there was much ridiculing, or worse, of the music of our most popular faith.)  I like to showcase music that don't get no respect but should, and so I decided to do something daring--daring, especially because (at the time) I was a "cool music" blog of note, and nothing was less cool than gospel.  I decided to devote Sundays to my favorite sacred music, and simply to make the point that, hey, here's some really good stuff here that people ought to be aware of, regardless of your faith or lack thereof.  That was my goal, and I hope I've had some success along that line.  My by-now fairly broad acquaintance with both "gospel" and standard hymns only dates back thirty-one years--back to when I officially started my church-musician days (in a small country Presbyterian church), so I've been loving, and learning about, this stuff for approximately half my life.  My family was (alert the Understatement Police) not religious, so for half my life, my knowledge of sacred music was limited to Onward, Christian Soldiers, The Old Rugged Cross, carols, and Let It Be.  Plus a few others.  It was not a broad list.

Enjoy today's gospel goodies!  And notice how the catalog number's prefix (MB) abbreviates the group's name.  Notes Both Sides Now: "The Christian Faith numbering system of the 1950s was unusual, if not unique. It was not quite random, but it was certainly confusing. Most albums before 1965 used a two-letter, four-number format where the letters were the initials of the artists (RA=Rudy Atwood, HR=Haven of Rest Quartet, etc.)."  Cool!

We've a Story to Tell to the Nations

O For a Thousand Tongues

It Is Well With My Soul

Will Jesus Find Us Watching

O That Will Be Glory (Gabriel)

Great Is Thy Faithfulness

I Love to Tell the Story

In case I haven't mentioned it, I really appreciate your Sunday Gospel offerings - particularly the vintage and local-issue stuff like this. I'm a big fan of private and custom recorded records, and of pre-commercialized religious music (back when it still sounded and felt "sincere").

Thanks, Lee. I have learned a great deal about gospel music - and other types of music - from you and your blog.

Thanks for the nice words!

Hooray for the return of Sunday Morning Gospel!!

Thanks for the personal history of your religious music life. And thanks for bringing these sounds to the attention of folks (like me) who might not otherwise encounter them. Great to have one's horizons broadened!

Lee,
So glad to see the return of SMG! Said, is how I first found this blog (all be it text-only, since I believe the ZIP's links were long gone by then, I believe), back in late '07, or early '08. Can't say I'm personally a fan of every offering herein, but I do like a broad variety of conservative Gospel, from Starch to Mountain. I consider both terms, styles, but too much starch, makes one stiff LOL! Seriously, the LORD has used your blog, in my own life (and others I know), to bring to our attention, groups we've never heard of, or in as the case of The Looper Trio, groups we only had limited access to, so, thank you so much! It seems a very small phrase, but it's heart-felt, nonetheless! Oh and if/when I find them, I've still got a couple Valley Voices albums (originally from someone from the area) for you, that'll I'll do my best, to get to you. Looking forward to more/future SMgs, love and prayin' for ya!

Great to hear from you, and thanks for the kind words. Hope you find your Valley Voices LPs--I really enjoy their sound. Hope you're having a fine weekend!

Lee,
Got the CDs, 'round here somewhere, which I plan on copying the cards from, for you, once I find them, making you CDs (or a CD) of, or whatever it is, that I just typed LOL! I've got the CDs themselves, in the PC (in fact, just put a song from one of them, on a broadcast I was working on), so they won't be hard to find, but the other, there's the holdup. Speaking of the VVQ, also put a song from your album of them, on another broadcast, too! Oh and speaking of whatever I just typed, in my earlier comment, that should-a-bben, conservative Gospel music and that I'll do my best to get to ya. I believe I had some of the kiddos in here, while I attempted to leave that comment, so naturally, had a bit of QRM LOL! Oh and you're welcome, glad to, love and prayin' for ya!