Sunday morning gospel: The Cubitt Quartette--Sweeter As the Years Go By (1970?) 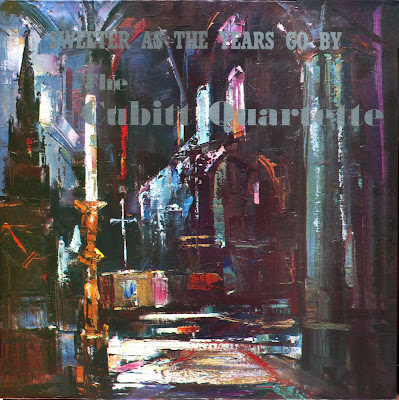 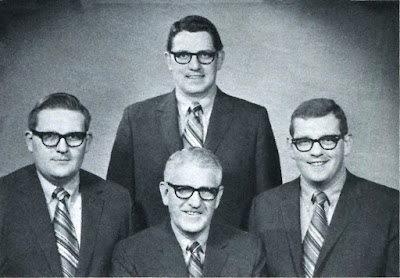 A very generic cover, but nice-looking, even if the font is nearly lost in the color scheme.  And I'll bet you can't tell that these men are from the same family--a father and three sons, to be precise.  They are Harold Cubitt (bottom middle) and sons Dale, Dwayne, and Elwin.  Not sure in what order the sons appear, though they are certainly precisely lined up.  Originally from Sandusky, Michigan, this group performed for UMC churches in the Sandusky/Bad Axe/Cass City area.  From the notes: "This record is the answer to many requests from people who have heard the quartette.  It is by no means a step toward professionalism but, rather, a way of serving their own churches."  The music on this LP "favors the older songs which all Methodists will surely remember and enjoy," and it's possible that, when this was made (My guess: 1970), the African-American spirituals in the playlist, plus He Lives, Christ Arose, and Great Is Thy Faithfulness weren't in the UMC hymnal.  (Checking my 1958 edition, I don't see them).  They are now, in case you were wondering--in the main hymnal, that is.  Presently, the UMC has at least two other hymnals, so I don't know what other numbers from this list may have become official, though I doubt O That Will Be Glory or Sweeter As the Years Go By (and, especially, Heartaches) have made it--they're just a little too... common?  I want to say vernacular, but that's not quite the right word.  Too non-standard, maybe.  Commercial, even?  But the main UMC hymnal is really moving in a songs-everyone-knows-and-likes direction, along with the standards, many of which (e.g., Blessed Assurance) were "Sunday School" songs when they were first penned.  So the cycle goes.

It's unusual to see "quartet" spelled "quartette" this late in the 20th century--even by the mid-1920s, if not earlier, the Victor and Columbia labels had dropped the last two letters.  But it was the Cubitt men's right to call themselves whatever they wanted--plus, to wear matching glasses for their self-sponsored album pics.  So, we know that this effort was not intended as "a step toward professionalism," but how amateur are they?  Well, no one would mistake them for the Blackwood Brothers or Statesmen Quartet, but they do a decent job with their Barbershop-style close harmony, and it's nice to hear these numbers rendered in simple, songbook-style arrangements, with nothing fancied up--no midpoint key changes or blasts of fortissimo.  By amateur standards, these guys are very good, and, though I wish Christ Arose had gone a little faster (as it is typically sung), this is a very pleasant listen.  And it's an interesting historical document--and not simply because it's a father-and-sons quartet (er, quartette).  Rather, because it's a local-circuit group dedicated, not to wowing a large audience, but to sharing the joy of "the older songs" with medium-sized congregations.  A thrift gift from Diane (thanks, Diane!), this is a cool and humble time capsule--a still-sealed time capsule, no less.  So, you're hearing my needle's first trip across the grooves.  This record waited more than half a century to enjoy its journey around the turntable--and to end up in cyberspace.  Enjoy!

DOWNLOAD: Cubitt Quartette: Sweeter As the Years Go By (1970?)

Great Is Thy Faithfulness (Chisholm-Runyan)
Heartaches (A.H. Ackley)
Beulah Land (C. Austin Miles)
Sweeter As the Years Go By (Mrs. C.H. Morris)
Standin' in the Need of Prayer (Spiritual)
Medley: I Want My Life to Tell/Nothing to Thee/Our Anchor's (sic) Hold
God Be With You (Rankin-Tomer)
Were You There (Spiritual)
Christ Arose (Robert Lowry)
He Lives (A.H. Ackley)
O That Will Be Glory (Charles H. Gabriel)
Lord I Want to Be a Christian (Spiritual)
Go Down Moses (Spiritual)
Let Us Break Bread Together (Spiritual)
Christ We Do Adore Thee (Theodore Dubois)

Posted by Lee Hartsfeld at 9:00 AM

Thanks, Lee and Diane! Nothing better than a still-sealed LP!

Still-sealed LPs seem to defy time. They're like a "Mint in Box" toy from the 1950s.

I used to have dozens of "custom-recorded" LPs (usually on the Mark Custom Records label) featuring this artwork and what I would presume to be variations on the theme by the same artist. I have often wished I could find a decent photo of the original, un-cropped paintings they used.

That would be cool. The art is well-done, especially compared to much of what showed up on many custom labels. I have some gospel jacket art that's on a high school yearbook level...

I also recall seeing this album art on other issues.

I was about to say that I've seen this artwork a few times before, it seems to pop up with some regularity. You sorta know what you're going to get when you see it. There are several Christmas covers that are the same way. The artist picked a cover out of a list and there just weren't that many choices. Some are nice, some are not. And you never quite knew how it was going to look until the box showed up. :)

I'm so glad this worked out to be a good one, Lee! Your regulars probably think I only send you great stuff. They don't know how many of my thrift LPs you reject to find each good one. Thank goodness USPS Media Mail is such a great deal.

Yes, what would life be without it? In my Navy days, when I was mailing batches LPs back home, the new postal clerk on board my ship got suspicious about Media Mail--like he was afraid he'd get in trouble for using it. I had to go to his supervisor. I didn't want to, since I'm not fond of "snitching" on people, but, as you know, Media Mail makes a lot of $$ difference. Funny thing is, I even showed him in the postal manual where Media Mail was explained. In fact, the previous postal clerk (can't remember the Navy slang for postal clerk) is the person who told me about Media Mail. Funny memory--the original postal clerk lost some mail off his truck when we were in a desert-style port in Australia. I was walking into town when he passed by. He asked me to stay with the mail--I had to act as a witness to the accidental dropping of the mail. Some kind of regulation. He was a cool guy, so I gladly waited for him to return as he zipped back to the ship. He had his own Navy mail truck, much like the modern type.