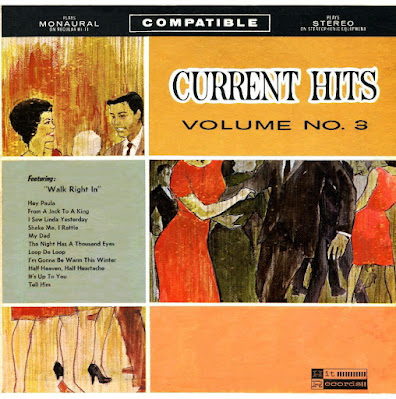 Today, we have the third volume of Hit Records' Current Hits series, and once again the release year is revealed in the liner notes--1963.  And I'm guessing early 1963, since some of these are 1962 hits.  One track, in fact, sounds closer to 1952 (and to Patti Page)--Shake Me I Rattle--though it was originally recorded in 1957 by the Lennon Sisters.  It was country artist Marion Worth who had the hit version in 1962, and she, of course, is the performer being copied here.  Not a bad song, and this is a very nice fake, but it's kind of anachronistic for 1962-63.  The duplicate interpretations in this edition run the gamut from decent to quite good, with Walk Right In and (especially) The Night Has a Thousand Eyes falling into the latter camp.  Eyes is probably my favorite Bobby Vee single, and "Joe Cash," whoever he was, does a very adroit Vee impersonation.  Just one of the best Hit Records tracks, ever.
And, is it just me, or does "Jackie Ott" sound uncannily like Willie Nelson on From a Jack to a King?  (I'm not suggesting it's him, but...)  Meanwhile, "George Killebrew" does a more or less okay Gene Pitney impression on Half Heaven--Half Heartbreak (dash omitted in this collection).  Nothing to phone home about, but adequate.

My Dad, the older-generation-friendly 1962 hit penned by Barry Mann and Cynthia Weil(!) lacks the gentle touch of the Paul Peterson original, forcing me to declare that "Woody Martin" is no Paul Peterson--the first and only time I'm ever likely to pass that judgement at this blog.  And Hey Paula is another mild number that fares significantly better in its non-fake version, though "Bonnie" (of "Bob and Bonnie") does a good job capturing the vocal mannerisms of "Paula" (Jill Jackson).  Things improve, song-wise, with Loop de Loop (orig. Johnny Thunder, charting in 1963); I'm Gonna Be Warm This Winter (orig. Connie Francis, 1962), and the entertaining, eccentric soul classic Tell Him (The Exciters, 1962; charted 1963).  The LP's condition could have been better, but things cleaned up nicely.  And it's good to have another early Hit Records collection.

Once again, we have the distorted bullseye design on the back cover, and the line of arrows pointing to its center.  The liner notes are fun--they start out by explaining why the songs on this LP are considered "hits," and you'll never guess.  Give up?  It's because people requested them from their local radio stations--and because "you, as a record buyer, may have purchased at least one of them as a single record."  Really?  Songs become hits because people request and purchase them?  Who would've guessed?

A sort of novel suggestion in the last paragraph: "It will be interesting to play this collection of hits a couple years from now and compare them with the current hits of that time."  I'm not sure what that means, exactly: Compare them to the sound of the period in question (1962/1963) or, specifically, compare the substitutes to the original?  Dunno.  At any rate, I think it's safe to say, 58 years hence, that these evoke their time and place more than adequately--in a fake sort of way.  Now that we've cleared that up...

Have a genuinely good time listening to these.

That cover seems to be a little cut up...

I just found your blog via a YouTube post! I had a real big interest in budget and knock off records (especially 60s & Beatles fakes). Looks like we're both the same age as well.

Just wanted to say I'm enjoying your blog - keep up the good work!

Yeah, they were clearly trying for an arty effect, though the results are kind of weird. An offbeat Hit Records/Modern Sound cover, but I like the color scheme.