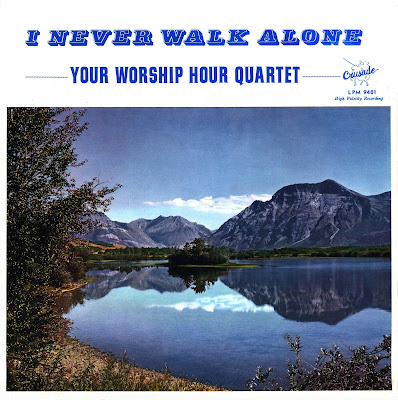 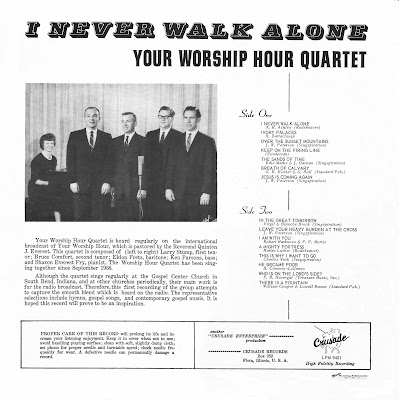 Gorgeous harmonizing, some great songs in the mix, and an expert accompanist on the piano.  An LP this good deserves to be heard, though the playlist does fall a little short in terms of balancing the slow, thoughtful numbers with the upbeat titles.  As a consequence (at least to my ears), things get a little sluggish--or too measured and drawn out--at times.  Otherwise, this would have been a perfect release.  But as is, it's more than worth sticking with, because the best tracks are absolute gems.
In fact, every one of the upbeat numbers is exceptional--Keep on the Firing Line, Jesus is Coming Again, Leave Your Heavy Burden on the Cross, Who Is on the Lord's Side? and This Is Why I Want to Go.  And some of the slower numbers are equally good--in particular, the classic Ivory Towers and Alfred H. Ackley's lovely, concert-style I Never Walk Alone, which I'm sure I first encountered in a Homer Rodeheaver songbook.  I wish I could find that songbook--an initial search didn't turn it up.  This is, I believe, the first recording of the song I've ever heard.  And it's a gem.
Three from today's playlist are the work of Singspiration's John W. Peterson, and if your ears detect a famous Strauss waltz in Peterson's Jesus Is Coming Again, you're almost right--it's actually Emil Waldteufel's 1882 The Skaters' Waltz being paraphrased (unintentionally, I assume).  The second upbeat Peterson gem is Leave Your Heavy Burden on the Cross, which has been a favorite of mine for years, and which should have become a standard.  The remaining Peterson title is Over the Sunset Mountains, which isn't up to the others--too generic, imo.  But Peterson was allowed some duds.  After all, among other brilliant gospel numbers, he gave us Surely Goodness and Mercy.
Your Worship Hour was apparently a syndicated radio show originating in South Bend, Indiana, and these very gifted gents were obviously the featured quartet.  In terms of talent, they're on par with the superb Old Fashioned Revival Hour Quartet, whom they sound a great deal like.  I'd almost think they were the same guys, moonlighting, though that's highly unlikely.

In this LP's arrangement, The Sands of Time had me thinking it was a fairly recent number, but I couldn't have been more mistaken--the melody (by Chrétien Urhan) in fact dates back to 1834, and the text (a very long poem which was adapted as a hymn) was penned by Anne R. Cousin in 1857.  So, recent it's not.  Meanwhile, In the Great Tomorrow (love that title!) comes courtesy of the same team (Virgil and Blanche Brock) who gave us Beyond the Sunset, and I think you'll hear a similarity.  This being a gospel LP, there are the usual errors in the music and text credits, though nothing too outrageous.  Still, I don't know how (or from where) they came up with Edie Marks and J. Olsen for the Cousin-Urhan The Sands of Time, or why there's no author/composer credit for Keep on the Firing Line, which was written and composed in 1915 by Bessie F. Hatcher.  I didn't catch any other goofs or omissions in the notes, though, sound-wise, there are several clipped starting passages.  I promise these were the Crusade label's doing and not mine.  Oh, and as for as mid-tempo selections, the close-harmony version of Martin Luther's A Mighty Fortress is marvelous.  And it's nice to hear this seminal work in a non-SATB setting.  The publisher is listed as "Rodeheaver," and we can only assume that refers to the arrangement, given the work's year of composition (c. 1529).

A superior LP.  Even though the balance of tempi isn't ideal, this is worth sticking with.

I Never Walk Alone
Ivory Palaces
Over the Sunset Mountains
Keep on the Firing Line (Hatcher)
The Sands of Time (Cousin-Urhan)
Breath of Calvary
Jesus Is Coming Again (Peterson)
In the Great Tomorrow
Leave Your Heavy Burden at the Cross (Peterson)
I Am With You
A Mighty Fortress (Luther)
This Is Why I Want to Go
He Became Poor
Who Is on the Lord's Side?
There Is a Fountain

Definitely stock, but I don't know the location. I wonder if the stock image is available at Discogs. (I'm hazy on how to get to that section...)

I think you're thinking of Lists, which are just collections of stuff that individuals have put together. They're not really official, and like you, I dunno how you find one unless you stumble across one someone has put together. Like if you find this record over there, on the right side of the screen down towards the bottom, it will say that it's included in certain lists. One of those might be Identical Covers.