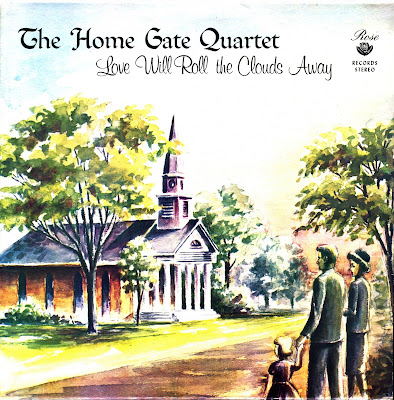 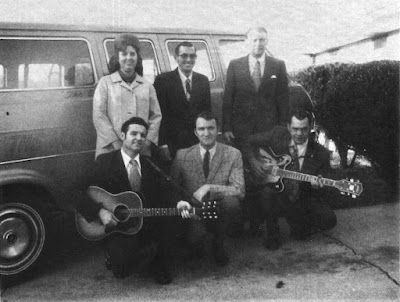 An especially primitive cover design--I love it.  Not much of a 3D feel to it, which makes it kind of interesting--that, and the weirdly proportioned people up front.  Today's group is the Home Gate Quartet, and I'll let the liner notes introduce them: "Playing rhythm guitar and singing the lead is John Vaughn, singing alto his wife, Joyce, both from Somerset, Ky.  Singing baritone is Carl Fiffe from West Liberty, Ky. Singing the bass is Alvin Collins from Harlan, Ky."  In short, you'll be hearing a falsetto-sounding male voice on the melody, and a female alto supporting same (unless the order is flipped).  Now you know.

This is pure country gospel, which is to say it's pretty much bluegrass gospel, only generally slower and minus a banjo or mandolin.  By slower, I mean the rhythm is less pronounced.  The two styles are really very close, and I would have no issue with calling this bluegrass.  Maybe we can settle on country/bluegrass gospel.  Carl Story and the Chuck Wagon Gang rolled into one act.

This gem of an LP is a prime example of the type of "local," small-label gospel I live to find (especially when it's this well performed), and it has introduced me to standards I hadn't heard of.  The Rite matrix #'s (29497/98) place this at approximately 1972.  And so we have songs that were 25 to 35 years old when this was cut--"modern" gospel numbers, as I regard them, since my song knowledge is focused on earlier stuff.  Still catching up with the second half of the last century.

Some challenges with the image editing and rip, since 1) the imperfectly-printed Rose Records labels showed up on my scanner as white with a hundred (or so) black specks, plus 2) the tracks are listed out of order on both the jacket and label.  I searched for credits where none were given, and I found a total of one: Geneva Stroud and Hale Reeves for Love Will Roll the Clouds Away (1946).  And John Baxter, Jr. is allegedly the lyricist on I'm Living in Canaan Now (1938) or else he was doing the publisher-copping-song-credit bit.  Not sure which.  Oh, and I was expecting the famous 19th century Ring the Bells of Heaven (Cushing-Root), but this is definitely a different Ring the Bells...  Fine, toe-tapping number, though.  Actually, I'm not sure the older hymn would translate well to country/bluegrass gospel.

Loved this one.  An interesting contrast to the slick, extroverted Southern quartet fare I've been posting lately.

Love Will Roll the Clouds Away (Stroud-Reeves)
When I Get Home (Reed)
I'm Livin' in Canaan Now (Baxter-Center)
Will Someone Be Waiting (Presley)
Springtime Blooms in Gloryland (Summers)
Praise God I'm on My Way
Last Altar Call
Ring the Bells of Heaven
Working the Road
Mansion in Glory (Shiver)
Rocking on the Waves (A.B. Sebren)
Till I Prayed Thru

Posted by Lee Hartsfeld at 2:55 PM

Lee,
Thanks for thisun, like it! Heard them first on gbugrb, glad to have a complete album now. I've heard of every one of these songs, save for Springtime and Altar. Oh and Canaan is in the Church Hymnal, maybe page 276? Whatever page it's on, shouldn't that give you the credits? Also, the Reed on When I Get Home, is Rosco Reed, from OH, who wrote a lot of great songs in his day, most notably (I believe) is In The Great Beyond, maybe shortened to The Great Beyond. His group was called The Starlight Quartet. There seems to be some disputation on whether or not he wrote Rose Among The Thorns, either him or Earnest Martin. Going for now, Dinner's on the table, love and prayin' for ya!

Hey, what's with the fffff, at the end of the post? And, I might not have gotten the page number right on Canaan, but I know it's in there somewhere LOL! Love and prayin' for ya!

Oops! The "fffff" was just a place marker for the text for when I inserted the images. I forgot to remove it--thanks for noting that! And it's no. 287--that's where I found the Baxter credit. Thanks for the Rosco Reed information. I hope I encounter some more by this group.

Lee,
Here's more and as previously mentioned, the first place I heard this group.

Wonder if y'all shop the same stores or swap albums? Y'all seem to come up with a lot of the same stuff LOL! And, yeah, he gets a little mixed up on one of the above posts, saying it's one song, then posting another. Bless his heart, he does that from time to time. Also and as I've mentioned before, he seems to poke fun at his discoveries, but the LORD has used some of such, to make me (and others, I'm sure) aware of some good groups! One more thing, while I'm here, Vandalia (where this record was recorded) isn't too far, from where my MIL grew up, but she doesn't know the group, understandable though. Thanks for the clarification on the page number, as well. That's my favorite book, but from time to time, Jess still has to give me the numbers too LOL! Supper's close by, so 'til later, love and prayin' for ya!

I think the cover is OK on this one. A little bit impressionist, not bad.

I like it, too. The 2D effect is very efffective.

Thanks! I didn't know such a list existed at Discogs. How did you come across it?

Oooh, nice! I know I see the same covers over and over with Christmas records, but I've not seen a similar thing for gospel records.

Lee,
Gmail's being wonky these days, so just saw these comments. Meant to mention, on Rosco Reed, he also wrote another famous song, On Heaven's Bright Shore. I'm sure he wrote others, just can't remember or don't know LOL! Haven't looked at the cover list (is there text too), but I've heard of such practices, only changing the type and sometimes, almost forgetting to do that LOL! Thanks again, love and prayin' for ya!