Christmas for Christ (probably) 1972--"Time to Get Together" 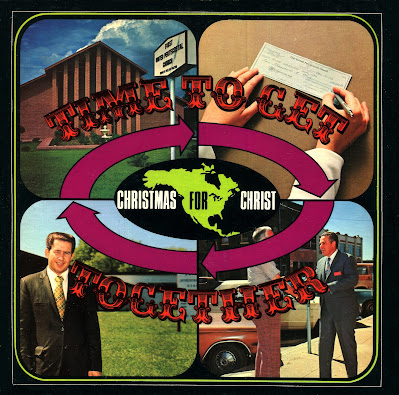 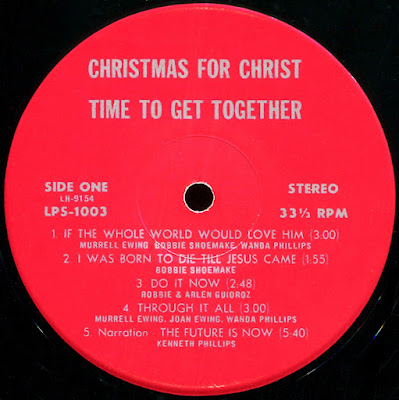 A happy one day after Epiphany!  Meanwhile, thanks to this (and a second) Goodwill-thrifted LP, I now know about the United Pentecostal Church International's home mission fundraising event called Christmas for Christ.  December 17th is the date, and though the inside cover shows money raised for 1973 ($500,000), I'm guessing that this is a projected amount.  I'm going with the front cover, with its photograph depicting a $10,000 check being written to the Home Missions Department--the date: December 17, 1972.  That, plus I have the 1973 CFC LP, and this isn't it.  So, 1972 is my guess.

A glance at the track list reveals that, despite the "Christmas for Christ" theme, the music is not directly related to the holiday--or related at all, for that matter.  This had me puzzled at first.  But the whole idea behind CFC is that the bulk of one's Christmas giving should go to Christ--i.e., to the UPCI--and since Christmas is all (or nearly all) about gifting, the tie-in is logical.  There's also a calendrical logic, since Dec. 17th is close to end of the calendar year, and what better time to talk about future growth ("The Future Is Now")?  So, despite the absence of Nativity-related songs, Christmas for Christ is an ideal Christmas event.  I assume it's still going on in the UPCI.

The songs are very pleasant country gospel--again, with no direct tie-ins to the holiday--and both sides conclude with impassioned, almost frenetic mini-sermons (with music), the second ("The Future Is Now") leaving me lost in its onslaught of metaphors.  That's not a criticism; it's just that I'm not used to this style of preaching.  It's certainly effective.  I can't imagine the preacher putting anyone to sleep.

With its nontraditional Christmas offerings, this LP makes for a neat change of Christmas-posting pace, and I always enjoy learning things about other denominations.  Christmas for Christ was a completely new one on me, as traditions go...

I'm tempted to use "Christmas for Christ" as the label, but it's not really clear if there's a label name at all.  So I simply stuck to the catalog number (LPS-1003).  In the dead wax are the matrices LH-9154 and LH-9155.  The gatefold cover is copyrighted by Unipak, something I noticed as I searched in vain for a label title.

I Was Born to Die Till Jesus Came--Bobbie Shoemake

Do It Now--Robbie and Arlen Guidroz

Through It All (A. Crouch)--Murrell Ewing, Joan Ewing, Wanda Phillips

Narration: The Future Is Now--Kenneth Phillips

I Need the Prayers of Those I Love--Bobbie Shoemake, Wanda Phillips

Don't Let Me Stray Too Far From Calvary--Joan Ewing

Narration: Time to Get Together--Kenneth Phillips

Posted by Lee Hartsfeld at 8:09 PM

Now this is an interesting record. Who is the target of this LP? The layman? The people in the churches? The people trying to carry the message? Is it a premium for a donation? It's weird...

I'm fascinated with your socio/anthropology points here -- Epiphany, money-raising, photographs/graphics, "calendrical logic," country gospel, "frenetic mini-sermons," and (coup de grace) "onslaught of metaphors." You are cooking with gas, my friend. Can't wait to hear this one!

I think the intention is to mobilize the "home mission" Pentecostals, both in terms of giving to the program, and to spreading the gospel. Much of it concerns "planting" churches, to use their terminology. I would assume these went to church members, but that's just a guess. Maybe some were given out to potential members.

The mini-sermons are must-hears. I'll have to say, this LP really thew me with its lack of material directly related to Christmas, but it all made sense when I read up on the tradition. Money-raising is something we associate with the season, after all. But my initial response was, "Where are the Nativity numbers?"

And thanks for the very nice words! I had fun writing the notes.

Yeah, Lee, this one is definitely an early SMG, LOL, but I get their point. Oh and I've heard the music/singing (at least), from cut five, somewhere before, just can't place where. I'll check more of it out, later, but again, thanks, love and prayin' for ya!

Oh and I thought cut seven was entitled I'll Have A New Life, but ya gotta go with what the album says it is, I know, LOL!

I thought something about that title looked wrong! You're right, of course--it's "I'll Have a New Life." Luther G. Presley, 1940. Yes, they were pretty careless with the track listing here, and they didn't bother with composer credits. Oh, well--"Through It All" and "New Life" were easy to i.d., of course. Hope you enjoy.