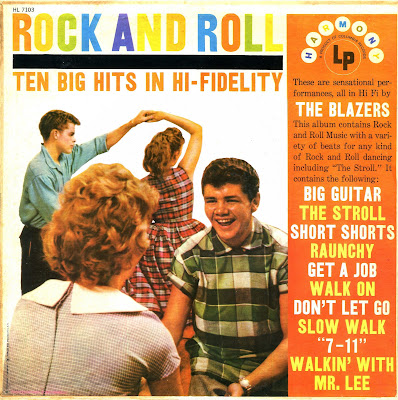 In regard to all the cheap labels I stuck up during Xmas, RobGems68 asked if I've ever given blog space to the major label cheapies like Camden/RCA Camden, Harmony, and (I suppose) Lion--and forgive me if I'm incorrectly paraphrasing you, Rob.  But the answer is, I haven't given them enough of a spotlight, with some exceptions, like this post.  Today's offering should make up for this to some degree--it features the Blazers, which Discogs identifies as "Studio group including American musicians active in France," including lead singer Frankie Tucker. The label is the Columbia budget label Harmony, and, as we might expect, the tracks are very professionally done--maybe too much so.  Which might explain my problem with them--I find them a bit lacking in spirit; a bit boring (Get a Job, in particular, a tune which should practically propel itself).  I guess I'm too used to the superbly arranged, not-quite-rock-and-roll rock and roll covers on Enoch Light's Waldorf labels, as well as the often sloppy but fun SPC fakes (which usually showed up on the Promenade label), not to mention the stuff that showed up on Broadway and Value Hit Parade Tunes (which ran the gamut from fine to pretty bad).  These performances lack a certain edge; they're almost phoned in.  But, of course, that's simply my impression.  It's what's known as a subjective truth, which is a fancy term for an opinion.  Just my take--neither factually right nor wrong.

Just, I guess, to remind the buyer that he or she is getting a budget product, Columbia only included ten tracks--so there.  And, I just can't pinpoint why these tracks miss the mark with me, because on a purely technical level, they're superior, save maybe for some weak vocals.  None of the collision of tempi one hears on SPC cheapies, for example, and overall a sound very much like the originals.  Well, except for the absence of female voices on Short Shorts, which sort of hurts the effect.  Lovers of authentic Short Shorts covers (you know who you are) won't be happy with this one, I don't think.  One track that almost rock a lot: Don't Let Go, a superior Jesse Stone number.  Again, though, something's missing.   The Stroll almost makes it, too.  Maybe it's simply that the genuine cheapies--Promenade, Broadway, 18 Top Hits, etc.--were simply better at being cheap.  Studio musicians assigned to the Harmony label may have wondered what they did to tick off their bosses.  They may not have been giving their best.

Eager to hear feedback on this.  For some, these tracks may work beautifully.  The album might rock the house.  Me, I give this a C+.  I was expecting more drive and excitement, I guess.

In the years to come, Columbia would put out some very fun record club fake-hit collections, including at least one reissue of a U.K. Invasion-era budget gem.

Oh, and cover photographer Fons Ianelli is known for being part of the Naval Aviation Photographic Unit during WWII.  Check out his outstanding wartime photos in Google Images.

Posted by Lee Hartsfeld at 8:40 PM

I love "Don't Let Go" and "The Stroll" (and Mambo No. 5, for that matter), so I'll have to see how well the fakers faked these semi-forgotten classics.

I love how half these songs are basically the same progression. And it took Sil Austin and two other folks to take "The Hucklebuck" (which itself was stolen) and rename it "Slow Walk."

In general, the instrumentals are better than the vocals, although the tempo does tend to drag in some of these. The guitarist and tenor sax are really good. Frankie Tucker's best effort is "Don't Let Go."

Yeah, they're all just 12-bar blues, I think--though I didn't take the time to really notice. And "Slow Walk" does use that "Hucklebuck" gimmick--I was wondering why it sounded so familiar. I agree that things drag a bit--maybe that's the problem.

1/15/22
RobGems68 wrote:
Yep, this is something a major label like Columbia would do when they try to go real low-budget like Pickwick & Grand Award (though to be fair, Grand Award also had a tie-in with the elite Command Label, which was Enoch Light's high quality stereo label for the sound experts at the time with swank hi-fi sets.) Mitch Miller was known as a talented bandleader & A&R man at Columbia/Harmony, but he was also villainized over the years for supposedly hating rock music (and his nasty battles with Frank Sinatra, who never wanted to talk to him again after leaving Columbia for Capitol Records), so a set like this must have been offered as an afterthought for the teenyboppers who didn't dig Mitch's numerous sing-along albums for adults. 10 tracks sounds like a typical budget label plan (though, by 1969, Harmony subtracted one track from a typical budget album down to 9 tracks, long after Mitch left the label.)Never heard of Frankie Tucker & his band, but they are decent, if not perfect. Their cover of "Don't Let Go" won't ever let you forget Roy Hamilton's great version (which happened to be released on Columbia's subsidary label, Epic Records.) and one would wonder what Sil Austin would have thought of this version of "Slow Walk." He probably would have answered "Yeah, but can they play Danny Boy as well mas I can?" Xavier Cugat (another Columbia artist at the time, just as he was about to split to RCA Victor in 1958) would probably had a laugh over this version of "Mambo #5, and The Diamond's "The Stroll" is so superb, it'll make this version of "The Stroll" quite forgettable. By the way, MGM's Lion Records issued many low-budget knock-offs like any other major label who had a budget label, I'm looking for the two "Tom & Jerry" budget albums Lion released around 1957-59, they're pretty rare. Lion Records later got re-named Metro Records in 1962, and continued to put out low budget releases in the US until 1968, and in England until around 1971. Even Frank Zappa got a 2-record set (in England only) on British Metro Records, and is worth finding. Two other budget labels that come to my mind at the moment are Urania (from 1957-1960) and Evon (another Eli Oberstien label. Many Evon albums were formerly Tops or Acorn budget albums.)Of the two, Evon is the cheapest of the cheap, while Urania at least experimented with early stereo sound, and had Ferrante & Teicher on their label briefly.

Yeah cheapies again!!! Thanks Lee. I do realy love them.

Lee,
This is somewhat off-topic, but not, at the same time LOL! You said you haven't devoted much blog-space to labels such as Harmony. Would the Wilma Lee and Stoney Cooper release from Harmony (which I can't seem to find on the blog now, but I've still got the folder LOL) count? Only heard a couple of these myself (the versions from this folder) and of course, this isn't my favorite type of music, but I have heard it over the years and still do, like at work from our local station, I have to agree. The vocal cuts are lackluster and the instrumentals are a little better. Going for now, looking forward to more SMgs, love and prayin' for ya!

Oh and I remember something entitled Mambo No. 5, being popular for a short time (remember there were two versions released, an adult version, with a bunch of girl's names and then a kids version, with those names replaced with Dizny characters replacing the girl names), but don't believe this is where it came from.

This is your cheapies headquarters!

Totally agreed on "The Stroll"--nothing can compete with the originals. But I did want to note that, while they were hardly the norm, there were rock and roll releases on Columbia--The Hamilton Sisters' "Oop Shoop," The Four Voices' "Lovely One," some of John D. Loudermilk's sides (like "Susie's House"), plus some r&r-sounding singles by Mitch's superb pop singers--Doris Day's "Two Hearts" and Tony Bennett's "Close Your Eyes," for instance. I think that if Mitch could have made money off of r&r, he'd have gladly recorded it, despite his dislike for the monotony of the music (or, at least, what he perceived as such.)

I really need to re-up that Wilma Lee and Stoney Cooper LP (unless it's available on CD, which may be the case). I thought about that precise LP in regard to Harmony! If the album's not on CD, I'll do a new rip for the blog. I want to revive my SMG posting the Sunday after tomorrow.

Lee,
I don't believe that WLSC album is on CD now, but don't hold me to it. Only other place I ever saw it (believe I mentioned this on your original posting thereof), was my Pawpaw (Grandfather on my Daddy's side) had it, enjoyed it then and still do! Oh and sorry for my repetitiveness, sometimes I forget what I type, kinda like when I talk, I ramble LOL! Again, looking forward to the SMGs, especially, love and prayin' for ya!

RobGems68 Wrote:
You are so correct about Mitch Miller & the amount of Rock & Roll & R&B he recorded at Columbia, Epic, & Okeh . How would he otherwise tolerate a notorious crazy R&B singer like "Screamin'"Jay Hawkins on his roster at the time in 1956? It's been said that Jay & his band got roaring drunk on the sessions of "I Put A Spell On You" after failed takes of doing it straight, and was reportedly blacked out by the end of the sessions, making grunting noises like a cannibal on one of the takes(which Okeh rejected.) Even when Jay heard the playbacks when sober, he face palmed himself, and muttered "Oh My God...." Mitch & the A&R staff at Okeh let him stay on the label for nearly two years in spite of that crazy session. Mitch had some wild acts on his labels when he wanted to, even if he confessed he didn't like it too much. "It's not music, it's a disease" he reportedly once said in 1956.

Mambo No. 5 was a Perez Prado composition, released on a 1950 RCA International 78 and backed with "Que Rico el Mambo." US bandleader Sonny Burke turned the latter into "Mambo Jambo," and both pieces eventually became popular here. I think Josh may be referring to the 1999 Lou Bega remake of Mambo No. 5.

I had known the Prado composition, but I can't recall from where--maybe the 1950 original. Thanks for the info. As you may know, "7-11" was a hit for the Gone All Stars on the Gone label: https://www.youtube.com/watch?v=ITHm_WYa60A