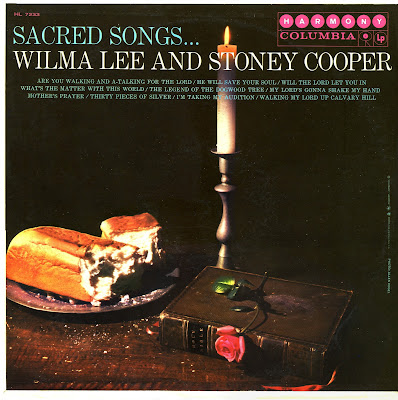 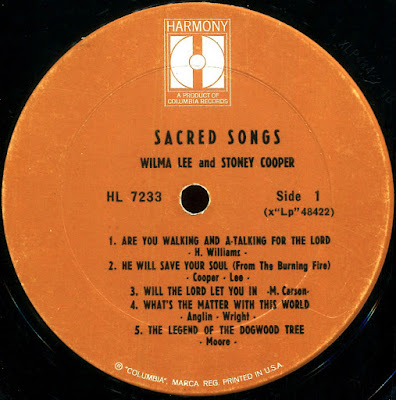 This morning, the return of ten superb 1949-1953 bluegrass gospel sides by Wilma Lee and Stoney Cooper.  The original post and file are long-gone, but you'll be hearing a new rip in (you'll never guess) a higher bitrate.

"Country gospel" would also suffice as a label for these sides, though I think they lean very much toward sacred bluegrass.  Wikipedia reports that Wilma and Stoney had much success on the Hickory label in the late 1950s and early 1960s--these are all earlier Columbia sides, and I found no instance of these tracks on CD, so... I consider them cleared for posting.

These gems are classically old-fashioned and "old time" (aka, old timey)--we're in the realm of Carl Story and the Lewis Family.  The standard bluegrass gospel themes are here--a mother song (Mother's Prayer, 1950), preparing-for-Heaven numbers (I'm Taking My Audition. My Lord's Gonna Shake My Hand {1951 and 1952}), crucifixion-related songs (Thirty Pieces of Silver, The Legend of the Dogwood Tree, Walking My Lord up Calvary Hill {1949, 1950 and 1951}, the "are you going to Heaven?" theme (Will the Lord Let You In, 1954), and the requisite what's-the-matter-with-this-world tune, titled (sure enough) What's the Matter With This World.

Superb stuff, and beautifully remastered in 1960 by Columbia for its Harmony label (it was my great luck to land a mono copy), and if there's better bluegrass gospel out there, I certainly haven't heard it.  My thanks to Josh for reminding me I have this LP.

In the playlist below, I added the original years of issue.  Enjoy!

Thanks so much. Nothing better than these vintage sides.

Lee,
Getting it again, even though my download rate is extremely slow, for some reason. Looking forward to these in a higher bit-rate. Please allow me though, to make a couple observations, that I don't believe I made last time. Not sure who the ten-cup-of-coffee Mandolin player was, but (and even if the echo did contribute just a shade), I'll bet he was wore out afterwords LOL! Another title for What's The Matter With This World, is Too Much Sinning, as sung by The Looper Trio on their (I believe) Life Beyond Death album, they do it with a little more pep and spirit, IMHO. Re: Matter, that intro (Cooper's version) sounds so much like a song they cut earlier in Asheville, NC for Rich'r'tone (however ya spell it LOL), entitled This World Can't Stand Long. Need to go, Barbecue Chicken awaits, love and prayin' for ya!

Josh, I concur--good catch! And I'm wondering if the Clinch Mountain Clan are the extra musicians on a number of these tracks? Some of the original Columbia labels (at Discogs) don't specify.

Sorry about the slow downloads. I don't know why Workupload takes so long! I do have another hosting service I'm going to try, once I rediscover the bookmark...

Lee,
The Clinch Mountain Clan, was the name of their group, even after Stoney's death, which was (ironically), the day I was born, didn't find that out, 'til recently. I believe the Dobro picker, was Josh (who sometimes went by Buck) Graves, who I first heard of with Flatt and Scruggs, then found these earlier recordings, later. I'd guess the Electric Guitar and piano players were studio musicians, can't say for certain though. Oh and on Walking My LORD, that is definitely, without a doubt, an earlier arrangement than the one everybody knows. The latter, was recorded sometime in the 70s(?), with the title being listed as Calvary's Hill, not Calvary Hill. Also, recognize the melody to Thirty Pieces Of Silver? LOL! Going for now, rambled on enough LOL! Thanks again and I still haven't taken the time to hear these higher-bit-rate transfers LOL, love and prayin' for ya!

Excellent record! Thanks for posting it.

This is a brown label issue. I should have inserted an image in the post. It's in the zip file, anyway. What I found surprising was a mono issue on the brown label, as I'm always seeing stereo (and fake stereo) on those.

Lee,
Been meaning to go through these songs and give commentary on the credits (since they're so interesting, appreciate you adding them, BTW), but a lot's been going on. Thank the LORD, we didn't get hammered with the ice they were expecting! Cut one, everyone knows who he is. Cut two, wonder if she went by Wilma Lee when writing, because they were husband and wife, after all. Wonder if Martha Carson wrote cut three? What ya know, Johnny and Jack wrote cut four! Which Monroe wrote cut five? Wonder if Clyde Moody is who wrote cut six? The Fowler on cut seven, has to be Wally, 'cause the only other recording of this song that I know of, is he and his Georgia Clodhoppers. Heard it on the radio one time, back during Desert Shield/Storm. Never heard the flip though, Propaganda Poppa, says recorded in 1944, possible. Could the O'Dell on cut eight, be Mack? Have no idea who the folk on cut nine are. There's another Moody on cut ten, different letter, maybe an AKA. Lunch just arrived, so 'til later, love and prayin' for ya!

I just added a label image to the post.

Hi, Josh. Apparently, it's Clyde and Ruby Moody, respectively. Never heard of Ruby! But that's what it says online.

LOL, roger on that! Thanks, love and prayin' for ya!

2/4/22RobGems wrote:
Wow, a brown label Harmony in mono. it must have been released in early 1967, for that was when Columbia started using the brown label for Harmony Records. Mono Harmony albums from 1967 are quite rare, since Columbia stopped issuing Harmony albums in mono by the end of 1967. I notice in my collection that 1967 Canadian Harmony albums use a black label with silver print, though it still uses the "H" logo.