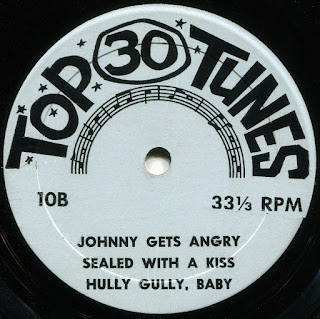 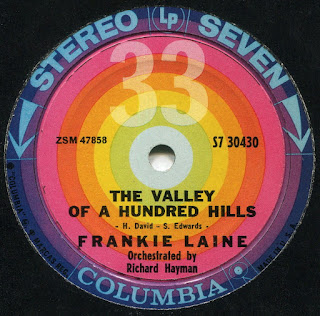 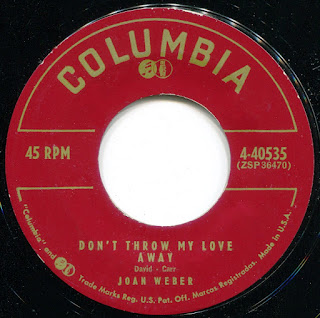 As she did last year, Diane reminded me that May 25th is Hal David's birthday--his 101st.  So I'm reposting my 2021 tribute.  The original text follows, plus a new link.

Here are sixteen Hal David goodies, all with composers other than Burt (in particular, Leon Carr and Lee Pockriss) and spanning the years 1946-62.  The best of the images has to be the Top 30 Tunes label for Johnny Get Angry, with its amusing typo, Johnny Gets Angry (I retained it in the listing).  And I was surprised to discover that Hal had penned, not only the lyrics for that 1962 Joannie Sommers hit, but also the words for 1959's My Heart Is an Open Book.  That one also appears here in fake-hit form, courtesy of the Broadway label.

The most unusual (as opposed to the silliest) selection in our list has to be I've Got a Walkie Talkie, a 1946 George Olsen side crooned by Judith Blair;  It's in a Guy Lombardo big band style (George, what happened to you?), badly recorded for the Majestic label (I had to do some artful re-EQing), and the lyrics aren't Hal's best (even with such a promising title; not), but the notion of a walkie talkie functioning, in effect, as a modern cellphone is interesting and weird.  1949's I Wish I Had a Record (Of the Promises You Made) is one of my favorite Perry Como sides, and it's easy to imagine this number doubling as a country novelty.  Mitch Miller's Orchestra accompanies Kitty Kallen on Mother, Mother, Mother (Pin a Rose on Me), and so we know Miller produced the side, too.  I'm not crazy about the tune, but we can hear hints of Hal's brilliance with words--it's a light novelty number, but there are many clever turns, and we have an early example of Hal telling a story in lyrics.  So, Hal was a storyteller even before he met Burt--cool.  Little Crazy Quilt is highly competent but unexceptional (though the superbly versatile Page is always wonderful to hear), and Goo-Goo Doll is... extremely not serious.  And unfortunately (for camp's sake), it's neither technically bad nor in especially bad taste--it's  merely harmless.  As a novelty, a letdown, iow.  But Hal certainly did a good job tailoring the lyrics for Steve Allen's sense of humor, which was never what we could call evolved (or funny).  And did goo-goo dolls actually sound like that?  I recall that the peacocks who used to roam my yard sounded exactly like the sound effects at the close.

Seven Pretty Dreams is Hal back in storytelling mode, with a lovely melody to match, and the text is simply beautiful.  Betty Johnson's elegant vocal and Hugo Winterhalter's accompaniment make this Grade-A 1950s pop.  Eydie Gorme's A Girl Can't Say has tune writer Leon Carr playing Bacharach-style tricks with the phrases, and the result is fascinating.  I didn't know anyone was fiddling with form to quite that extent in pre-Burt days.  Hal's words are expertly clever.  I Came Back to Say I'm Sorry is like an R&B shuffle slowed down to 16 rpm, but after my initial reaction ("Ugh!"), I've come to like this performance.  Phoned-in lyrics, but that'll happen whenever someone's output is as huge as Hal's. The Boy on Page Thirty-Five is clever enough, though it sounds like something Hal could have dashed off while taking a snooze--too ordinary an effort, in this blogger's opinion.  My Heart Is an Open Book, luckily, is a big step up, and here we have a melody as memorable as the lyrics--even this fake hit version scores well.  Also from 1959, maybe my all-time favorite Frankie Laine side, The Valley of a Hundred Hills--a pop masterpiece on all levels, and the perfect marriage of melody and lyrics.  Again, Hal is telling a story, and a memorable one.  This could easily have been throwaway fluff; instead, along with Geisha Girl, it's the best offering in the list, imo.  And the stereo sound is wonderful.  There's nothing quite like a 7" stereo single.

Unloved and Maybe Tomorrow (But Not Today) are not examples of Hal-quality Hal--the latter is especially annoying.  But the closing number, 1962's My Geisha, with its lovely melody by Franz Waxman, mostly atones for the two clunkers--Hal's lyrics can't be called inspired, but they're expertly done and possess a David-Bacharach kind of elegance.  Meanwhile, Jerry Vale's vocal is superb.  The side is too beautifully done to write off as fluff, and I suppose the lack of lyrical depth is inevitable, since it's a title song for a movie.

A Happy Birthday to a superbly gifted wordsmith, whose best work will hopefully be remembered for decades to come. 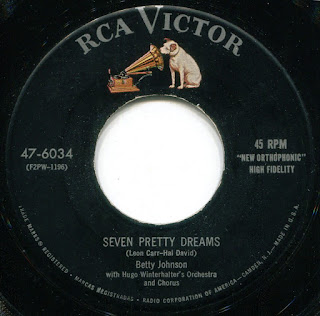 Posted by Lee Hartsfeld at 3:59 PM

Excellent stuff, again. As I probably said last year, when are you going to revisit your extensive Burt collection???

Thanks. And you're right--I need to get on that.

Really Great! One of the best you posted!

Thanks (again), Lee! I always know whom to turn to for the best of Burt AND Hal. And I agree with other commenters -- what the world needs now is more Burt. Please.