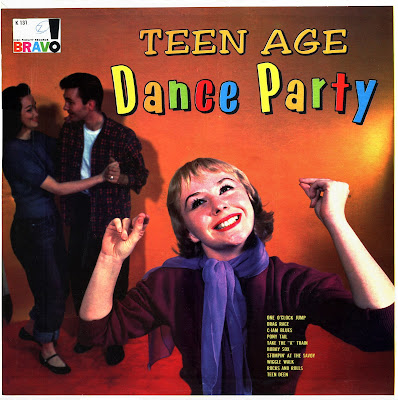 So, was there really a "Bobby Krane"?  Well, in this case, Bravo (Pickwick) has juxtaposed big band recreations (source unknown) with hard-rocking numbers, the latter having been traced to a group of Gateway Records singles credited to "Lindsey Powers," who was actually saxophonist/bandleader Buddy Lucas.  Given the casual fashion in which Bravo slapped the "Bobby Krane" credit on the Lucas tracks, I'm inclined to suggest that there was no Bobby Krane.  Also, Krane's name was used by Pickwick as the catch-all orchestra leader for its sound-alikes, even on sides which feature no orchestra.  That, imo, is a red flag.  "Bobby Krane" may ultimately be as useful an appellation as "Vocals and Orchestra by Popular Radio and Television Artists."

Anyway, I truly enjoy this thrift gift from Diane (thanks, Diane!), and it's partly because, and not in spite of, the clash of styles throughout.  Other listeners may find that contrast difficult to deal with--as ever, it's your call.  But, at the very least, this budget release is a classic example of a cheapie label taking a "What the heck?" approach to a playlist, with little thought given to the packaging of big band-era material under the title "Teen Age Favorites."  I mean, Take the "A" Train was a teen age favorite at one time in pop history--just not in the mid to late 1950s.

On the other hand, Bravo could have done worse by, say, combining the rocking Buddy Lucas tracks (which sound like a more hardcore version of Bill Haley and His Comets) with, for example, accordion favorites or sing-along selections, which would have really made things incongruous.  At least big band is related to the rock and roll style of Buddy Lucas--a style which goes back to the late 1940s, if not earlier.

I needed to make the cover a bit darker to match the real thing, and I assure you that the smiling blonde (who also appears on the cover of the Design label's Rock 'N' Roll at the Sugar Bowl--same pic) looks just as harshly lit in both a lighter and darker Photoshop adjustment.  The Sugar Bowl LP is credited to "Big Luke" Sykes and His Orchestra, whom I'm told is also Buddy Lucas, but my copy is too beat-up to even attempt a listen, let alone a rip.  Anyway, Teen Age Dance Party must have confused any and all teenagers who heard it, though to what extent, we can't know.  Its possible that the purchasers of 99-cent LPs had come to expect less than truthful packaging, which is often the price buyers paid for spending less on their vinyl.

Come, revisit the big band and early rock and roll eras with Bobby Krane, whoever he was, and Buddy Lucas, known as "Lindsey Powers" on Gateway (his sides given the year 1955 at Discogs).  It's amusing that Bobby Krane gets the main billing, even though the Lucas tracks outnumber his by 6 to 4.  Just another waltz in the budget-label park!  A zone in which the goals were to 1. provide entertainment and 2. save money--in the reverse order.

Oh, and I have no idea what Teen Deen could possibly mean.  Any thoughts?  Maybe it was supposed to be Teen Den and someone accidentally added an e?

UPDATE: My thanks to musicman1979 for leading me to the most likely source for the four "Bobby Krane" sides--the Stanley Applewaite Prom Date LP, on Design DLP 23.

Stompin' at the Savoy--Bobby Krane and His Orchestra

Bobby Sox (All Gone)--Buddy Lucas and His Combo

Take the "A" Train--Bobby Krane and His Orchestra

Wiggle Walk--Buddy Lucas and His Combo

One O'Clock Jump--Bobby Krane and His Orchestra

Drag Race (Round Robin)--Buddy Lucas and His Combo

Rocks and Rolls (Blazing Home)--Buddy Lucas and His Combo

Teen Deen--Buddy Lucas and His Combo

Posted by Lee Hartsfeld at 2:16 PM

The juxtaposition of big-band and rock 'n' roll items is odd on this and similar LPs, but I wonder if the company was trying to attract both teens and the older generation. (I suspect they just used whatever they had on hand.)

I tend to go with your second suggestion--they needed filler, and so they grabbed the big band tracks because they were there, basically.

I do think that Bobby Krane is a made-up figure--the most common LP from this "gentleman" that I have seen at the thrifts (and is in my collection) is a Tribute to Tommy and Jimmy Dorsey LP on both Bravo and International Award. It contains tracks that were on two Design LP's that were labeled as by "Stanley Applewaite" that were Glenn Miller tribute albums, and a "So Rare" that was more in Jimmy Dorsey's original '40's style that also showed up on a Sutton "Salute to the Big Bands" LP. The only original cuts were the Tommy Dorsey numbers while the Miller-style cuts from the Applewaite LP's was pure filler. Bravo also released two Glenn Miller tribute LP's under the Bobby Krane moniker, with several Public Domain cuts. Pickwick later leased the tapes to Premier's Coronet, who also released the Dorsey tribute LP with no name. Hope this helps you out.

A million thanks! You've identified the source of the four "Bobby Krane" tracks on this LP--they're from the Applewaite LP, "Prom Date," which I used to have (but which, for some reason, I don't now). Very cool that Pickwick leased some of the big band material to Coronet--as you know, the trading of tapes between the different label groups can be a headache to the jobber-rack LP fan!

By the way, are you aware of the "Brand 'X' Records" FB group? You'd be a perfect fit, I think!

This is so fun, Lee! Glad you got it ripped. I'm enjoying the Brand X group, too, so thanks for turning me on to that.

Thanks for the kind comments!! I have never heard of the Brand X Facebook page, So I will have to check it out. Happy Armed Forces Day, and thank you again for your years of service.

Here is an E-Bay link to the Dorsey LP. It turns out only half of the Pickwick cuts are on the Coronet album. It also turns out that they were some Jimmy Dorsey fans among them, because there are tunes on here that he made famous, like "The Breeze & I" which is perfect for a cheapie label like Coronet because it was based on a Public Domain classical melody. I had this record in 1995 and purged it a year or two later until I got the Bravo Pickwick LP in 2005. I enjoy sharing my many years of collecting experience with anyone I can--been seriously collecting vinyl since 1989 when I turned 10 years old!! Hence my screen name.

I think you'll really like the Brand X page. Thanks for the link--looks like some of these cuts were used for both Dorsey and Miller tributes (they pulled double duty). Talk about cheap! And thanks for the Armed Forces Day wishes.

You are welcome. Hope it was a good one for you.

The Rock and Roll cuts on this LP were also re-used on a Ray Charles Design LP as instrumental filler "Blues" cuts as labeled as by "George Brown's Orchestra". As I was listening to these cuts on your blog, I got this case of Deja Vu that I heard these songs before! They even retitled and reused thsee songs on a Design Discotheque LP that I had in my collection for a hot minute before I purged it.

Cool! Thanks for that info. I knew that the Buddy tracks made the cheap-label rounds, but I didn't know they'd ever been credited to "George Brown's Orchestra." Kind of hilarious, really!