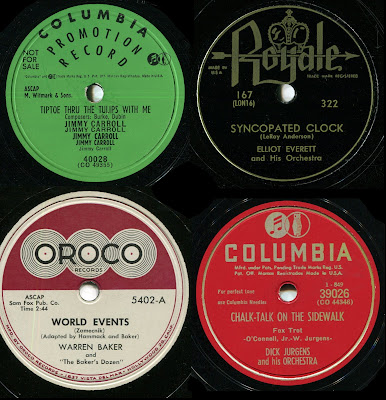 And the return of Elliot Everett.  What a playlist!  78s all, and all from my collection.

We start with Jimmy Carroll, whose name can be found on the Bell, Golden Records, Columbia, Mercury, Cook, and Decca labels (the man got around), and who may be best known for his arrangements for Mitch Miller, including the ones on Miller's "Sing-Along with Mitch" LPs.  But please don't let that stop you from listening to his amazing multi-tracked clarinets on Tiptoe Thru the Tulips with Me and Clarinet Polka, both from 1953 on Columbia.  1953 was early in the multi-tracking game, and these sound incredibly clean and well balanced, so you've got to wonder what kind of equipment they were working with.  You'd expect more generational loss if they were going from tape machine to tape machine.  Anyway....

Guy Mitchell recorded for King as Al Grant, and these two 1950 King promo sides, while in perfect shape, aren't exactly Columbia quality, sound-wise, but they do the job.  Here are the label scans, both of which include a short bio of Grant (Mitchell, whose real name was Al Cernik): 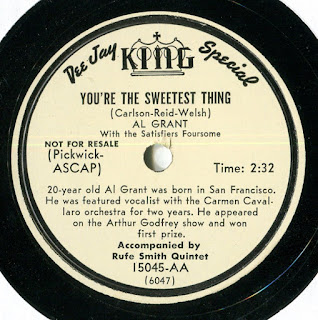 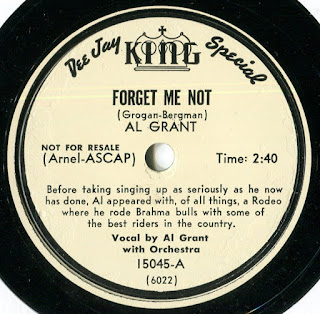 Since these are radio promos, I was expecting better sound, but life is full of surprises.

"Elliot Everett," performing here on the Royale label, is actually a portion of the label owner's name.  Who knows who this really is?  Fun version, nicely recorded (especially for Royale), and with a slight swing.  Nice.  I used my 3.5 mil stylus on this worn sdie.

Back to Guy, who sings here under his real name, Al Cernik, for Carmen Cavallaro.  He shows up again on the fourteenth selection (Encore, Cherie), my favorite of the trio.  Al's voice is just fabulous.  The perfect band singer, and just as big bands were going out.  But it worked for him, as he got bigger than big on Columbia as a solo singer.  Encore, Cherie, by the way, was composed by J. Fred Coots, who also gave us the slightly more famous Santa Claus Is Comin' to Town.

Chalk-Talk on the Sidewalk I bought for the title--turns out to be a very pleasant side, too.

The family-hour novelty, The Honey-Dripper, really rocks in this 1945 version by Sammy Franklin and His Atomics.  Who were they?  I have no idea--look them up.  Got fine sound using VinylStudio and my wider stylus.

Cousin Joe is nothing but the low-down blues, and I had to laugh at Old Man Blues, but not because I'm getting old and I relate to it or anything like that.  The Al Casey Quartette is fine.

Alabama Jubilee, a worn disc my 3.5 stylus did wonders for, is on the fake-hits label Tops, though I'm not positive who's being copied here.  Red Foley?  Probably.  World Events, presented here in easy-listening fashion, was used as the theme music for Movietone News newreels, which means nothing to us modern, post-newsreel people, unless we frequent weird-music blogs like, oh... hmm.  Can't think of any specific examples, offhand.

Sixty Seconds Got Together has timeless lyrics, and the singer is Eddie Howard.  So who can complain?  The lyricist is Hal David's brother, Mack.

To the music: Jimmy Carroll

So fine! another solid presentation of the fifties, no-one does such a great blog!
My favorite is in this list, the "Alabama Jubilee"!
A great follow up to "Too old to cut the mustard" by Bob Sandy and Mimi Martel.

These all look fun. Have I overlooked the Billy Murray? I find your blog to be a wonderful delight and love your commentary too. Thank you for all you do for us out here in the dark.

Sure! And thanks for mentioning Billy Murray--he was on the playlist, but it was too long, so I deleted him. Sorry about that!

I'll have to do a separate Murray post. Glad you're enjoying.

Thank you so much for your playlists. Especially the one
named Jimmy Carroll, as I there found
Al Cernik (Guy Mitchell), w. Carmen Cavallaro - "I Go In When the Moon Comes Out".
I have been looking for that one the last 20 years.
With the same persons I have "Evelyn". Let me know if you want it.

Glad you enjoyed! I've got "Evelyn," but thanks for the offer. I found it last year, I think.