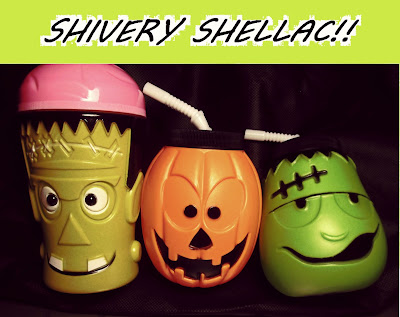 Above: Your hosts for "Shivery Shellac"--two Frankies and a demonic-looking pumpkin head, with the first Frankie's brains evidently not yet in place (yuck!).  I didn't notice that until I snapped the shot.  The first Frankie must have posed for the tumbler before he was fully assembled.

I was going to bow out of Halloween posting this year, seeing as how I have little to no new material (Halloween sides are much harder to come by than Xmas stuff), but a couple days ago I was listening to last year's "Haunted Victrola" posts, and I wasn't happy with the rips.  For some reason, over the past few years I had taken to eliminating the low end (such as it is) on my acoustical 78 rips, and that naturally leaves things sounding tinny (which is fine if you want a gramophone-type sound, but...).  This present series of rips is hopefully much better, with more bodies.  Er, I mean, with more body.  To the sound, that is.  More body, more gloom.  I mean, boom.  Plus, I think my rips--of big band-era tracks, especially--have better-chosen response curves, my having had (by now) a few years or more practicing with my VinylStudio.  My VS program has a good number of preset curves, but I find myself doing a lot of modifying (and even working from scratch, at times--no pun intended).  It's gotten easier over the many months.

Tomb--er, tomorrow, I hope to have another group of Halloween 78s ripped'n'ready, because no group of revised October 31st rips are complete without The Ghost of the Violin or Spooky Spooks (if I'm able to clear the way to my crate of 12-inchers).  And, ironically, one 78 that seems to be hiding out on me: The Sneak.  I guess it takes its title seriously.

Of the twenty-two tracks in our slaylist, some titles are full-Halloween: Greenwich Witch (two versions, including Zez Confrey's own outstanding piano solo), Witches' Dance, The Hoodoo Man, The Merry Ghost from Chatham Square, for example.  Other titles suggest Halloween, even if they're not full-Halloween:  I refer to The Vamp, Which Hazel, Love Him So Much (I Could Scream), and a few more.  And there are yet others which might be called a session on the rack--a stretch, in other words.  These include Murder, Animal Fair (great, surreal sound effects), Danger, and Magic Eyes.  To this blogger, these are all Halloween titles, even if not, in every instance, full-Halloween.  And I believe I made up that term, though I haven't Googled it to be sure.  "Full-Halloween" doesn't have the sound of a commonly used phrase.  "Shall we go full-Halloween this year?"  I don't think people say that when discussing costumes or decorations.  But, then, I don't know.

All ripped and restored by me from 78s in my collection.  Not ripped in the 1970s/1980s gore-movie sense, of course.  Speaking of which, I have one of those 50-movies-on-twelve-DVD sets which includes 1981's The House by the Cemetery, an Italian flick set in the U.S. which is very creatively done and well photographed but 1) pointlessly gory, 2) badly and/or incoherently plotted, 3) on top of all that, choppily edited, 4) poorly dubbed, and 5) pretty stupid, however genuinely spooky some of the scenes.  There are movie fans who love that type of disconnected and illogical Italian horror, and (at least on line) they treat it like great art, but I'll take Ed Wood, Jr. and Larry Buchanan.  And I won't even pretend their stuff has any artistic significance.  But, back to topic--enjoy today's shivery shellac!  Have a boo-delicious time!  Stay tombed for (possibly) more shivery shellac. 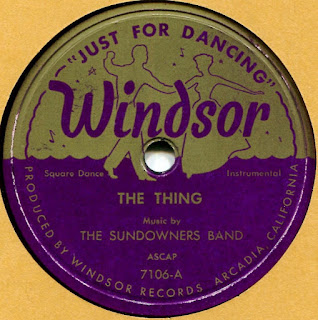 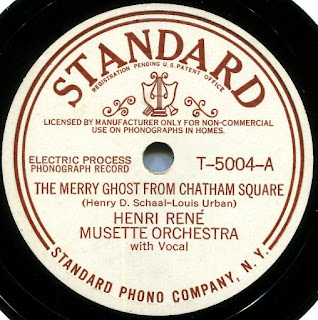 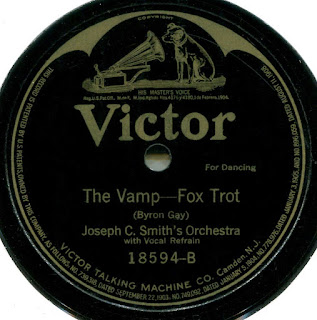 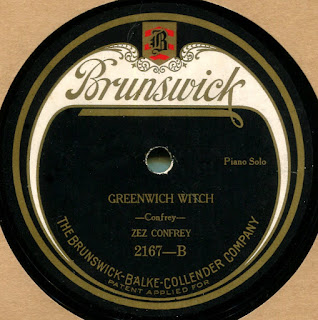 How did I miss this post? And there's already a part 2!! Thanks Lee! Happy Halloween!

Interesting selection. It's not often than you find Leopold Godowsky and Zez Confrey in the same collection.

Thanks! Happy Halloween to you, and I won't drag out the pun adjective "spook-tacular." Playlist-wise, a Godowsky-Confrey duet would be even more novel!