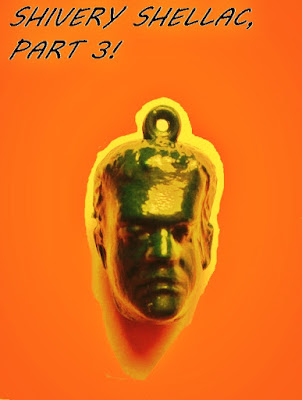 A cryptful of shiver-producing shellac, and I had a devil of a time finding my copy of Spooky Spooks, that 1916 classic by Charles Prince's A. Band.  And, wouldn't you know it, the first place I should have checked was exactly where the thing turned up, but did I look there first?  No, of course not--I went through my entire 12" 78 stash--twice, no less--before checking my first choice.  There's a moral there, someplace.  You've heard, "It was in the last place I looked" (which some regard as redundant, since, as a rule, people stop searching once they've found something), but this time, it's "in the first place I should have looked."  A lesson for us all.  Go with your guts.  And not in the gore-picture sense.

So, I need to hurry here, lest I drive myself sane.  And, you know, I was afraid I might end up with thirteen tracks in this list (I'm not superstitious, but...), but I wound up with fourteen, so... whew!  I'm in for good luck on Sunday, I reckon.  Frankie says, "Arrrrrghhh!!"  I'm sure we all appreciate his input.

In the scary-titles-for-music-that-turn-out-to-not-be-scary sweepstakes, the winner has to be 1955's The Theme from Dial "M" for Murder, which starts out in a horror vein but quickly moves into a Morton-Gould-mood-music mode.  Nice selection, but it must depict one of the less suspenseful moments in the Hitchcock film.  And we have one of my best-ever thrift finds--the "Theatre Lobby Spot" for the classic Japanese horror flick, The H-Man (1958).  I presented it in a single file, though it's really two bands on (what looks to be) a vinyl 78, with no lead-in groove to the second part.  I spliced them together, shouting "Live! LIVE!" having forgotten, for a brief moment, that I'm not Victor Frankenstein.  We have some concert "horror" fare, too: Rachmaninoff's C-Sharp Minor Prelude, as played by Marek Weber's orchestra in 1928, Manuel de Falla's The Fire Dance, as conducted by Eugene Goossens in 1928, and Chopin's famous Funeral March, Op. 35, as played on the pipe organ by Mark Andrews in 1928.  Clearly, 1928 was a good year for spooky background music.

And we have (straight from the 78) Beatrice Kay's 1947 Hooray, Hooray, I'm Goin' Away, which very possibly influenced a certain 1966 novelty hit.  Plus, a companion piece to last post's Little Nell--another mini-melodrama called No! No! A Thousand Times No! as provided by Harry Reser's Orchestra in 1934.  On the Level You're a Little Devil (no comma in sight on the label) is a 1918 novelty that'll have you saying "Awwww."  Or not.  1919's A Cat-Astrophe features cartoon sound effects before there were such things, and Vamp Me is yet another charming Byron Gay novelty from the days of the proto-big bands (as in, 1922).  Then we have the wacky 1907 novelty Gesundheit! (To Your Health), because nothing says "Halloween" quite like sneezing.  (Wait a minute...)  Actually, I'm not sure why I included this one.  Wait, I know--it puts the playlist count up to fourteen, from thirteen.  That must be why.

Posted by Lee Hartsfeld at 6:16 PM

I appreciate you so much. I particularly like the obscure southern gospel recordings you rip.

But I just want to be frank and say I don't download these group rips because they aren't completely tagged or have the embedded art for each track. It takes quite a long time to sort it all out if I were to do so.

But thank you for everything else!

Yeah, I enjoy the film Dial M for Murder, but the music is blah. Hitch did better when he employed Bernard Herrmann.

I wasn't expecting Eugene Goossens to turn up in your Halloween selections. Not sure what I was expecting, but it didn't involve Goossens.

YES I THANK-YOU LEE FOR THIS 3RD INSTALLMENT OF TUNES THERE GREAT. LOOKING FORWARD TO YOUR NEXT MUSICAL TUNES WHEN YOUR ABLE TO POST THEM. STAN

Happy Halloween Lee! I appreciated the songs the 1st time through: I am even more impressed with the sound you pull out this time around Great stuff!
- Steve in PA

Great stuff, Lee, third time's a charm! Sorry I didn't get to this until after the holiday, though. Sunday involved lunch at Chili's, and the rest of the night was spent running back and forth to the toilet trying to get it all back out of me. I hate when that happens. :(

Thanks, everyone! And sorry to hear about your Chili's experience, Ernie. And on Halloween!