An assortment of 19th century Santa illustrations--repost from 2014

NOTE: This is a seven-year-old repost, and the scans are my own, all taken from old, old magazines and books presently taking up much space in my bedroom and Media Room.
So, Coca-Cola came up with the fat, jolly, human-looking Santa in 1931, eh?  Riiiight.  In fact, here's our man in a Dec. 11, 1884 Youth's Companion ad, dropping Waterbury pocket watches onto the Earth from a considerable height.  (Imagine the size of the impact craters when those things hit!) Is it just me, or does Santa look like he's about to be gored by one of the rear reindeer? 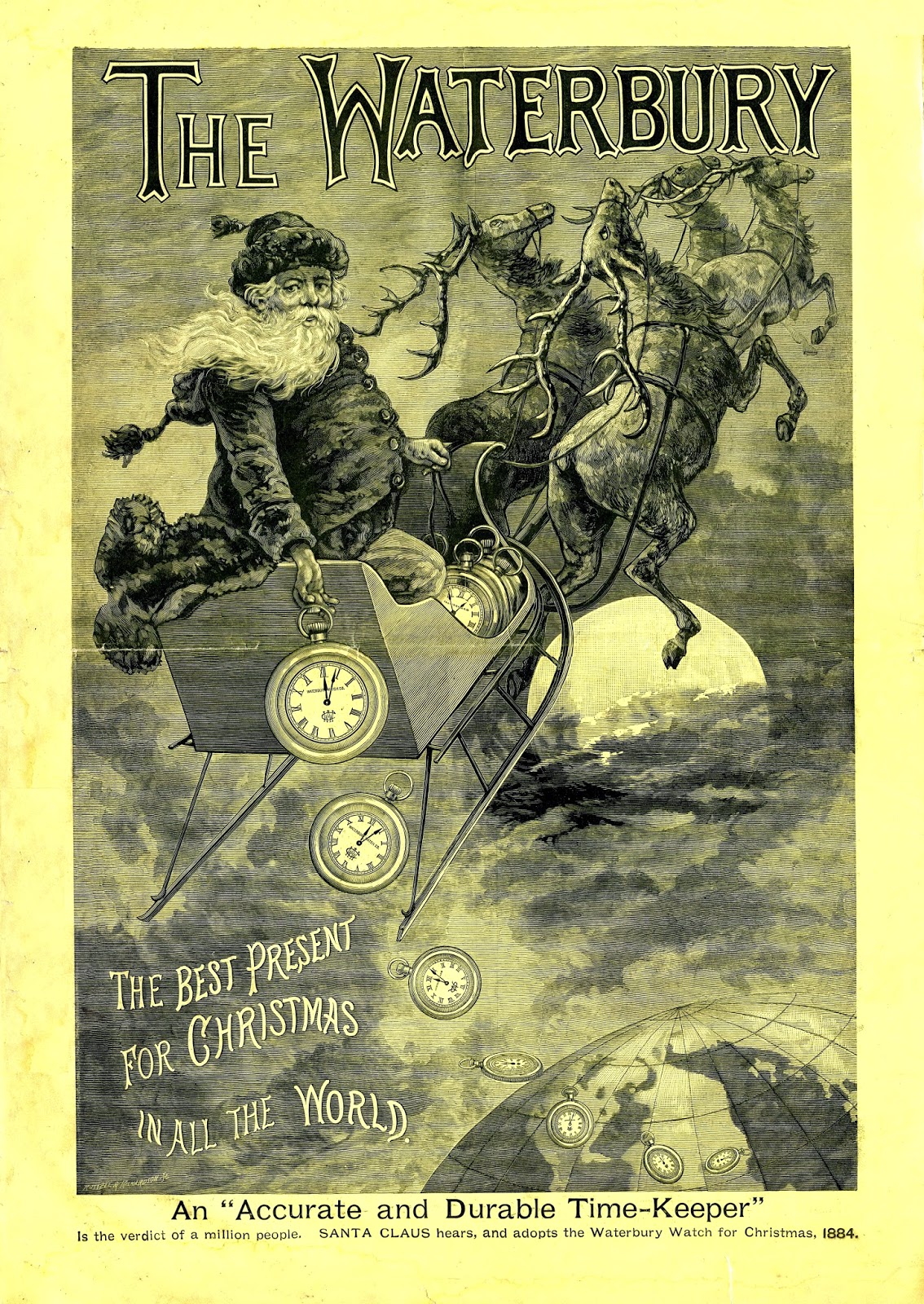 Next, a more Father Christmas-looking Santa ("tall and wrinkled and gray"), from the children's book, Evening Entertainments (W.B. Conkey, 1899).  Very interesting text, no?  "Your mammas have told you, I have no doubt, Of what the Christmas is all about."  The Christmas??  Anyway, this poem, which connects the Nativity with Saint Nick, sounds like it was written for Cab Calloway: 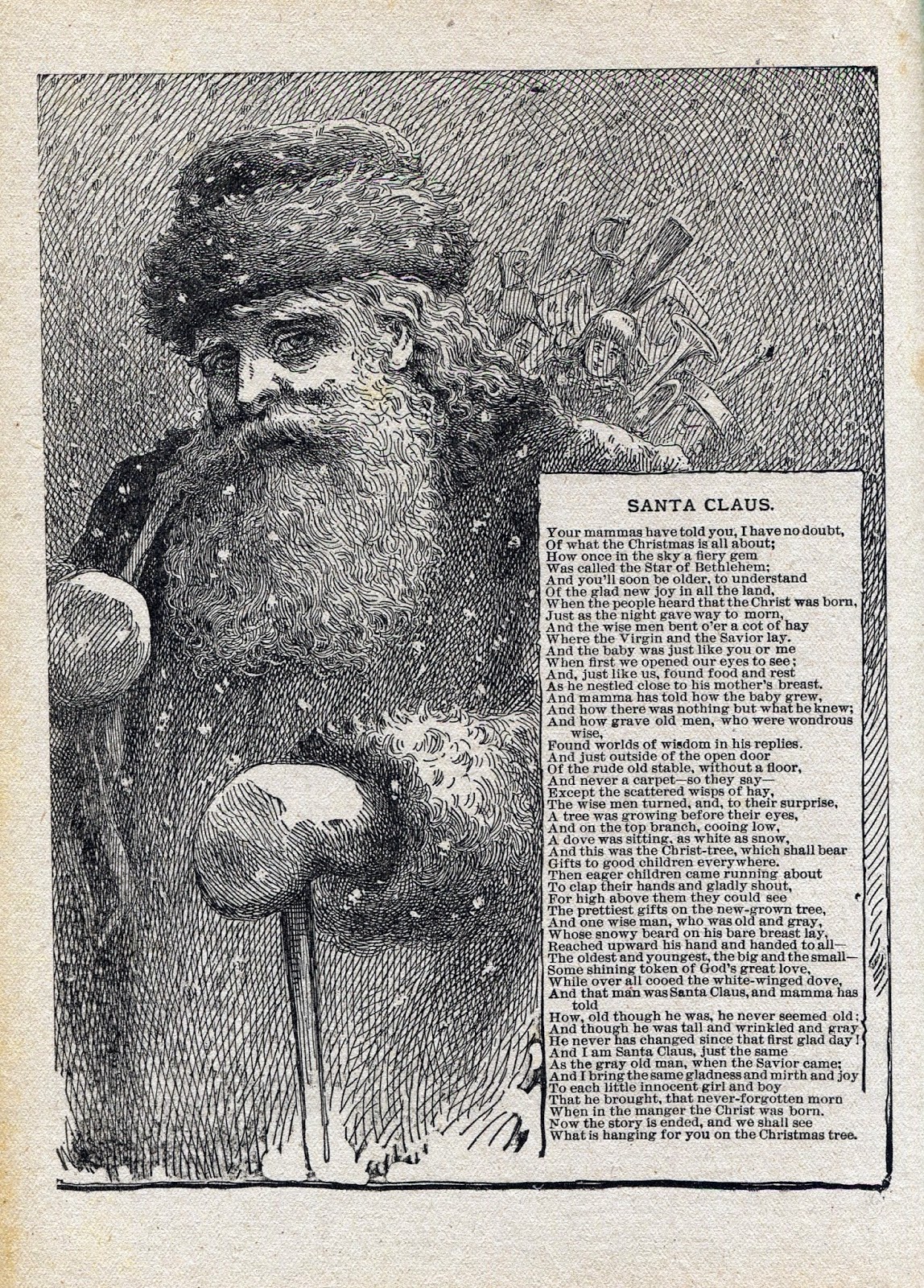 Regarding Santa and the Nativity, please note that folklorist Jack Santino--a former editor of the Journal of American Folklore, former president of the American Folklore Society, and famed holiday expert--regards Santa Claus as "primarily a Christian tradition" (New Old Fashioned Ways: Holidays and Popular Culture, 1996).  In distinct contrast, I might add, to stand-up comic Tina Dupuy's assertion that Santa is secular as can be.  Now, that's a toughie.  Who do we believe?  The stand-up comic or the scholar?  Hmm.

While we're pondering that, here's a rendering of Santa, sleigh, and reindeer from the same collection.  To my eyes, this could easily pass for a Mike Peters cartoon:

No date on this next kiddie publication (below), but I'm guessing late 1800s/early 1900s.  As you can see, my copy's had a rough existence (not at my hands!), but simply by having survived in any condition, something this old and cheaply made has beaten the odds: 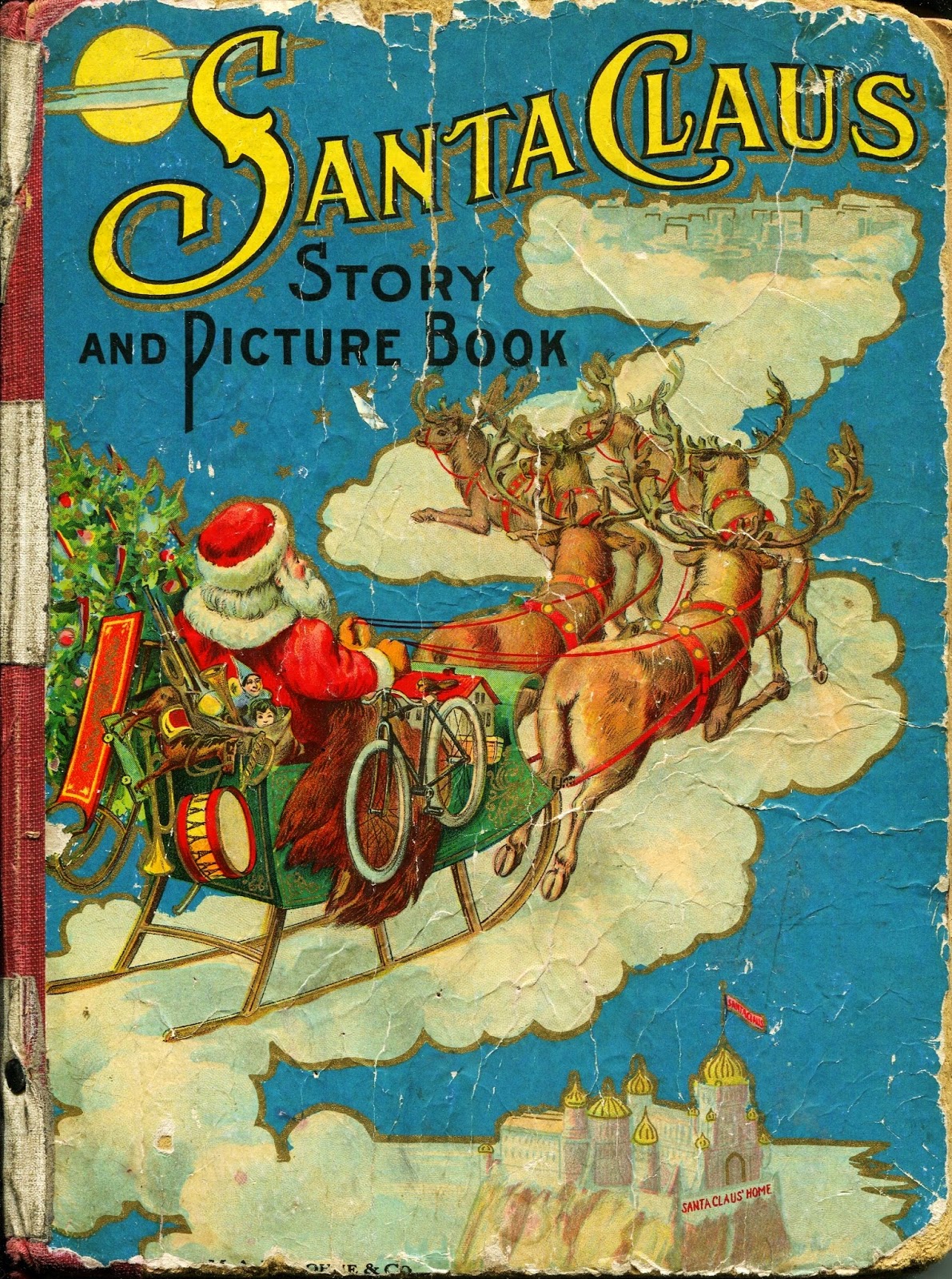 We see, as ever, a 19th century Santa Claus instantly recognizable as same by modern eyes, but the really interesting thing is the amazing structure below the clouds, labeled "Santa Claus' Home."  Notice the Turkish look of the architecture?  Given St. Nicholas' place of origin, that makes perfect sense.
Here's a lovingly restored (with Paint) close-up: 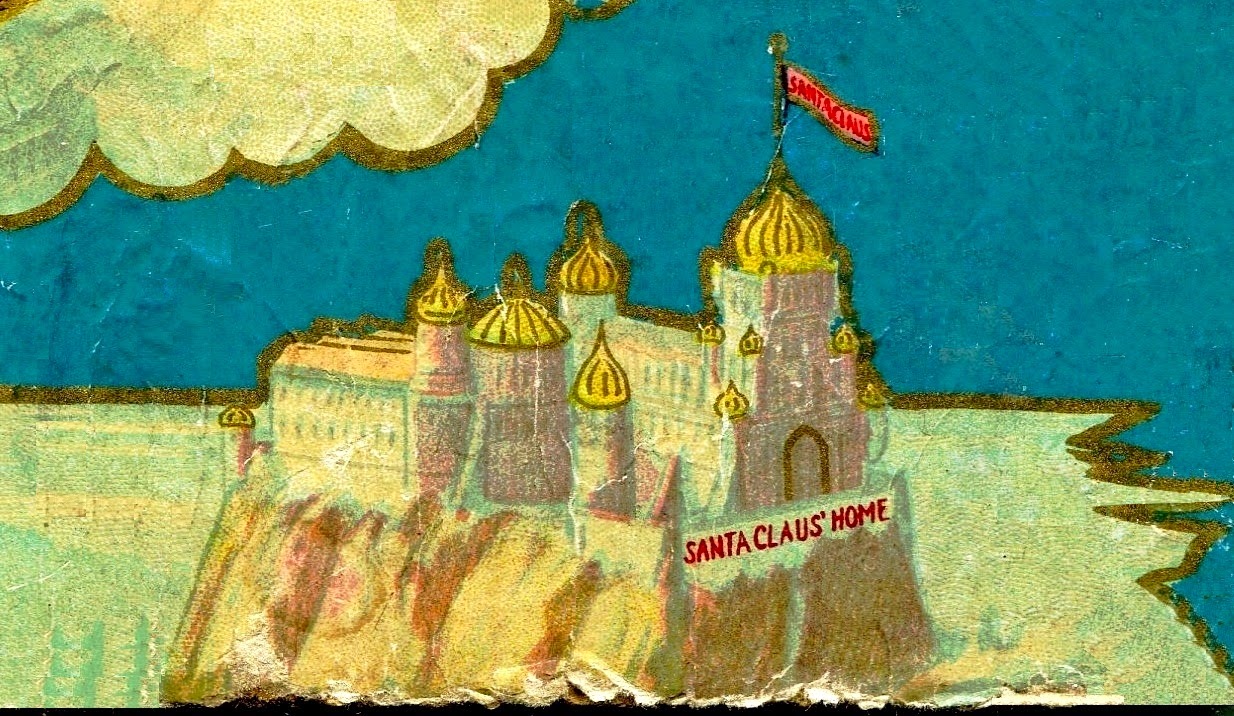 Also interesting is the possessive apostrophe after "Santa Claus."  By modern standards, this is amazing on two counts: 1) it was used at all, and 2) it was used correctly--i.e. after, not before, the s.  You know we're looking at another era's work.  Today, this structure would be labeled "Santa Claus Home."

Just inside the cover (after a filler page) is this cheaply printed but quite cool color illustration of our gift-bearing fireplace visitor, as fat and human-looking as he gets.  If he's not looking too jolly in this shot, maybe it's because he's deep in thought, wondering, at he looks at the slender chimney shaft, why he didn't bring Plastic Man along for back-up. 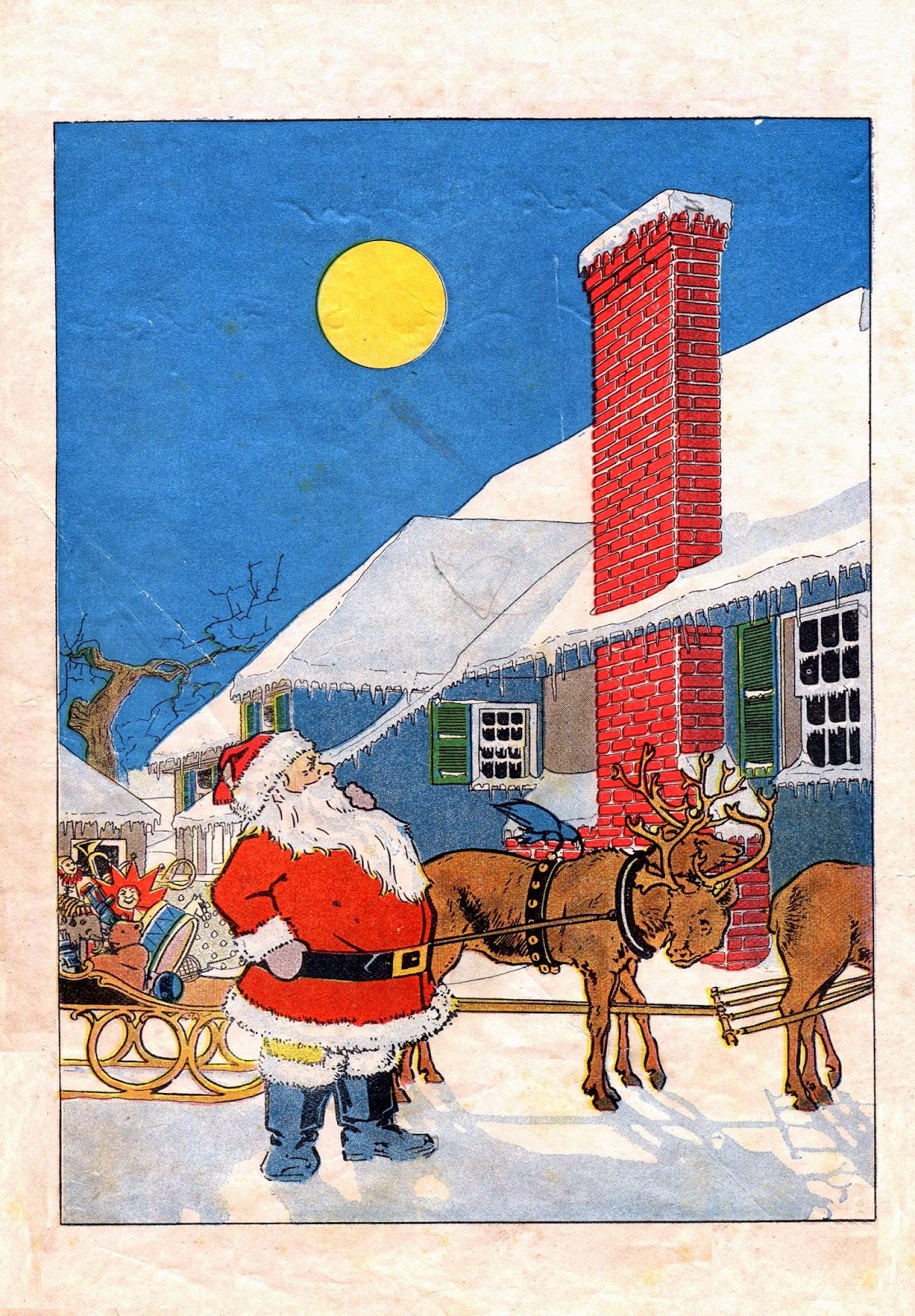 Same book--an illustration for the short narrative poem, "Santa Claus," which includes this gem:
Now, of toys he had no lack:
They were carried on his back
In a sack."

Santa leaves presents for everyone but Lazy Joe, whose stocking has a hole in it.  The hole being a violation of Santa/client policy, I guess. 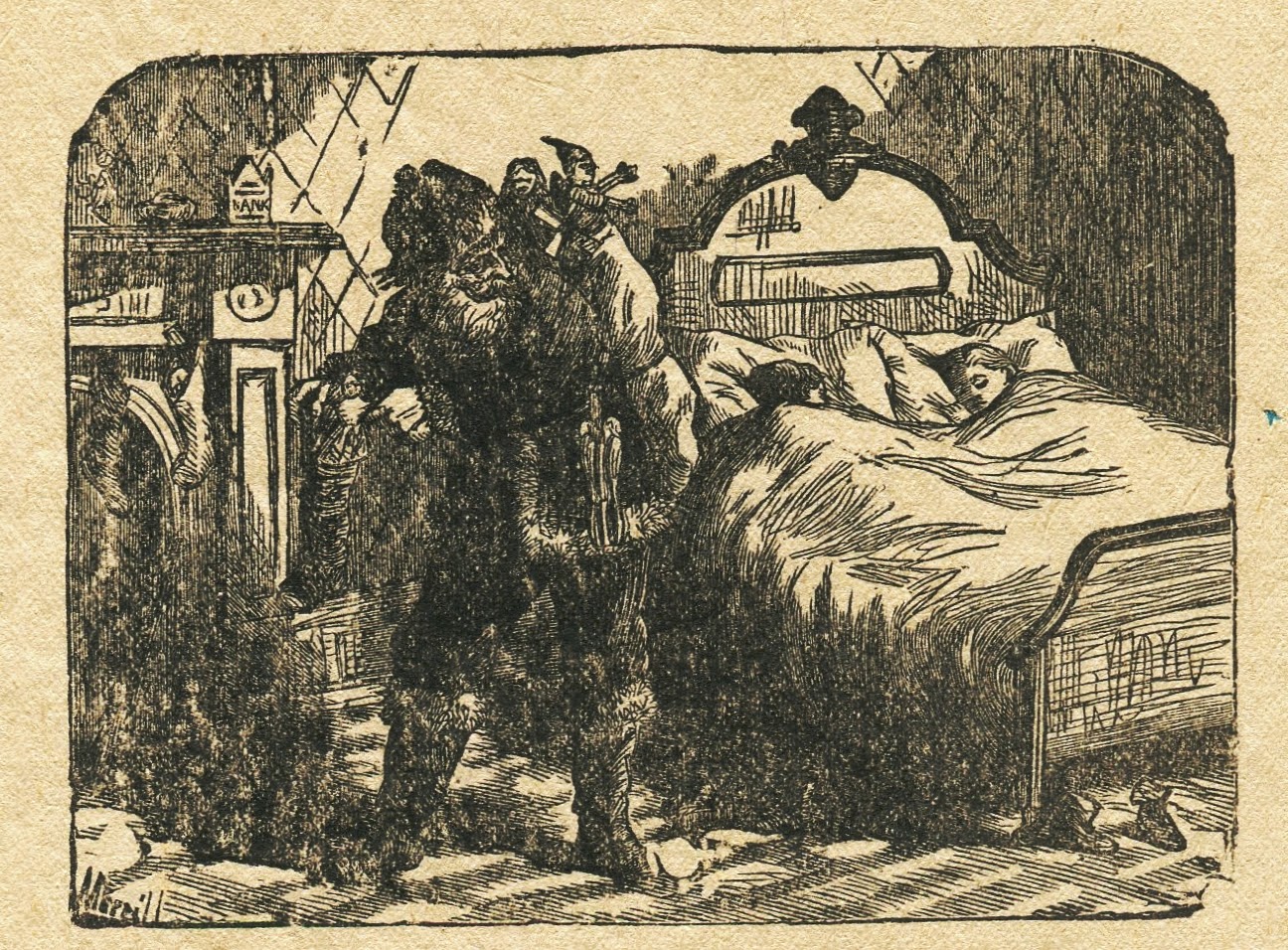 And here's Kris--er, Kriss--Kringle, looking nothing like the Austrian and German Christkind/Christkindl, a.k.a. Christ Child, the gift-bearer often portrayed as a blonde female angel in get-up similar to that of the Good Witch in the 1939 Wizard of Oz.  (Follow that?  Me, neither.)  Anyway, this is a new depiction on me.  Google Images is no help--for "Kriss Kringle," it just gives me images from Miracle on 34th Street.  Why Kriss looks like a hobo here, I have no idea.  But he's certainly fat and jolly, and that's one big white beard: 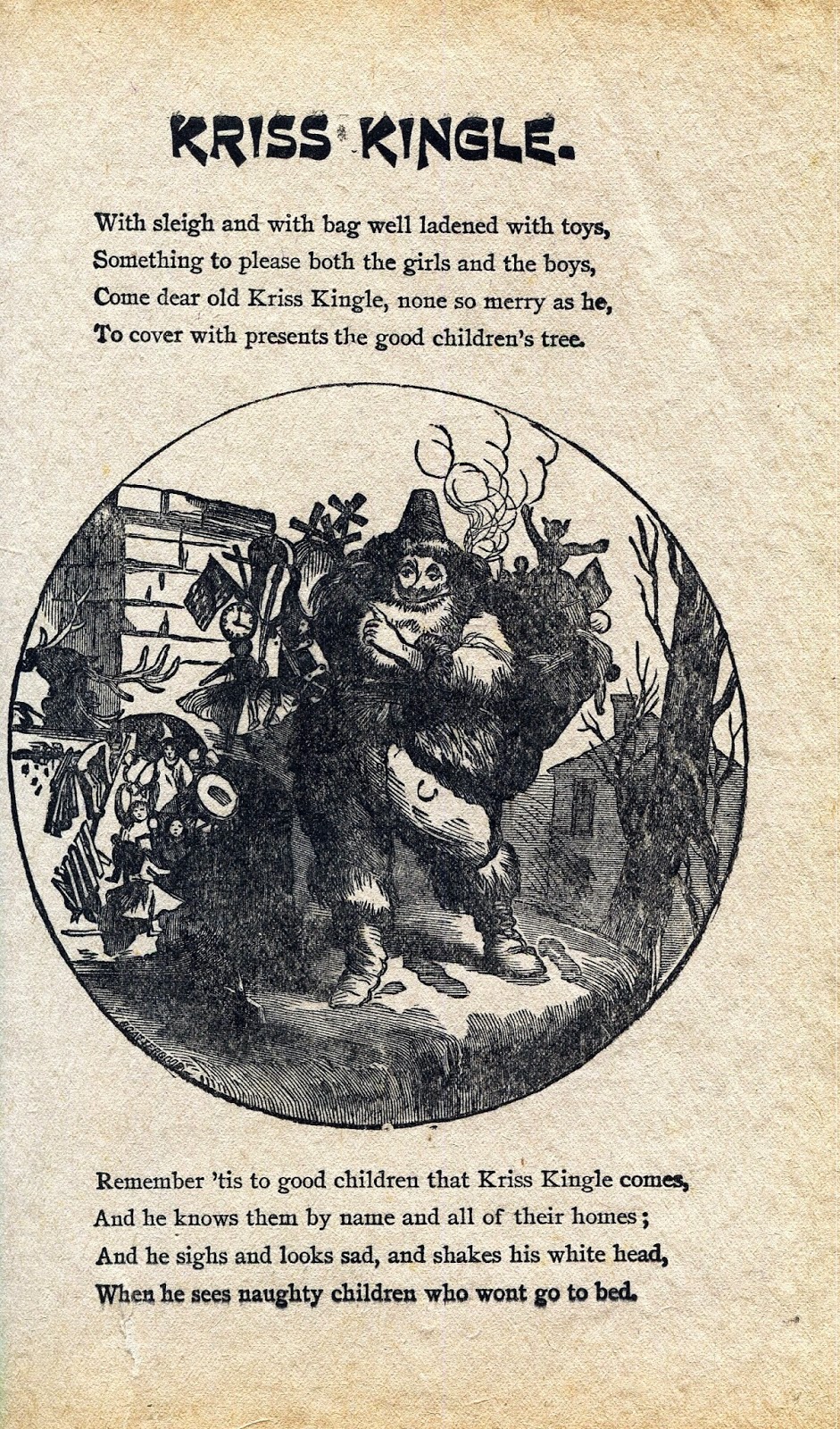 With the exception of Kriss, every one of this post's Santas passes the Coca-Cola test, imo.  (No, I'm not referring to the classic leave-a-nail-in-a-glass-of-Coca-Cola experiment.)

Hey Lee,
(I am rushing into the emergency area of a Hospital)
Help me, I need help.
(The nurse says)
Sir, what is wrong. What can I help you with?
(Me)
I have been hit on the head multiple times from falling pocketwatches. They are raining down from the sky.
(Nurse)
Doctor, we have another one for the padded room! Falling pocketwatches indeed. Come with me sir, I am Snow White, see my uniform. Doctor...

Hey Lee,
Honestly, I have never understood the following.
Santa has 8 reindeer pulling his sleigh. Not two, four, or even six. He has EIGHT. However, you see this all the time. Are they paying the artist per reindeer?
Sorry, it is the AD.

LOL! Yes, I was going to say something about the reindeer count. I don't image the illustrators for 19th century children's magazines and books were very well paid, so maybe they cut corners whenever possible. Maybe they were getting a flat fee, regardless of the no. of reindeer...

re: Reindeer. Was there a set number of reindeer prior to CC Moore's A Visit From Saint Nicholas? And did they have names? I've always thought he made all that up for his story, and it stuck until Johnny Marks added a ninth deer with a signal beacon for a nose. Everybody and their brother has tried to add more since then, but thankfully none have stuck too well.

In this day and age, Moore would be suing every artist who included eight reindeer in their artwork, claiming that was his copyright. ;)

But yeah, it bugs me a little too, when they don't show the right number. I liked the Silver Bell(s) LP cover because it had the right number, up to and including Rudolph!

A cool Wiki entry on the reindeer situation: https://en.wikipedia.org/wiki/Santa_Claus%27s_reindeer

And, if we accept what many holiday historians believe--that Santa was derived from Thor--the correct count would be two, since Thor had a pair of goats pulling his carriage through the sky.

And someone should devote a CD to all the failed Rudolph replacements/additions, maybe including "Buzzy the Christmas Bee." And the little character who went down chimneys too small for Santa--forgot what he was named. Also, "Randi the Handy Elf," whose name seems not suited for children.

That's a great article, thanks Lee!

And there are too many added reindeer for a CD. Throw in other random Christmas characters and you could do a boxed set of unaffordable size. :)

And I just listened to the song about the tiny Elf. Little Johnny Jinglebells, maybe? Santa finds him as an orphan and puts him to work. I may be mixing up my songs, but something like that.

Actually, it was a tiny elf named Silver Spurs. The record was tied in with a book by the same name. I put it up last year, I think.