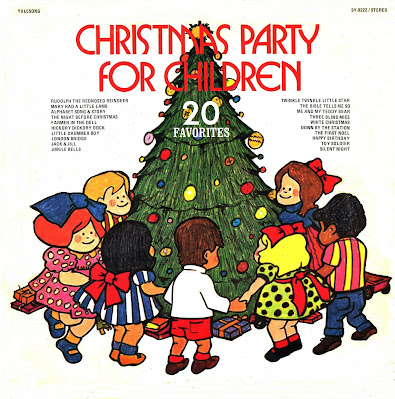 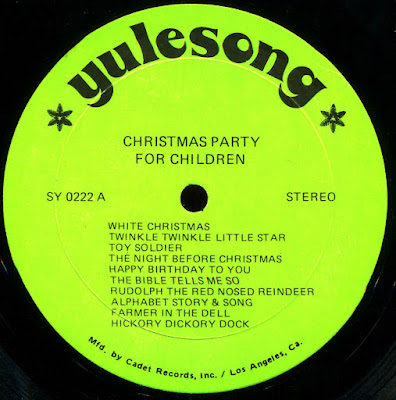 I love this LP, and I don't know why.  Maybe because it's so unrepentantly cheap--so aggressively tacky.  I mean, it almost doesn't rate as a Christmas LP, given that merely eight of the twenty selections (that would be 40 percent, I think) are holiday songs (!).  Can you beat that?  The rest are standard children's numbers, like Happy Birthday to You, Hickory Dickory Dock, London Bridge, and Mary Had a Little Lamb.  The folks who put this together set something of a record in the area of budget-label indifference.

I guess I love the sheer weirdness of the album, which I first featured back in 2017 (and whose download link perished long ago): We're talking about Toy Soldier serving as the title for Parade of the Wooden Soldiers, Me and Teddy Bear instead of Me and My Teddy Bear, and hilarious affronts like that.  I can imagine the dialogue in the company office: "Just toss something together in, oh, ten minutes."  "Does quality matter?"  "You're kidding, right?"  Anyway, this is a record-settingly tacky Xmas cheapie.  So, naturally, I restored it with loving care, getting a much better rip this time.  Plus, it's in a higher bitrate, which may help, or which may not.  I'm not sure.

Without spending a lot of time investigating things, I would say that this playlist is a mix of Pickwick and SPC stuff, including some ultra-familiar Johnny Kay/Johnny Kaye tracks which managed to show up on every other cheap Christmas comp back in the day.  Kay/Kaye, of course, was that Perry Como soundalike who recorded for Synthetic Plastics Company.  At least once (on SPC's Promenade label), Kay/Kaye covered a Como hit (Catch a Falling Star).  He was clearly the right choice.

Johnny is always nice to hear, and meanwhile the other tracks range from okay to "Dear God!"  It doesn't help that the transfers are the pits (would we expect anything more?), or that, despite the claims to stereo, many (maybe most) of the tracks are anything but.  For me, these are all recommendations, not warnings.  I mean, classic Christmas tackiness is, well... classic Christmas tackiness.  In the zip, you'll find the A and B label scans, plus the front cover.  I didn't bother to scan the back jacket, since it's identical to the front.  On the technical front, I had to clone out some masking tape and a printed owner's name ("Jeff Smith").  For all its faults, this does have kind of a cute cover.  Tacky-cute, perhaps.

Posted by Lee Hartsfeld at 9:00 AM

Exactly the sort of record we expect from you for Christmas! And that's a compliment! Thanks, Lee!

The cover says it's a "Christmas Party for Children," and presumably they would be happy to enjoy both Christmas tunes and such kiddie classics as "{The} Farmer in the Dell" during their revels.

"You're kidding, right?" "Dear God!" I'm thankful for your rips AND your writing, Lee. Merry, merry!

Yes, this may be the most MY(P)WHAE-appropriate Christmas LP of them all!

Very good point. Generic party music to go with the holiday material... I didn't think of that.

Merry, merry to you, too!

Sounds interesting Lee, downloaded and will check it out soon. Buster does bring up a valid point, too. Going for now, my fingers are getting more crossed up than normal LOL, love and praying for y'all!

That was my conclusion, too--no relationship to Chess. It's impossible to picture Chess putting out something like this--especially with all the SPC and Pickwick tracks. It's clearly some other "Cadet Records."

This is some of the same stuff that's been released by that perennial budget Christmas 'group' The Caroleers/Caroleer Singers/etc. Definitely have a bunch of these on some of those LPs.

Absolutely. SPC leftovers, plus (I think, at least) some Pickwick stuff. Since budget labels were in the habit of swapping tapes, it's often impossible to trace tracks to a specific label group, though I hear SPC all over this.