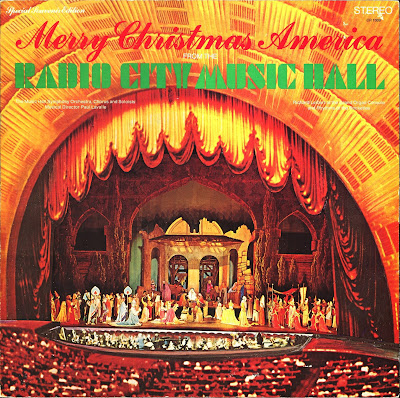 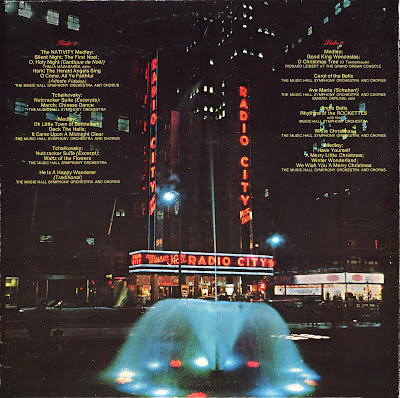 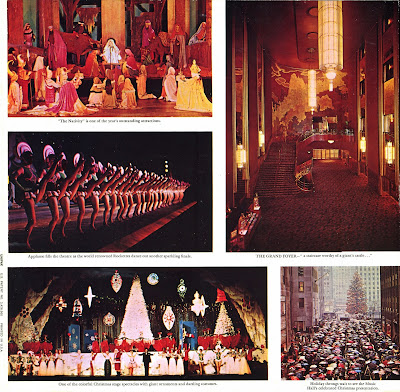 After so far ripping a number of budget Christmas classics--finally, a non-cheap release for the season, and pretty obviously a Radio City Music Hall giveaway.  Either that, or an issue only sold on site.  (Hm--the notes call this a preview.)  Anyway, I thought I'd start with this classy release.  And you know you've always wanted a track featuring the rhythms of the Rockettes, and now you've got one--I refer to Side 2, track 4 (Jingle Bells).

The listings are murder on this one, so I think I'll forgo naming the artists--I'll just stick to the titles. (The mp3 ID thingies have all the details.)  Things start out with a medley called The Nativity, and so we know we're hearing from an era that was less uptight about holiday/religion separation.  Superb musicianship throughout, of course--as we'd expect.  You just know that everything's going to be top-flight in that regard, and it is.

Have fun reading the lengthy notes--something I didn't do, since they're all mostly hype--and enjoy the cool pictures.  Again, this rip is coming on the heels (no Rockettes pun intended) of four cheapie rips (to be featured soon), so the contrast is kind of surreal.  And, speaking of the notes, The Happy Wanderer 1) is not a folk song, old world or otherwise, and 2) is not, to my knowledge, called He Is the Happy Wanderer, and 3) I forgot what else I was going to say.  So, Wikipedia says the text is from (looks like) the 19th century, while the tune was composed following WWII, and all I know is that I got really tired of it as a kid, and that would be either because it was played too often on TV or (more likely) because I had a grade school teacher who insisted on playing it on the school phonograph.  No, wait--now I remember.  It was in high school, in German class.  We probably sang along in German.  But the melody gets old pretty fast with repetition, imo--unlike, say, Jingle Bells.  And when did Happy Wanderer become a Christmas number?  I mean, even if the Radio City Music Hall elects to characterize Santa Claus as a wanderer (not quite the right word), isn't it kind of a stretch?  Besides, Santa knows where every chimney in the world is located--he doesn't need to wander.  ("Hey, why's that sleigh and eight reindeer going in circles?"  "Oh, Santa's wandering.  He might need a few extra nights this year.")

Organist Richard Leiber makes an appearance, predictably, and music director Paul Lavalle does the conducting throughout.  The coolest credit is the LP's producer: one Neely Plumb, one-time fake-hits orchestra leader on the budget labels Music Masters and Ace-Hi.  He came a long way in the biz.  Rockettes director is Emilia Sherman.

To the music hall:

Great stuff, Lee! Radio City has a long history of Christmas related releases, pretty much up to today.

Regarding The Happy Wanderer.

I agree that it is a rather annoying song and has nothing tangible to do with Christmas or the season.

My own personal gripe is why "My Favorite Things" became a Christmas song with only a solitary mention of snowflakes (and perhaps warm woolen mittens), while You Can Fly from Peter Pan is ignored entirely when it contains explicit references to "toys at Christmas, sleigh bells - snow."

I demand equal representation for these out of context Christmas songs!

Keep up the excellent work! Cheers!

Actually, I liked "The Happy Wanderer" when I was a kid, although there isn't much to the tune.

Lee and company,
Never heard of THW, 'til now, have to check it out, I think LOL, but I do agree, My Favorite Things is NOT a Christmas song, even if it does mention slay bells ! Fixin' to eat Lunch, so, 'til later, love and praying for y'all!

A good start to the festive season! Thanks for this and all you do at Christmas and the rest of the year.

Hey Lee,
If I was not so tired, I would be up adding my Rhythms with the Rockettes. Nothing like a tap-dancing song that wakes you up. Hey DJ, play me that tap-dancing song by the Rockets. You know, their version of Jingle Bells. Our party is in need of a pep-up. Even drinking coffee is not helping us out.
However, in Germany, Sundays are supposed to be quiet days. So no noise? So, no tap dancing for me, off-key as it would be.