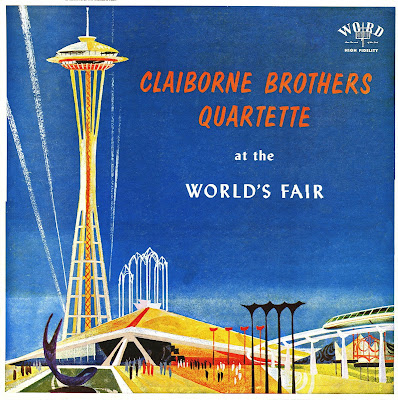 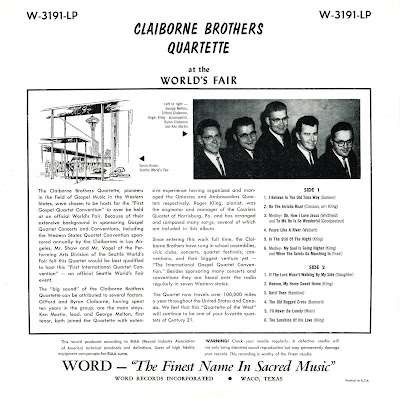 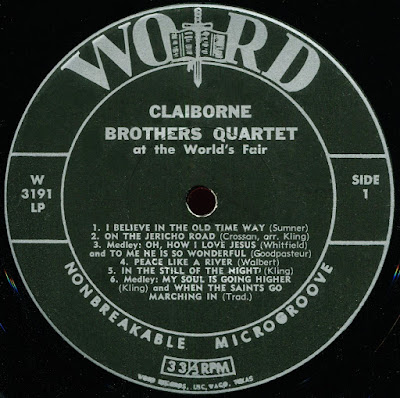 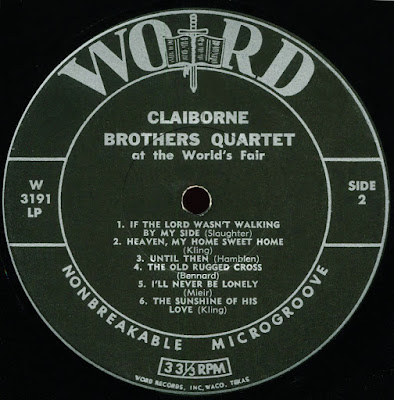 What about that cool cover?  So Sixties.  Sorry about the slight glitch in the stitch (hey, that rhymes!)--because LP covers are larger than my scanner face, I scan in four sections, then I use Scan-n-Stitch Deluxe to join them.  Since there's a slight depression between the frame and the glass (no reason for it--just is), it's just about impossible to keep the jackets perfectly level when scanning.  So we sometimes get stuff like this:

Oh, well.  Still a pretty awesome gospel cover--probably an official painting of the fair--and some very good quartet singing on the vinyl disc within.  When I Googled this LP, two 1962 newspaper (!) references came up, so I knew the year right away.  Furthermore, this is (or was) the 1962 Seattle World's Fair, aka the Century 21 Exposition.  Seven years in planning.

The five guys pictured on the back jacket include the four singers, two of whom--Gifford and Byron Claiborne--make up the "Brothers" portion of the quartette (not sure why they're using the old-fashioned spelling of "quartet").  Ken Martin is the lead, and George Melton is the first tenor, while Roger Kling is the accompanist and arranger.  I was happy to find the link to a Claiborne Brothers Quartette website, but not so happy to click on it and find a pharmacy page selling Wellbutrin SR and other drugs.  Anyway, some gospel mega-standards here: On the Jericho Road (the composer being Donald S. McCrossan, not "Crossan"), Until Then, The Old Rugged Cross, and Oh, How I Love Jesus.  The Roger Kling originals, including The Sunshine of His Love, are all unfamiliar to me, but they fit in just fine stylistically, and the playlist is smooth as butter, just like the expert harmonizing.  I'd have preferred a few more traditional numbers, but no one asked me.  At least there's the one 19th century number--1855's O How I Love Jesus, which uses an anonymous melody from that century.  I won't quibble over the O vs. Oh.  Though it is O How I Love Jesus.  Without a comma.  But I won't quibble.

To Me He Is So Wonderful, which is mixed in, descant-style, with O How I love Jesus in the first medley, was composed in 1955 by Ralph H. Goodpasteur (1923-1996), under the title It's So Wonderful.  I just now found the hymn in my 1975 Baptist Hymnal.  It's a black gospel number, and here's a YouTube video from the First Church of Deliverance in Chicago, where Goodpasteur served as music director.  You'll notice that the first line is actually, "To me, it's so wonderful."  Who changed it, and why, I do not know.

Update: I can see why It's So Wonderful was merged in a medley with O How I Love Jesus--the former's verse is very close to O How....


I Believe in the Old Time Way (J.D. Sumner)
On the Jericho Road (Donald S. McCrossan)
Medley: Oh, How I Love Jesus (Anon.), To Me He Is So Wonderful (Ralph H. Goodpasteur)
Peace Like a River (William Burton Walbert)
In the Still of the Night (Roger Kling)
Medley: My Soul Is Going Higher (Roger Kling), When the Saints Go Marching In (Trad.)
If the Lord Wasn't Walking By My Side (Henry Slaughter)
Heaven, My Home Sweet home (Roger Kling)
Until Then (Stuart Hamblen)
The Old Rugged Cross (George Bennard)
I'll Never Be Lonely (Audrey Mieir)
The Sunshine of His Love (Roger Kling)

Posted by Lee Hartsfeld at 7:17 AM

Curious that the cover reads "Quartette" but the record label is "Quartet". Maybe the folks at Word Records were experimenting that afternoon when the proofs had to go to the printer.

I didn't realize Word had been around so long until you posted some of their early efforts here, Lee. I didn't discover them until they had absorbed Myrrh Records and were the home of Russ Taff, Petra, etc. in the early 80s when I became a Christian. Looks like they've continued in the way of Contemporary artists now.

I am SO loving that space-age cover!

That's right--it is "quartet" on the label. I missed that. I guess I was too busy tracking down who wrote what. Word wasn't usually that careless, I don't think. And, yes, Word goes back a ways--to 1951, in fact. Check Wikipedia for its weird history. Its first release was a spoken-word disc (LP? 78?) called "The Game of Life," and WORD was/were the call letters of a fictional station. You have to read it....

Isn't it terrific? And to think I initially passed it up. It was at a huge Goodwill in the big city, and this time I grabbed it up. Not sure what I wasn't thinking the first time around.

Why don't we have World's Fairs anymore? I guess the world is too small. :(

Thanks for this classic album Lee! It's a little more starch than my normal diet, but some of that is good, from time to time. Are my ears playing tricks on me, or do I detect a doghouse bass on these cuts BTW? Love and prayin' for ya!

OMG, I actually *found* this record locally for $1! Not as nice a cover as yours, of course -- but then I bet yours wasn't as "nice" before your patented Fix-It Work. Keep it up!

Small world! I was lucky--mine only needed a little photo tweaking--mostly the group photo on the reverse. Did I mention in my write-up that I passed this up on a previous visit? I don't know what I (wasn't) thinking. Congrats on landing your own copy of this awesome jacket.