Hits A' Poppin (SPC 108)--Fine records needn't be expensive, though it can't hurt 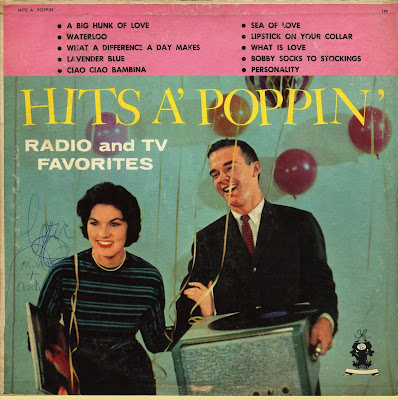 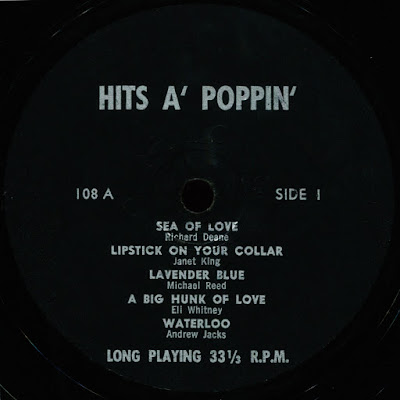 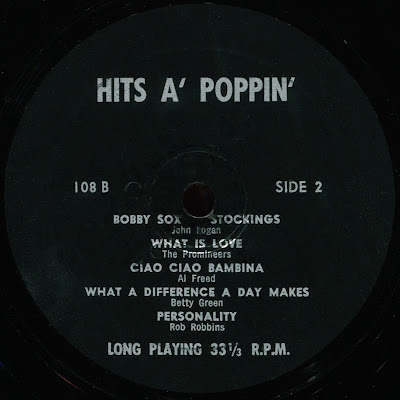 This hammered Synthetic Plastics Co. LP showed up last week in a local Goodwill, and I snapped it up without hesitation, despite the lousy condition, because for some unknown reason these things aren't showing up much in the thrifts anymore, and because the track list was new to me (fake-hit-wise).  Unlike the last Hits a Poppin' I featured, this one has the credits on the label--and an apostrophe after the a, so that's why I capitalized the letter this time.  Important detail, that.  The back cover (which I didn't bother to scan) has the famous SPC motto, "Fine records need not be expensive," except it's "needn't be" instead of "need not be."  Most of the SPC LPs I checked in my collection either have no motto at all or the "needn't be" version.  Nothing was standard with these things!  That would have required planning, quality control.  A short session devoted to working things out.  Out of the question.

Not even a label name for this one--I have at least three other SPCs with this generic black label.  These are more or less "LP--one each" labels.  I should check to see if the others also give ten instead of twelve selections.  I was able to substitute my own Promenade EP versions for a few of the extra-scratchy tracks, but of course I have no Promenade EP substitute for the most hammered track--Bobby Sox to Stockings--which has a deep gouge full through and partially into band 2.  Sweet.  I searched my Tops Records EPs, hoping I'd find a Tops version and that it would match this one.  Found one, and it looked hopeful--same title misspelling (Sox).  But totally different version.  Meanwhile, Personality, the track which immediately precedes it on the EP, IS the version on this LP, only longer (unedited).  One matches, the other doesn't.  I give up.

So, as a last-ditch thing, I stepped up the VS declicking settings for Bobby Sox (receiving a warning message about audio loss--which is not an issue on a track this hammered) and got amazingly good results.  I saved the track, an action that sends the "album" and its tracks to the default VS folder.  (I know--things don't literally migrate on PCs, but....)  So I brought the track into MAGIX from the default VS folder--and instead of the fixed audio, I got the "uncorrected" file.  I have no idea why--the VS settings are in order, and VS and MAGIX were getting along just fine on Windows 7.  So it must be another Windows 10 challenge.  I wrote VS for help.  Meanwhile, I burned the "corrected" VS track straight to CD-R, then I ripped it into my MAGIX "project" (this LP).  And then I don't remember anything after that.  Woke up in the woods, clothes torn, head dazed.

I seriously thought I'd have to omit Bobby Sox, but I ended up saving it.  Hooray!  What a lesser world this would have been, otherwise.  Fun stuff here, and there's the longer Personality and alternate Bobby Sox and Lipstick on Your Collar to make for another thirteen-track playlist.   And I didn't even have to look up Lipstick to know it's a Neil Sedaka song--pure Neil.  Except I just looked it up, and it's not Neil--it was written by Edna Lewis (w) and George Goehring (m).  D'oh!

Of the track credits, Eli Whitney and Al Freed stand out, as usual.  You don't suppose "Al Freed" is meant to suggest "Alan Freed" (who, as far as I know, didn't make records, save in the sense of helping make them popular)?  As you can see, I left the jacket half-fixed.  Just to give you an idea of what it really looks like.

UPDATE (7/5): I improved the original zip, removing some loud clicks and pops I'd missed before.  The link below now goes to this improved zip.

Posted by Lee Hartsfeld at 2:18 AM

Is that supposed to be a 'portable' record player on the front cover? :)

I’ve had many things happen to me while ripping records, but never ended up in the woods, clothes torn, head dazed.

Happens to me more often than I'll admit...