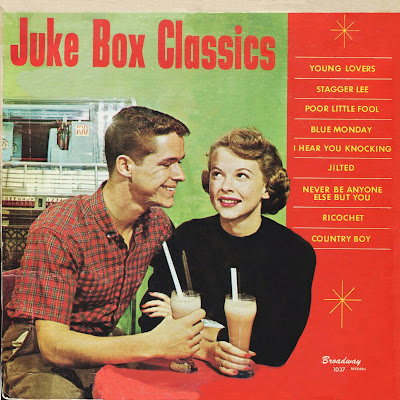 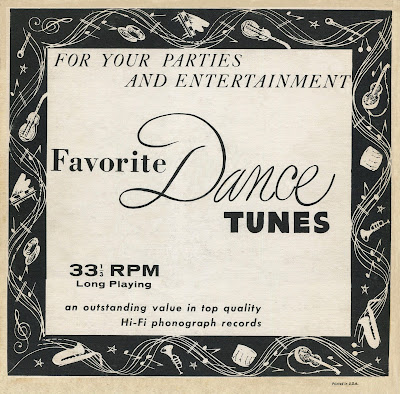 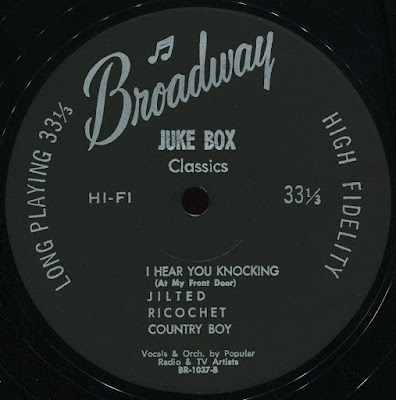 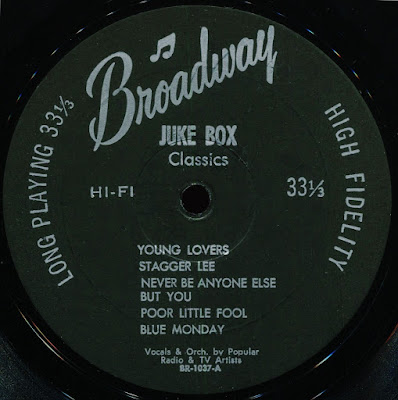 Unusual fake-hits collection here--we get everything from the 1953 Ricochet to the 1963 Young Lovers.  I think 1963, in fact, was the year is when this LP was released, though I'm not absolutely positive.  99 percent absolutely.  Of course, in real life there are no degrees of "absolutely," but why get technical, especially when the subject is so silly?  The era-hopping makes this an interesting collection, and some of the tracks are quite good--Stagger Lee (I've added two "bonus" versions), Blue Monday (plus two "bonus" versions, again), and the Fats Domino Country Boy, which, oddly enough, is the Prom label fake we heard recently.  It shouldn't be, but it is.  I've also included the Gilmar EP Country Boy version, which was likely a Broadway reissue, meaning it was the original Broadway version.  And, if you were able to follow that, congratulations!  I'm not sure there's any way to make that make sense.

In other words, Broadway originally issued its own version of Country Boy, one unique to its label, at which time Gilmar did its own issue of the same track, but, by the time of this LP (1963), Broadway decided for some reason to use the Prom (Synthetic Plastics Co.) version.  Instead of its own original version.  The, uh...  Er, I.... Um....  Yeah.

Why do I collect these things, exactly?  I forgot.

One cheap detail I really love on this LP is how the letting doesn't align on Side 2.  Note how "Juke Box Classics" was printed slightly a few degrees to the right of the track titles.  Teresa Brewer is covered again with Jilted, a 1954 hit I'd never heard of before.  Now I can no longer say that--at least, not honestly.  And I kind of like this fake better--Brewer's voice was never my favorite.  The 1955 I Hear You Knocking is the same counterfeit version that showed up on Allegro-Royale, which makes for another weird label group crossover.  Great fake, but what is it doing here?  Funny how my ears immediately picked up where I'd heard it before.  Handy talent, but a bit odd.  My inability to remember significant details is only matched by my ability to remember which fake version is which.  Meanwhile, my foster father, a mathematician, forgot practical things all the time but auto-remembered Broadway lyrics.

I did miracle photo work on the front jacket, removing the signs of the sloppy Scotch taping and the missing piece at the upper top right.  And there was an "R7" written in red felt tip just over the guy's head--it is no more.  It made for a weird effect, because the girl seemed to be looking up at it, as if to say, "Look, someone's written on this jacket."  And dig the huge straws in those soda shop glasses.

The final bonus is the Prom version of Poor Little Fool, credited to one Bob Mitchell.  Makes more sense that crediting it to two or more, I suppose.  The Don Raleigh Stagger Lee is the same as the Prom label version, only pitched up by about a quarter tone.  That, or Prom pitched it down.  You'd think tape recorder capstan size would have been standard in those days, but perhaps not.

The Loren Becker Blue Monday on Waldorf is outstanding--way better than I expected.  Waldorf gets an unfair rap--or, I should say, Enoch Light gets one.  The idea is that Waldorf never quite got the hang of covering rock and roll hits, but that was true only at first.  Many of its earliest attempts at rock and roll are odd big band-r&r hybrids, but before long Waldorf was putting out some of the best r&r fakes on the market.  And its pressings were way better than SPC's.

Nine tracks, plus six extras.  Soon to appear at Amazon....

I think I'll hold off and buy it on Amazon. It's got to be better if I pay for it, right?

Anyway, I thought the young woman was looking up in amazement at that fellow's unusually long neck.

I think it would be wonderful if Big Boy Burns' parents actually named him "Big Boy." I should have named one of my sons that. I wanted to name them Frank and Dino but that was vetoed.

Do you suppose that (except for Waldorf and perhaps some others) all these labels were simply purchasing rights to these knock-offs from a production company or two? The production company would pay the publishers and the artists.

That's my theory--that a couple of outfits were supplying the masters. Not at first, but come 1959 or so. Why Broadway didn't use its own "Country Boy" master is a mystery, but looking for answers is futile when it comes to these things.

Blue Monday starts lile Buddy lewis on Bell but is not the same maybe alt take?

Stagger Lee is like Al freed on Prom but mixed alt?

Charles Ellis also on A Coast To Coast Parade Of Hits 1267 https://www.discogs.com/Skeets-Mooney-Charles-Ellis-Stagger-Lee-Goodbye-Baby/release/8306543

I'll have to compare the Hit "Young Lovers"--I just got a copy, oddly enough, from a thrift. I can't believe Broadway would swipe from Hit, but you never know! Anything is possible with these things. I'll have to see if I have "Poor Little Fool" on Tops. And I agree about Al Freed--same guy, two different takes. I consider that highly possible.

Thanks for the input.

You guys are going to drive yourselves insane trying to find all the places these versions appeared or didn't appear. You may as well go count sand grains at the beach...

'Tis a strange obsession you're pursuing, Lee--like trying to collect fake Confederate dollar bills. But I'm going to follow you all the way into the darkest depths of the bargain basement. There is nothing like this happening anywhere that I know of in the folds of cyberspace. And some of the "simulacra" rival the originals. Thanks for this merry madness--just when I need it most.

You're welcome. I've never been completely sure why I find these so interesting, and it took a while to get hooked on them. I guess my interest started because there were so very many of these, and I knew they had to have served a genuine purpose, that--despite our modern response to the things--they were a legit part of the market. What seems odd or out of place in a later era only seems that way because we've forgotten the roots. For example, the elaborate dance band arrangements of the 1920s are an offshoot of the light orchestral music so popular in the days leading up to Paul Whiteman. Later on, people listen back and wonder, "Why the complicated charts?" And it's because listeners of the day were used to such sounds. I once asked someone who had grown up during the Kostelanetz era what label people used for K.'s mood music. "We just thought of it as music," he said. In other words, just part of the mix. It's the everyday details that become odd over time.

I remember buying a Tops 45 (at lest, I think that was the budget label) that was a rock-and-roll version of "Caravan." It was so extraordinarily exotic that it became my favorite version of all time for a time. How I first heard it stymies me. Was it played on the radio? Certainly, it wasn't on a juke box. Or, to do a Colbert double-take, was it? Some bloggers are posting weird records by Sam-the-Man-Taylor and Bobby-Hackett wannabes. I always thought Lenny Dee was his own best wannabe. But recently I downloaded an album of his that was of interest. So now I must assume he had his wannabes. In a mediocrity-flooded time like this, time sanctifies whatever it can to remind us of just how much has been lost.