The Looper Trio--Singing on the Way 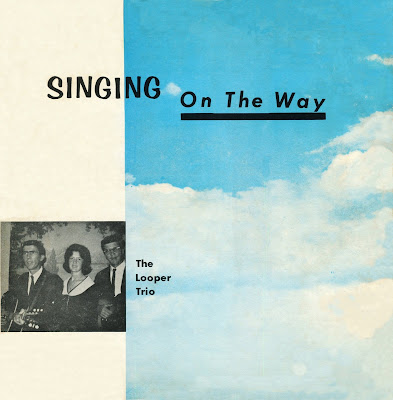 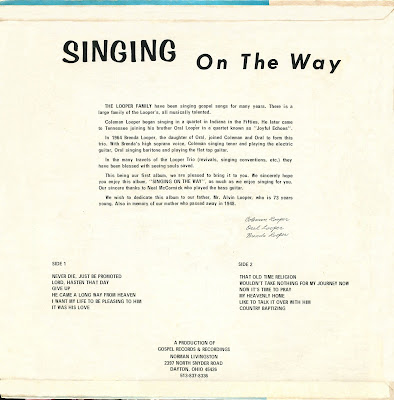 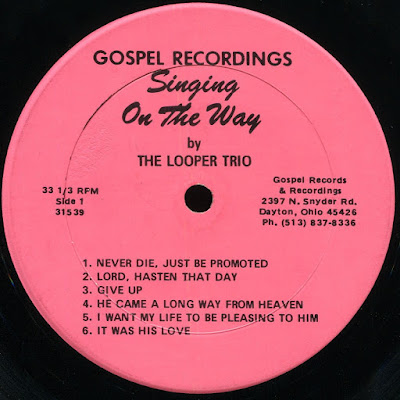 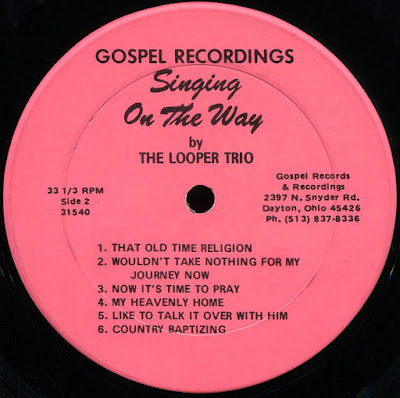 A very quick essay for this last-minute post.  From a number of cyber-sources, I learned that the Looper Trio hails (or hailed) from Tennessee.  And we have this info, from today's back jacket: "Coleman Looper {group leader} began singing in a quartet in Indiana in the Fifties.  He later came to Tennessee joining his brother Oral in a quartet known as 'joyful Echoes.' ... In 1964 Brenda Looper, the daughter of Oral, joined Coleman and Oral to form this trio.  With Brenda's high soprano voice, Coleman singing tenor and playing the electric guitar, Oral singing baritone and playing the flat top guitar."  A little further down, we read, "Our sincere thanks to Neal McCormick who played the bass guitar."  Neal was probably performing on a guest basis for this LP.

That's an exact quote, including the sentence fragment.  Not being a grammar Nazi, but just in case you found yourself wondering where it was going.  The last two sentences would have worked nicely with a comma between them, so maybe it was a typo at Gospel Records and Recordings, the Dayton, Ohio outfit listed on the jacket and label.  No actual label name, but you can't have everything.  Discogs says this was pressed by Rite Record Productions, but it doesn't have a year.  This is monaural, so I'm thinking 1965-ish.

Outstanding music here, and I put it up once before, though the original page is one of the many I deleted a few years back.  I would categorize these folks as bluegrass gospel, but people in cyberspace seem to classify them as southern gospel--no big deal.  I sometimes use the label "country gospel" for music that straddles the line between bluegrass and southern gospel, but let's just describe the Loopers as a more Appalachian-sounding Chuck Wagon Gang.  Or I will. You don't have to.  Just download and enjoy.  Can't find composer credit for My Heavenly Home, which is also known as That Heavenly Home--no time to search my songbooks, and on line isn't much help, but I'll see if I can crack the mystery.  I did find the folks behind the modern standard, Wouldn't Take Nothing for My Journey Now, which is actually I Wouldn't Take Nothing for My Journey Now.  Those folks are Jimmie Davis and Charles F. Goodman.  From 1964, looks like.  When I first heard this song c. 1990, I didn't quite get the vernacular--I thought it was about not taking anything to Heaven with you--no books, photos, etc.  Of course, "take" means "trade," as in "I wouldn't trade anything for...."  Especially anything offered by the Devil.  It had me wondering at first.

In other news, That Old Time Religion, the seventh track in our playlist,  is not the famous "Give me that..." gospel number.  Just so you know.  And, yes, that third title is Give Up.  What's it doing on an LP of inspirational numbers?  Ah, just listen to the lyrics and see.  Clever irony, whether intentional or not.  Give it up for the author, the late Howard Goodman of the Happy Goodman Family, another terrific singing group.

Update:  Thanks to Bob, who identified this as a Rite Record (Cincinnati OH) pressing from 1973.  This page gives years for Rite matrix numbers.  I had figured this might be a Rite pressing, but there's no "Rite" on the dead wax, and no mention of Rite Records on the back jacket.  In addition, there are two tiny words in the dead wax, both of them next to illegible.  The first could be "Nashville" (????).  The group is from TN.  Could it have made these tracks there?  The recordings are mono, and I have two earlier Looper LPs, both in stereo.  Anyway....

Never Die, Just Be Promoted
Lord, Hasten That Day
Give Up (Howard Goodman)
He Came a Long Way from Heaven
I Want My Life to Be Pleasing to Him
It Was His Love
That Old Time Religion
Wouldn't Take Nothing for My Journey Now (Davis-Goodman)
Now It's Time to Pray
My Heavenly Home
Like to Talk It Over with Him
Country Baptizing

"This being our first album, we are pleased to bring it to you"
Intriguing, because (unless this is a re-issue), there were at least five or six albums issues before that?

Thanks for the year. I see now that all I had to was go to the Rite Records matrix page to find it! D'oh!

The "first album" claim puzzles the heck out of me, too. I have two previous Looper LPs, both stereo. The group shot looks early, and the tracks are mono, so we have those two clues. A reissue would be my best guess, too--that, or this is early material that sat around for years before being released. Except you'd think the notes would specify that. Beats me.

Lee,
Thanks for reposting, got it the first time, good to see it back around! I'd say a reissue as well, given the quality and youthfulness of the membership/musicianship. Who was the Bass player BTW? Oh and thanks for clearing up who played the Electric and Flat-top, wondered about that for years! It Was His Love and That Old Time Religion, were done earlier by The Sunshine Girls of Bristol, TN (maybe VA), on their album entitled (I believe) Introducing The Sunshine Girls, recorded at Sun in Memphis with liner notes by (I believe) Les Beasly of The Florida Boys, who discovered them at a TV broadcast taping some time before, but all that's for another post LOL! Oh and the Charles F. Goodman of Journey, is the same as Rusty, of The Happy Goodman Family (AKA The Happy Goodmans) and The Plainsmen Quartet. Sorry for rambling, great post! 'Til later, love and prayin' for ya!

BTW Lee,
I believe you've posted four other albums from this particular Looper conglomeration from your collection previously. They are Life Beyond Death, The Gospel In Song, Holy Hills Of Home and I don't Want To Get Adjusted. You've also had a guest post of I Wanta See Jesus. From the later Looper group (The Loopers) you've posted Touring That City (from your collection via tape) and It's Worth It All (as another guest post from the same feller). Anywho, love and praying for ya!

Thanks, Josh. I was going to search through my gospel LPs to see what I have by the Loopers--you've saved me the trouble!

And bass guitar is Neal McCormick--looks like he performed on a guest basis. I forgot to add him. Oops!

No problem Lee, glad to help anytime. Been unzipping some of your stuff for like nine years now, LOL! Keep it up, love and prayin' for ya!

Thank you for this! Any idea at all who wrote "He Saved My Soul"?

I did some Googling and discovered the song is also known as "I Cried My Way to Victory." It's the third track on this YouTube post, by the Earls and Whitehead Gospel Singers: https://www.youtube.com/watch?v=tJnRDxFKlbI

I can find no composer info on it....

Lee,
Kinda interesting that someone mentions that song, because it isn't on the album in the post LOL! The first place I ever heard it (but I know it's not the original, at least, I don't believe it is), was an album of The Triumphants of High Point, NC, which I'm not sure I have anymore, but here's the song from Youtube.

The Inspirations, Billy Kelly, The King's Travelers, The Earls And Whitehead Gospel Singers (as you've already pointed out) and probably a bunch more, recorded it in the mid-late '60s, into the '70s, but I too, have no idea who wrote it. I have the album of The Inspirations that it's on, maybe it'll say who wrote it. I can't remember which one it was, maybe Cool Water. I know it was one of their earlier ones from around that time, back when they were probably still in high school. Enough of my rambling, sorry I couldn't help much. Keep up the great work, love and prayin' for ya!