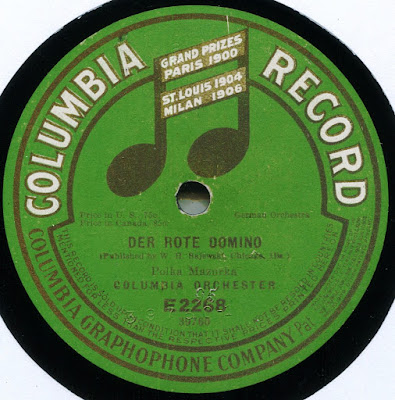 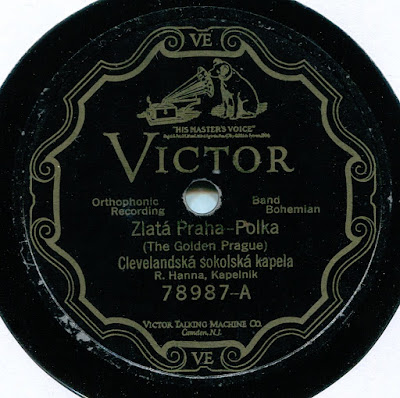 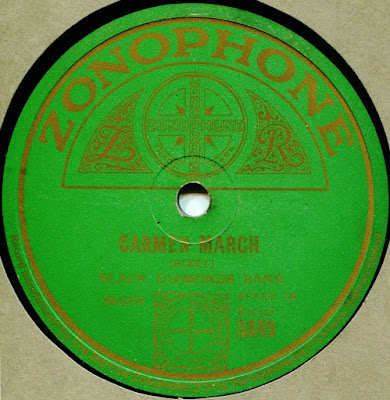 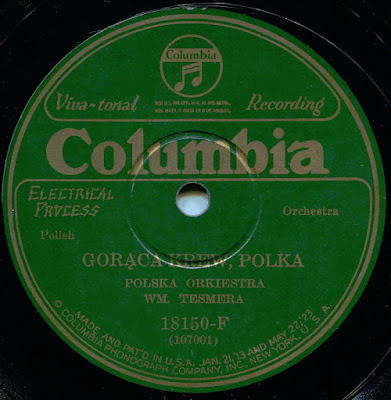 Well, to be fair, this isn't an all-polka playlist--we have some 1919 and 1925 dance music, a terrific Spanish number (led by Amapola composer Joseph Lacalle), Bizet's Carmen March, Dixieland by the Original Memphis Five, and 1917 death metal.  No--just kidding about Carmen March.

Anyway, I started from scratch (no pun intended), using 78s from my collection and imposing the correct response curves and the necessary noise reduction, and it was just another day at the farm.  Well, actually, more like three or four evenings.

1915's Der Rote Domino (the red domino?) was released in two different editions--one for Polish-American customers and the other for German-Americans.  Same band, same music.  The flip is a terrific German march I can find nothing about online (and my copy has a manufacturing error--the same label on both sides!).  Anyway, the first two bars of Der Rote Domino tell us that we're listening to that famous number commonly known as The Clarinet Polka.  If a 1915 polka 78 surprises you, keep in mind that polka melodies have been traced to the late 1700s--George Washington and Thomas Jefferson may have danced to them.  My own love of polka music started in high school--my best friend's parents had a cool collection of polka music.  Rick and I would get drunk and put on Who Stole the Keeshka, and I grew to love the music--still do (obviously).  And I have to watch myself when it comes to the word "Polack," since technically it's an ethnic slur.  Except, that's what my friend's family called themselves!  I regard myself as an honorary Polack, and I mean that with much affection and respect.  But I still have to be careful.  "Polack" jokes are a rite of reversal, really, since Poles are smart people, and everyone knows it.  (Chopin, anyone?)  And so the jokes reverse the reality.

To me, vintage polkas are some of the coolest and interesting recordings around, which only goes to show how deeply runs my lack of concern for "correct" tastes.  People can make fun of polkas all they like, but it hasn't stopped the music from passing the two-century mark.  Now, I didn't even try to find out what "Goraca" means (Goraca Krew), and... wow, it means "hot."  Anyway, the band on this 1926 Columbia side sounds a tad unusual, what with the abundance of treble range in the band makeup, and I don't know if that extremely high-pitched sound is simply a xylophone tuned way, way, up, or what.  Cool effect, and the low-volume beginning raises the intriguing possibility that engineers of the early electrical-recording period had audio faders (I'm picturing a primitive box-with-knobs type of device), meaning that everything wasn't strictly a matter of microphone placement.  Given that radio broadcasting preceded microphone recordings and that there must have at least been manual limiters, vintage mixing boards are a very probable thing.

Anyway, we're hearing Czech, Polish, and German polkas, and the ragtime-before-ragtime Patrol Comique, from 1888, even has a polka sound to it--a cakewalk polka!  I don't know why folks like Wikipedia hang on to outdated narratives when it comes to pop music forms.  I mean, we're always hearing that ragtime started in the mid-1890s, despite the fact that it's widely known to have shown up earlier than that.  What's the problem with revising a claim once it's been proven false?  Is there some rule against that?  "No, you were born in 1960.  Period."  "My birth certificate says 1957."  "No, it was 1960.  It is written in our holy book--the Tumbling Rock History of Pop Music."

Oh, and two circus marches, both blog repeats but in better audio than ever.  Our sole Dixieland offering is the oddly titled Snakes Hips, and this recording was the first version I heard way back when, and so it has stuck in my mind as the "correct" version.  Why do our brains do that?

The weird descending-pitch whistling in the 1927 polka The Wedding in the House of Witos (I'm glad the Victor label translated it) has had me confused ever since I first thrifted the 78 back in 1996 or so, but I finally figured out that it's meant to be a celebration/celebratory sound effect--possibly, the noise made before a firework pops.  And it should go without mentioning that novelty polkas were a huge influence on the greatest musical parodist of all time--Spike Jones.  Polka and blues have a lot in common, thematically, to the extent that both devote half of their songs to the subject of getting drunk.  I have an Arhoolie collection which features a number that's virtually a getting-drunk saga--every possible aspect of getting drunk, all condensed into one tune.  A mini-epic. In vernacular music forms, getting drunk is a metaphor for... getting wasted, basically.

Get Lucky is a "symphonic jazz"-style number by the famous Roy Bargy, whom we associate with Paul Whiteman and George Gershwin, and the flip is the masterful novelty, Prince of Wails by the king of then-unusual-to-pop chord progressions, Elmer Schoebel, once a member of the New Orleans Rhythm Kings, or NORK.  Get Lucky, by the way, covers all the bases: it's a "Chicago Stomp or Shimmy--Fox Trot."  (Whew.)

Goraca Krew--Hot crew.  That's like something out of the Disco era.  And I'm sure there have been Disco polka LPs, which is a scary thought.

Posted by Lee Hartsfeld at 5:54 PM

Thanks Lee! This great stuff. Nice to see you taking a dive into your collection - Were any of these the records you shipped from Scotland? Also, interesting observation on the early sound mixing. Never a bad time for polka!
-Steve in PA

I figure there had to be such tech. The proof is in a 1926 recording by the Associate Glee Clubs of America (I think that was their title) which featured hundreds of singers and was sent via telephone wire to either a radio station or recording studio. Anyway, there's at least one volume peak in which the volume is suddenly cut down, and so I figure a fader was used. There's probably info on the internet about early mixing boards and such--I need to look that up. And none of these are from Scotland--at one point, I downsized my 78 collection considerably, and so most of my HMV Paul Whitemans and such are gone. I don't remember why, but years back I decided to part ways with shellac. But it must be in my blood, because my collection is larger now than it ever was. And the early polkas are amazing--especially the "village" (folk) stuff, some of which sounds beautifully odd. There was an area of East Poland which where the polkas used strange Bartok-style modes--think the major scale with a tritone. The unpolished stuff is great, as are the march-style polkas, and of course some early polka recordings are little removed in style from what we'd hear today. At one time, I associated polkas with Poland, but it seems to have been the Czech/Slovenian/German types that first made a splash in American pop music. Thanks for the nice words!

Oops--I meant the Associated Glee Clubs of America. I almost added their version of "Viking Song" to the list, but didn't. That's the once-standard art/glee club song which is likely the source for the Monty Python "Spam, Spam, Spam, Spam" routine.

@Erine, re polkas; Beer, I'm told lots of beer helps my friend! If you don't imbibe, there's a wide variety of sausages...

Just think of these as historical polkas. And just try to imagine our founding fathers possibly dancing to such music. Er, then again...

No, I fully understand not being able to get into polkas. I had early indoctrination, myself--my great grandmother had a tall, old-fashioned radio (the ones shaped like jukeboxes), and there was a polka show we danced to--I was three or four. And, in high school, I'd get drunk to "Who Stole the Keeshka," so rev.b is right--beer helps!

reb.b--In this case, it would have to be to be carefully preserved Polish sausages! 1915-1927 style!

This was great fun, Lee; thanks for sharing. Polkas in any form are a pleasure. Which is a good thing since there were SO damn many of them recorded!