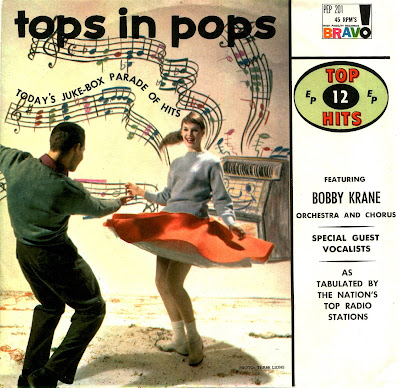 "Get me the hotline to the nation's top radio stations.  Hello?  Hi, this is the Bravo! label..."--Bobby Krane, 1959.  "Special guest vocalists" is a sneaky sort of phrase for "moonlighting studio singers," but "Singers who don't want to get busted by the union" doesn't have quite the same ring.  And, of course, with the budget operations, everything was special, somehow, and because "special" sounds better than "cheap" or "cut-rate" or "We fooled you, nyah nyah!"

Now, I don't know for a fact that any of these vocalists were breaking union rules, but that's my best guess.  It's also possible that these singers had ambitions in the industry and didn't want to be associated with the six-tracks-on-one-side market.  Not good for a beginner's resume.

What I do know is that these are pretty decent covers.  And I'm also nearly, mostly certain that I've already featured a number of them in their Top Hit Tunes (Waldrof/Ampar) incarnations, with four or five almost definitely on their second go-round.  For instance, I'm sure that this anonymous version of Apache is the same version credited to "The City Boys" on THT.  And you have to give credit to whoever came up with "The City Boys," though I'm not sure why.  I mean, "The City Boys" sounds like a pure let's-wrap-up-this meeting-so-I-can-get-home-and-haul-the-trash-to-the-curb bit of last-minute desperation.  "Hell, just call them the City Boys.  That's it.  Goodnight."  And today's Think Twice is probably the version credited on THT to "Brother Ray"--who, whatever his real name was, is no Brook Benton.  And if Think Twice has you thinking about a famous Bob Dylan song, it's all right.  (Chortle, guffaw.)

Meanwhile, here's the "card" that came inside the sleeve shown above--the hole in the "title strip" is a jobber-rack hole, though the "Send 3 different strips with 15¢ and get one 'BONUS' EP (6 songs) FREE!" tells us that these cheaply packaged offerings were sold both by mail and in-store.  And, to be fair, that cover photo is kind of cool, which may explain why Pickwick kept using it.  And I'm repeating myself, I know.  But that's inevitable, since this market was all about getting the maximum bang for the buck with duplicate sales.  The maximum bang for the sellers, not the buyers, of course.

And I should mention Brian McFadden's wonderful Rock Rarities for a Song, a book about the budget labels (well, more specifically, about the rare, highly collectible tracks that happened to turn up on the budgets) which answers a lot of the questions I've had for some time.  It's written by a record-biz insider, which makes sense, because who else would have access to such data?  First off, it seems it was common practice for the different label groups to swap fake hits--to literally trade tapes.  ("I'll give you five of our fakes for five of yours.")  I already knew that much label-hopping was occurring, but somehow I figured it was a more organized thing.  Nope.  It was done casually, like everything else with the cheapies.  So, the big mystery regarding Waldorf/Ampar and Pickwick connection is, in fact, no mystery at all--it was just the standard get-less-for-your-money marketing strategy.  We can forgive the budgets, to some extent, for being sneaky, since obviously these operations had to keep moving product if they didn't want to go bankrupt.  Unlike the legit labels, there was no room for error.

As a bonus track, I offer the complete, uncut-for-EP version of the abbreviated Top Hit Tunes Tallahassee Lassie track that I featured in this post, where it was credited to "Ted Colt," whose real name was Ted Malt Liquor.  At the time, I wrote, "Oddly enough, I can find no LP appearance of the Waldorf Tallahassee Lassie, and I'd love to hear the full cut. It may even have had a guitar solo."  And, all this time, it was sitting, minding its own business, on a Bravo Bobby Krane Tops in Pops LP.  And, indeed, there's a guitar solo.  Fun fake, though it epically lacks the energy of the original.

On the label scans, you can observe how Pickwick tried to generate excitement by making the "o" in "Bravo" look like an exclamation mark.  Problem is, frumpy white font on black, ultra-generic labels hardly spells "excitement."  Then again, any visual glitz was saved for the "envelopes," not the cheaply pressed EPs.  And as much as I enjoy insulting these things, you know I love them to death.  Enjoy! 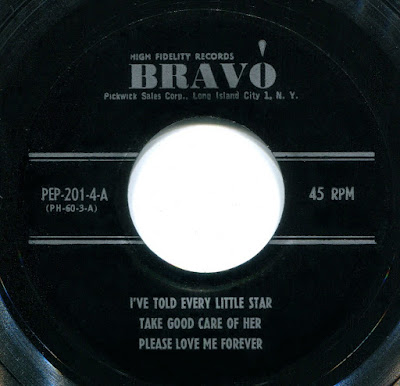 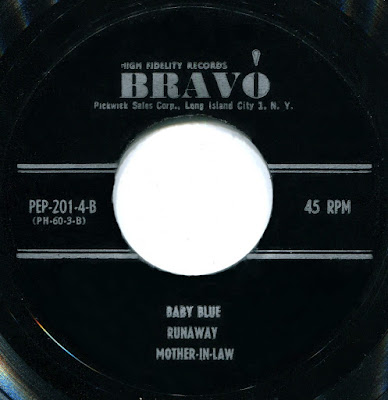 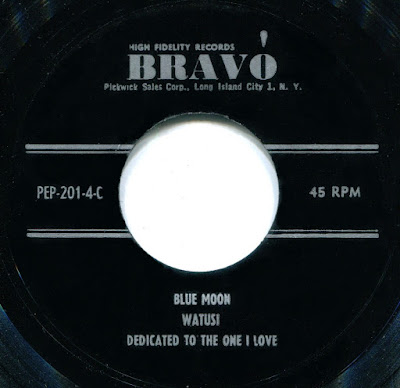 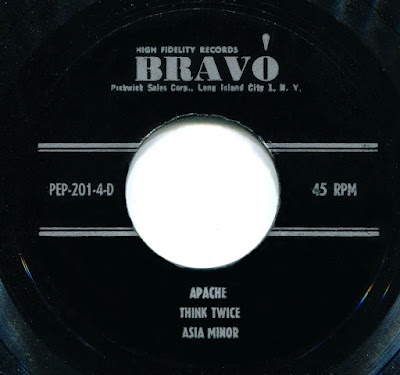 Posted by Lee Hartsfeld at 7:25 AM

Fascinating stuff, as usual. I'll have to check that book out.

I am picturing a bunch of Don Draper types sitting around drinking cocktails from heavy square glasses, trading little piles of reel-to-reel tape. :)

Your dedication to this stuff is a continuing source of amazement.

That cover manages to be dorky and sexy at the same time.

Thanks for the tip about the book, but I was expecting it to retail for 79 cents.

Ha! Actually, I'm picturing Pabst Blue Ribbon cans. I'd love to see some studio shots from those days. I'll bet the work environments were cluttered like crazy. ("Now, where did I put that fake?")

Or 99 cents, at least! Good one. And I always like the opportunity to dig deeply into things that most people would never dream of micro-focusing on. I have no idea why...

Nice collection Lee... (hmmm - - seems I've heard SOME (all?) of these recordings before... Who could forget the slightly off-key 'Please Love Me Forever'?) Thanks for another fun album Lee. Burt

Sure. And, yeah, most or all of these probably previously showed up in a Top Hit Tunes post. I thought there was a big, major mystery when it came to Pickwick swapping tracks with Waldorf/Ampar, but thanks to McFadden's book, we now know that such swapping was standard procedure. Why produce your own fakes when you can simply trade tapes?