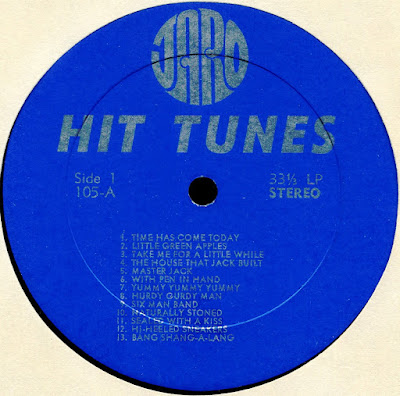 Answer: Yes, it's possible not to do justice to The 1910 Fruitgum Company.  Who would have guessed?  But not a bad group of fakes, overall, the worst aspect being the sound, which I improved considerably, I think.  Naturally, I would think so.  This coverless LP came stuffed into a thrift copy of 25 Hit Tunes, which was distributed by Hit Tunes, Inc., a subsidiary of R.T.V. Sales, Inc., and produced by (of all people) Starday Recording & Publishing Co. in conjunction with Keel Mfg. Corp.  Did you get all that?  There'll be a quiz.

That particular LP contains Tequila by The Champs, Sheila by Tommy Roe, I Wonder Why by Dion and the Belmonts, and I Got Rhythm by the Carlocks, and Groovin' by the Spads.  Yup, I remember those two Top 40 hits by... wait a minute.  The Carlocks and the Spads?  Meanwhile, the track listing on my copy doesn't exactly match the one at Discogs, and one of the companies--R.T.V. Sales, Inc., maybe?--put title-revision stickers on the back cover.  But we won't be hearing that LP.

Rather, we will be hearing the simply titled Hit Tunes, which also has 25 hits, but none of them credited to anyone (in the purest fake-hit fashion), and with matrix numbers rather than a regular catalog number, and a label which appears to be called Jaro.  And the Jaro labels that come up on Discogs--none of them seem to be this one.  I can't believe this came as a mail-order extra with the Starday/R.T.V. Sales LP, but then who knows?  "And you get a totally confusing bonus group of fakes with every order!"

I remember maybe 2/3 of these from their first time on the airwaves, while other titles--all hits--aren't familiar at all.  These include Elenore, Too Weak to Fight (orig. Clarence Carter, 1968), Cloud Nine, Time Has Come Today (Chambers Brothers, re-released 1967), and Master Jack (Four Jacks and a Jill, 1968).  Now, Time Has Come Today seems like the sort of song I'd remember, so I guess I just forgot Time with time.  Maybe I found it too annoying to remember.  A good number of songs that I would never have rushed out to buy, along with some very nice memories mixed into the mix.  And I guess I recall The 1910 Fruitgum Company with affection.  My sister had their singles, and certainly worse rock/pop has been made.  Maybe.  As noted earlier, the two 1910 covers (Yummy Yummy Yummy and Chewy Chewy) are a bit amateurishly done, but they're not the kind of hits we'd expect to receive loving covers ("All right, Take 20!").  And, for anyone who wasn't, um, lucky enough to hear these two numbers back in the day (maybe you weren't born yet), they were not followed by Tummy Tummy Tummy Ache or Belching Belching, though those would probably have hit the charts, too.  I just remember that The 1910 Fruitgum Company was one of several groups made up of studio pros, as part of the genre labeled "bubblegum."  I could quickly look up "bubblegum" (and the responsible producers), but I don't feel motivated.  I just remember folks complaining about the stuff being too immature for rock, but then rock, by that point, was officially anti-anyone-over-25, so this pretty much put rock in a hard place.  I mean, on what logical grounds can music for the young be dissed for its youth appeal?  Or whatever I just typed?

Anyone with any info on the Jaro label, please comment.  In fact, there's been a near-radio silence around here, even though my files have been moving.  Feel free to comment, so at least I know that people are out there.  I mean, maybe my stuff is being downloaded by spies from one of Pluto's moons.  (You never know.)  My thanks to the four guys who have commented, and it's not like I'm counting or anything.  Even "This album sucks" would be fine (but only so long as that's your actual opinion).  I never take such feedback personally--unless you call whimpering and beating on a pillow in frustration and moaning "Why?  Why??" an example of taking something personally.  Cultures vary in that regard.  Somewhere, there's a society in which that constitutes a normal reaction.

So, competent studio musicians, despite some bad lead singing at times (Both Sides Now, for instance), but I'm a little surprised that the label gives zero indication as to where this was made, or what label group it was connected to.  Not even a regular catalog number.  Sheesh.  Well, actually, I have some fake-hit 7" EPs that are similarly lacking in that regard, but they're probably mail-order items that, at one point, had sleeves.  If only this hadn't been stuffed into the wrong jacket--a jacket that was weird enough to begin with.  I... I've been doing these too long.  They're driving me rational.

I was 10, 11, and 12 (one of those three) when these came out (the originals, that is), so I wonder why each and every one isn't familiar.  Was 1967/1968 when I started to tune out rock?  Hm.  That's possible, though it seems a little early.  Of the groups I didn't like at the time but which I like now, The 5th Dimension probably tops the list.  Everyone, I think, has a personal list of groups he or she didn't like at the time but likes now.  I could picture an entire Facebook page devoted to that topic.  ("Tell us why you want to join this page.")

Oh, and I was going to add that no one could sound less like Donovan than whoever did Hurdy Gurdy Man here.  And I guess I'm just now realizing the song is the same two bars over and over.  That's pushing it, even for rock.  It all has an "I'll get this song started eventually..." feel.  (I like Donovan, regardless.)  And Naturally Stoned reminds me so very much of this era--there was constant talk of reaching a natural (as opposed to the other) kind of high.  Actually, nature abounds with substances that'll do the trick, so "natural high" always struck me as kind of... redundant?

They should have called this Yummy Hits, except maybe that would have had an R-rated sound...  ("No, son, you're not getting Yummy Hits!")  And were there any contemporary pop music critics who literally said, "Phooey Phooey to Chewy Chewy"?  I'll bet there were.  To the fakes!!

I hate finding vinyl without the sleeve. You just don't know what info you may be missing. :(

Please accept my humble apologies for my Lack of Thanks......*Cough* *Pandemic* *Loss of Job* *Ack* *Found New Job*....all the Lame Duck McQuade excuses but the Greatness of this has brought Pen To Paper (?).
Highlights for me;
Hurdy Gurdy Man. Haven't heard a guitar tortured like that since watching the fiery end of Jimi Plays Monterey
Elenore. You couldn't provide coffee to the singers and do just ONE More Take?
Kentucky Woman. The Deep Purple Version? (Wait, Neil Diamond wrote this?) I'm not sure if it was good or bad that the Jon Lord Keyboard Solo was skipped.....I think I might of rather enjoyed hearing what the keyboardist had to offer....we heard what the guitarist had to offer *Cough Again*...

More Lee Greatness!!!!! Can't ever thank you enough for these gems!!!!!

Ernie - That's not as bad as the sleeve without the vinyl.

Lee - There are some nice tunes here along with the likes of "Chewy Chewy." I like "Take Me for a Little While" but this fake is probably based on the awful Vanilla Fudge remake. "Sweet Blindness" is a great song that was cut by both its author, Laura Nyro, and The 5th Dimension, a wonderful group, I agree! The excellent Brian Hyland version of "Sealed with a Kiss" was a big hit, but this one may be a cover of the Gary Lewis remake.

"Cloud Nine" was by the Temptations during their regrettable psychedelic phase.

In this case, it wouldn't surprise me if the jacket was blank! Save for "Hit Tunes." it's weird that there's no sign of Jaro at Discogs... Unless it's hidden deeply away in the search results.

Thanks--you have a much better memory of that period that I do! And I was wondering all "Sealed with a Kiss," and I vaguely recall Gary Lewis' version. Lewis, of course, had the non-singing chops of his dad, though I love some of the Playboys' sides. Those were all production--some came close to a Beach Boys level. At least whoever put this out stuck to the same general period--1967-1969--though even the two-year span seems kind of odd. These things were typically issued by the year. But this is the ultimate "Hit Tunes: 25 count" type of generic release.

I loved the Temptations psychedelic period! :)

And yes, it is better to have just the vinyl than just the sleeve, but still a pain.

I hasten to reassure you, Lee, that you are NOT turning rational. But you are being tremendously amusing. I so enjoyed reading this post!

Could this be the Lost Fake LP Motherlode? Somehow it is fitting to be minus a sleeve or jacket.

It may very well be! And I agree that the lack of a sleeve ironically adds something to it. Thanks for dropping by.

Thanks for your kind words! And sorry to post your comment so late--it got stuck in my moderation box for some reason. I don't remember getting an email alert...