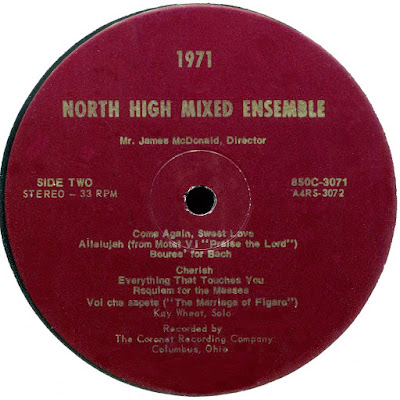 A better label scan, this time--I remembered that I can adjust the scanner brightness by using a preview scan.  Duhh.  Now, I should mention that North High School was close to where I now reside (about an hour away)--in fact, the building is still there, but under a different name.  It's in Columbus, and I'm in Metro Columbus, so this is a truly "local" recording.  And the singing on these tracks is superb--by high school standards, I think it rates as masterful.  The three contemporary numbers were hits by the Association, a group whose songs I've always liked better than its shaky harmonizing.  Thus, I enjoy (cherish?) this choral version of Cherish more than the original single, which aims too high, production-wise.  The Mixed Ensemble does beautifully, and Cherish and Requiem for the Masses are exactly the type of Top 40 numbers that lend themselves to choral presentation.

At the North High FB page, a member agreed with me that it's too bad scared music has been suppressed ("censored" is such an ugly word) from public school concerts, but regard for the arts, unfortunately, isn't part of PC.  That's as far as I'll go, soapbox-wise, but it does seem to be the case with political correctness that, even though the intentions are usually honorable, things are often carried out in a thoughtless and bureaucratic way which reduces works of art to matters of ideology, something which I think should be done only in extreme instances.  But that's just my take, which, combined with 79 cents, will get me a cup of Joe at McDonald's--but only if it's open.

My late foster mother, Bev, told me about a Jewish chorister who was asked why he sings Handel's Messiah, given the anti-Semitic moments in its text.  His reply: Because it's great music.  I'd say "Right on," but I think that slang bit the dust decades ago.  (Hard to keep up with these things.)

In my track labeling, I stayed true to the label typos, such as Bouree' for Bach, which should at least have been Bourrée by (not for) Bach,, and with the accent over the first e.  In fact, it's Bourrée II from Bach's English Suite No. 2--I just found and downloaded a P.D. piano arrangement (in A-major) and I played it on my Casio without too many flubs for my first time since, oh, 20 years.  And the North High ensemble is singing this in either C-sharp or D-flat major!  I would hope D-flat, because it only has five flats, compared to C#-major's seven sharps.  I've played things in C-sharp, but I typically "reference" the notes to D-flat.  I just pretend I'm in the other key--on the piano, at least, one sounds exactly like the other.

Voi che sepate from Mozart's The Marriage of Figaro is drop-dead lovely, as sung by Kay Wheat, and there's lots of skillful bass playing on the pop sides.  Stand up or electric?  Could be a double bass, close-miked--that would make it sound nice and fat.  Remember that the Coronet Recording Company was responsible for the sound--a North High School alumnus described microphone stands everywhere during the school's recordings.  Like the A side, the B side is simply way above the high school norm.  We're hearing a great deal of talent and dedication--and a lot of love for music.  Being pushed to do your finest is a great experience--with the right teachers, at least.  And the North High graduates have nothing but great words for their teachers, and only a tight, mutually respectful partnership in that regard could have produced sounds of such a high caliber.  Enjoy!

Come Again, Sweet Love
Allelujah (from Motet VI "Praise the Lord"
Bouree' for Bach
Cherish
Everything That Touches You
Requiem for the Masses
Voi che sapete ("The Marriage of Figaro")--Kay Wheat, solo

I dunno if I like these as much as the others, but that's just me. :)

We can't control what we like, or to what degree. (That sounds like an old proverb.) I always think it's funny when people get annoyed then someone isn't so crazy about something (or else flat-out dislikes it): they'll ask "why." And there's no reason for why we like some things better than others, or not at all. I try not to be that way.

So, why do you like these less?? (Just kidding.) I kind of like the switch between the current pop/jazz band mode and the traditional choral mode. But it's definitely a study in contrasts.