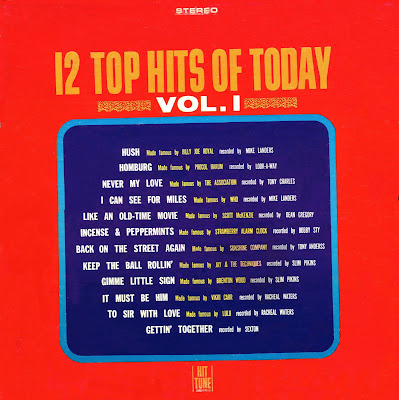 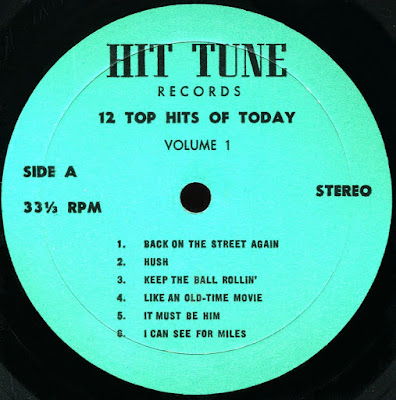 A repost from March, 2019.  I noticed that the link was no longer working, and so I decided to re-up the files in my current higher bit rate.

Twelve Top Hits of Today--"today," in this case, being 1967.  I'll assume that's the year of the LP, though it could have been early 1968.  And, by the way, while I love my Epson scanner, it doesn't always get the colors quite right.  For instance, that's a green border around the titles on the front jacket, not a blue one.  Oh, well.

And this is supposed to be a stereo LP, but there's no stereo to be heard, so I combined (aka, "summed") the channels for better fidelity.  These are fakes, of course, and humorously enough, beside each title the front jacket lists the original artists ("made famous by") followed by the impostors ("recorded by"), and maybe someone was fooled by this tactic, but to my eyes the white font stands out over the yellow, the yellow being the real people--Procol Harum, Strawberry Alarm Clock, Lulu, etc.  A failure to trick buyers may explain the apparent lack of a volume 2.

The performances range from competent to not so competent, with Homburg especially dreadful, the singer sounding like the original vocalist after a week without sleep.  By contrast, Mike Landers (who must have been multi-tracked?) does a decent version of I Can See for Miles, which was one my big favorites growing up.  It hung on for years as an AM oldie.  The main problems with this copy of Miles are the weak vocal harmonies and the guitar chords going south on the fadeout.  Racheal Waters has the best singing voice of the lot, but her handling of Vikki Carr's hilarious (it seemed so at the time, in 1967) It Must Be Him lacks Carr's bordering-on-panic conviction,  and on To Sir with Love, she seems unfamiliar with the melody.
I'm positive the "Slim Pikins" on this LP was no relation to actor Slim Pickens.  And it was Tommy James and the Shondells who did the original Gettin' Together.  Either Hit Tune Records didn't know that or it misplaced the info.

I seem to remember, back when the Carr record was playing every five minutes on AM radio, that I would answer the "And then I die" lyric with something like "All right--then die, already."  On that lovely note, to the 1967 fake hits:

I just listened to "Hush" this AM - the version by its author, Joe South. Great song!

I don't recall "Homburg." I had the first Procol Harum LP, but it didn't include that number. Discogs says it only appeared on the European issue.

Like you, I couldn't stand "It Must Be Him." There was a fashion for overwrought French songs at the time.

Unlike you, I didn't care for "I Can See for Miles." The Who's first LP is great, but I lost interest after that.

I remember "Homburg" from the group's 1972 "Best of" LP. It was my brother's--come 1972, he was listening to a lot of rock, while I'd written it off, pretty much. Terrible song, and the bad singing on this fake version seems almost like parody of PH's lead singer, who had trouble staying on key. Most everything by the Who, I can live without, but "Miles" had a kind of Beach Boys vibe to it. "It Must Be Him" was almost a parody of itself. I don't mind overwrought fare (I love "MacArthur Park," for ex.), but "Must" is like a recurring punchline.

Interesting comment about "MacArthur Park." Do you suppose Jimmy Webb was influenced by Gilbert Becaud and other such writers?

Maybe. I recall reading that Webb was aiming for something more serious, pop-wise. Or at least what was, at the time, considered to be more serious.

Hey Lee, Well as you know I love LPs to clean by. This is a nice one. Don`t get me wrong, but it is perfect to clean a bathroom too. You can not dance usually in a bathroom.
Racheal Waters sounds a bit to me like a Shirley Bassey. I think I recognize maybe 5 songs. This was not my favorite oldies period. So reading the names on the cover of the original artists, some rang a bell, others have not. With the exception of seeing their names somewhere on the web.
Production-wise I think they really must have been on the cheap side. The quality of the vocals are, well? Maybe, Racheal should have sung them all.
But still, a fun listen. Bryan