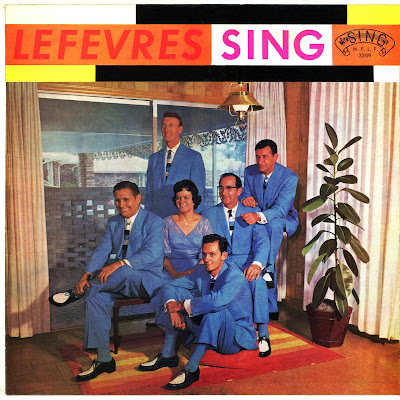 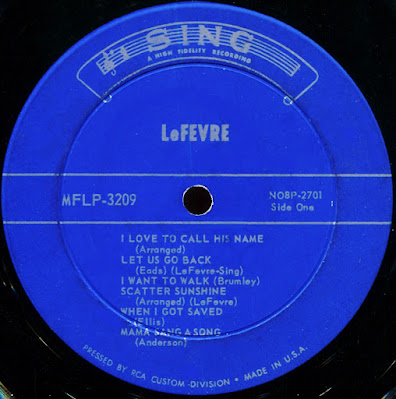 There's something very apt about an LP called LeFevres Sing on the Sing label.  And there's something slightly strange about the label title, which is simply "LeFevre."  It could almost have a buyer thinking he or she inadvertently purchased a solo LeFevres LP.  But, such is not the case--we get the entire gang on this excellent LP.

This Wikipedia entry tells the group's remarkable history, and a quick check at Discogs reveals that most of the LeFevres' LP output happened on this label (Sing), though they also recorded for Starday, Canaan, and LeFevre Sound--the latter clearly their own label.  My late foster mother, Bev, fondly recalled the group from its TV show, and, back in the cassette era, when I regularly put thrifted sacred LPs on tape for Bev and John's car player, I was always happy when this group turned up, because homerun hitters aren't that easy to come by in gospel.  For instance, I spot-listened to (and rejected) four gospel albums by four different artists before settling on this one for today's post--the others included a good LP ruined by an "invisible" needle dig, plus one of the worst quartet efforts my ears have yet experienced.  I won't reveal the name of the group, since I'm not here to poke fun at inadequate performers, but if I were to start a series called "When Quartet Singing Goes Wrong," that LP would be the headliner.  But I'm not here to mock.

No such worries with the LeFevres, who rank with the Sego Brothers and Naomi, The Blue Ridge Quartet, The Statesmen, and other top-rank acts in terms of reliability--none of these groups seemed capable of making a bad LP.  And I'll confess that most of the titles on this 1963 album are new to me, though I have a feeling I should know most of them.  At any rate, Bill Anderson's Mama Sang a Song graced the blog last post in a fake-hit rendition, and Sweet By and By, On the Battlefield, and Where We'll Never Grow Old (aka Never Grow Old)--all flawlessly done--are "old time" classics; the second title the sort of fast-tempo spiritual this group excelled at.  I wish the accompanying musicians had been listed on the back--I'd love to know who the outstanding ivory-tickler is.  The back jacket does contain the notice, "A unit of the Gospel Singing Caravan," and the Gospel Singing Caravan is explained here.  I think I've encountered them on vinyl from time to time.

Not only are these performances as solidly professional as we could wish, the album's group photo (despite a tad too much contrast) is a model of its type.  Excellent group shots not being the gospel-LP rule, I thought I should give special notice to this one.

Lee,
Quickly, getting ready for church, thanks for providing this digitally and clearer for me, too. As far as the musicians, I believe (for the most part, if not all during these days), they provided their own, Eva Mae (sp) Piano, Alf, Lead Guitar, etc. Usually (like in Scatter Sunshine), she'd started, then they'd quickly fall in with her, love it LOL! On the songs, I Wanna Know More, is page 6 in the Church Hymnal and it (the song) was written by a LeFevre, can't remember which one. Of course, with them being bigwigs in the Church Of God and so musically inclined, they had a big hand in that book's production in 1951. Going for now, love and prayin' for ya!

Really enjoyed the upbeat ones! thanks

Glad you're not here to mock, Lee. The web has too many wiseguys already. I prefer actual wisdom, research, analysis, and appreciation -- at all of which you excel. Thanks for being your own self here!