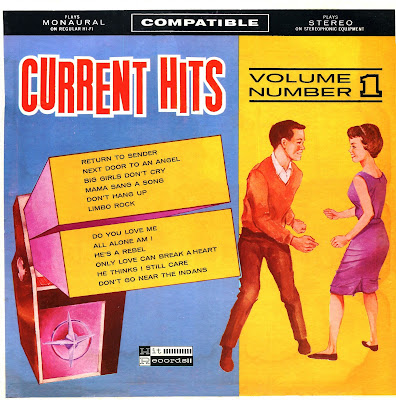 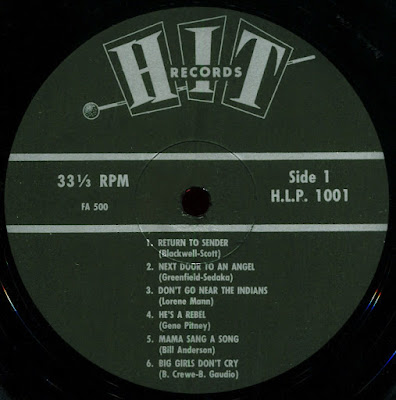 Well, I had been Google-searching for this LP's release year.  The tracks were all recorded in 1962, but Discogs doesn't tell us when this collection arrived.  Turns out, all I had to do was read the back jacket notes:

"In this album entitled Current Hits, Volume 1 (1962), we are presenting to you a collection of the best selling songs of this period.  We might well entitle this LP 'The Sound of the Hits' because we have left no stone unturned in our efforts to provide you not only with the hit songs but with an actual duplicate interpretation of the 'hit sound' as it appears on the original recording by the original artist."  It never occurred to me to call these things "duplicate interpretations," but it has a nice ring.  And that paragraph may set a record in terms of avoiding comma usage.

This LP's "Compatible Mastering" was done in New York, since said technology had yet to arrive in Nashville.  I refer to the cutting head that produced a groove playable with both monaural and stereo styli--the innovation that allowed stereo Hit Records to be played on a "regular hi-fi" AND which saved Hit Records a lot of money, since it therefore didn't have to bother with a separate mono and stereo catalog.  Smart.

This LP is a gift from Diane, and it's one of those discs which visually grades VG+ but which turn out to have "invisible" wear throughout.  That will happen--this, of course, is why visual grading can be tricky.  However, the rip is more than adequate, and it's wonderful to have the first duplicate-interpretation LP put out by Spar/Hit Records.  So, thanks, Diane!

Mostly good performances on this one, and mostly nice songs, though I've always hated He's a Rebel.  I can't help it.  I know it's a classic oldie, and I know that Gene Pitney wrote it, but it's just so empty-headed.  "Just because he doesn't do what everybody else does"--that's what makes him a rebel.  And, somehow, we know that she doesn't mean he dresses in a clown suit and yodels the greatest hits of Gene Austin.  Or that he's a scientific or literary genius who's been pushed ahead in school five grades.  "Just because he hops to class a-riding on a pogo stick.  Wears his boxer shorts outside his pants, but I love him, anyway."  That wouldn't have worked.  No gal wants that much of a rebel.

The best of the duplicate interpretations, imo, is Return to Sender, which was credited to "Ed Hardin" (possibly Buzz Cason) on the Hit Records single, while the least would have to be Big Girls Don't Cry, which is lively and fun but missing something in the vocal department. On its 45 rpm incarnation, Big Girls was credited to the fictitious Chellows (yuk, yuk)--and here's where I mention that I've rounded up all the artist credits for your convenience.  This meant checking out the singles, since the LP carries no performer info.  Oh, and in the classic budget tradition, Hit Records slightly mismatches the front cover title (Current Hits Volume Number 1) with the back cover version (Current Hits Volume One).  Meanwhile, I think that's supposed to be a bullseye on the back cover, but maybe the illustrator was a moonlighting Salvador Dali:

Furthermore, between the labels and jacket, the track listings are out of sync, so: budget mission accomplished.

"He's a rebel 'cause he puts peanut butter in chicken soup; He's a rebel 'cause he travels in a one-man ragtime group."  Oh, and Bill Anderson's Mama Sang a Song is also scheduled to show up in our Sunday morning gospel post (by the LeFevres), so we're keeping it all in the blog.  Er, whatever that means.  More from the notes: "This is a quality reproduction from every aspect."  Hm.  I thought this was a first-run HLP 1001.  That's odd.

By a curious coincidence, I tried to be a rebel back then by wearing a clown suit and yodeling the greatest hits of Gene Austin. Turns out, "My Blue Heaven" did not make me a hit with the girls. Or maybe it was the clown suit.

Some good songs here, but I can't remember "Don't Go Near the Indians." Probably just as well.

That's not my favorite track, either. And the ending revelation (that the girl is the son's sister) kind of telegraphs itself. However, I've always known the title--just not the song. Sorry your efforts at rebelling didn't work. I played rebel at my office job when I wore extremely loud polyester ties after a tie requirement was put in place. It was my comment on the policy, which was sort of illogical, given that we weren't interacting with the public--at least not in person.

"Duplicate interpretations" is officially the name of our rock group now! (We have one, don't we?) As always, Lee, you're welcome. And as always, thanks for making this, uh, quality reproduction sound so swell.

Lee - I imagine you can recreate that tie wardrobe in the same stores that provide these recorded gems.

You wrote: "The best of the interpretations, imo, is Return to Sender" You may be interested to know the original Elvis hit was recorded in Nashville and some of the same musicians worked on the Hit Records version. You can hear Boots Randolph's distinctive sax throughout both versions. Another way to save on Hit Records rehearsal time..hire the same musicians that just recorded the song a month before.

In the 10th Grade I rebelled by wearing a multicolored polka-dot shirt my mother made for me. Alas, the bullies were not intimidated.

That's very interesting. The LP's liner notes mentions that original musicians are used--it suggests that this is true for most of the tracks.

I'm surprised that didn't work. That sounds like a surefire anti-bullying ploy!

Wikipedia says "Eskimos" was a sequel. I just listened to it--same melody. I would have figured it's a parody.

Apparently, "Indians" had been slated for Colder, but Colder was delayed by an acting job, and Rex Allen recorded it and had the hit. As I'm sure you know, in real life Colder was Sheb Wooley.

Lee,
Haven't heard these yet, may just have to get it, even for a little while, to hear Indians. My Pawpaw had that 45 (Rex Allen) and gave it to me sometime as a kid. It's long gone now, it being in the old house. I believe the flip side was entitled, Touched So Deeply With Your Love, IMHO, a Jim Reaves-style cut. 'Til later, love and prayin' for ya!

Lee,
Just a couple more things from this one, if you please. I recognized some of the songs from years ago, especially one, so I did a little googling. Long story short (as a question), was Connie Francis' song the female version to and/or an answer to George Jones? From what I saw, he recorded it on January 4, 1962, so I'd say his was first, either way. Eskimos was a parody of Indians, BTW, same as one I heard of, concerning our earlier question, She Thinks I Steal Cars from Pinkerd and Bowdon, however they're spelled. If memory serves me correctly, I first heard them some thirty-plus years ago the first time I ever heard of John Boy and Billy, on a station out of Charlette, NC, while visiting family in Todd, NC, but enough of that. Looking forward to your LeFevres post tomorrow, as I believe I know what album it is. The tape transfer I have/had of it, the first side of the album is in horrible shape, but it played with no skips and side two is perfect, especially compared with it's counterpart LOL! It may have been one of their first stereo efforts too, a lot of Bass, I remember. Their first such offering, was entitled (I believe) The LeFevres In Stereo, which had no other effects added, just studio ambiance. Reckon they spent all the money on the stereo process, so no echo and such was in the budget LOL! Going for now, love and prayin' for ya!

Wikipedia identifies the Connie Francis "He Thinks I Still Care" as an answer to the Jones hit, so, you're correct. And, unfortunately, my copy of the LeFevres LP is mono, but the sound is excellent. The LeFevres had one of the most effective vocal mixes of any gospel group--just ideal for the studio. Btw, it's their "LeFevres Sing" LP on the (no irony intended) Sing label.

Lee,
Thanks for the clarifications. And, maybe this is for tomorrow, but, I have to agree, they had a good mix, to say the least, always had good (and varied) instrumentation, too. Some good songs on that album, looking forward to it, love and praying for y'all! Oh and I believe Sing was their label. Can't remember, maybe they had Skylight, maybe both.

Hi Lee, as an impressionable young child my eldest sister used to play this era of music to me. So I have heard a few of these titles. Return to Sender is my favorite Elvis song. I like He's a Rebel because as a kid it was a naughty song to me. All Alone Am I by Brenda Lee and Blue on Blue by Bobby Vinton are my favorites from their catalogs too. So nice to hear covers that are different, but makes me yearn for the original versions.
As to the Don't Go Near the Indians song, I can only say it is not PC now and was not when it was written. "two wrongs don't make a right", but I am guessing the song reflects the feelings and times of the expansion of the west? Sorry, I should not be preaching. Bryan