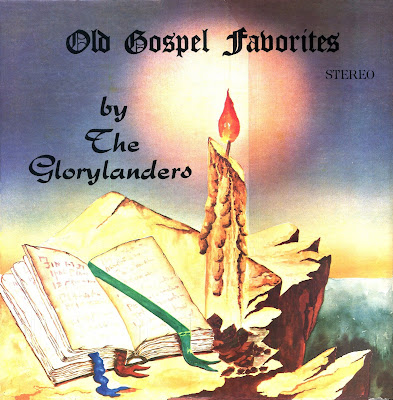 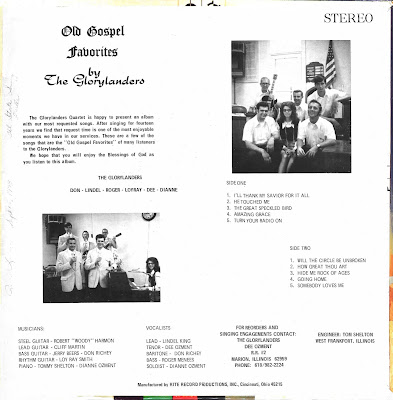 Interesting front cover stitching, there--I have no idea what happened, aside from the fact that the contrast obviously changed during the course of my four-angle scan.  The original image doesn't have a light and dark side--it just came out that way.  My scanner is an excellent but, by now, almost antique device.  I should consider upgrading, but I've grown to love this ol' Epson, which came bundled (I forget when) with amazing photo editing software.

And... excellent amateur gospel sounds from the Glorylanders of Marion, Illinois.  The Rite Record Pressings dating guide (say that several times) places the matrix numbers (30373/30374) at approximately 1972, whereas the writing on the back jacket reads "Sep., 1973," but close enough.  I'm guessing that the back jacket writing is by the previous owner, that there are no group signatures involved, though I can't tell for sure.  At any rate, just for the sake of quibbling about the LP title, neither He Touched Me nor Turn Your Radio On were especially old when this LP was made, but Old Gospel Favorites is such a fine, traditional type of title, I'm fine with that.  It sounds proper and heartfelt.  Properly heartfelt, even.

Solid performances, even if the instruments slightly overpower the vocalists in a number of spots, and it's nice to have the 1907 Ada Habershon/Charles Gabriel Will the Circle Be Unbroken ("There are loved ones in the glory..."), as opposed to the Carter Family variant, though there's nothing wrong with the variant.  And 1907 is definitely a vote for "old."

As a rule, I'm never thrilled to see Amazing Grace in a gospel tracklist, since versions of this mega-standard tend to be throwaway stuff, but this rendition is a pleasant surprise: It has a fresh, pleasant sound, just like the other tracks.  And, to answer the age-old question, "Why are there six people pictured on a quartet LP?" please note that one of the people--Dianne Ozment, to be precise--is both an extra singer ("soloist") and one of two pianists, while the instrumentalist is, well, one of the instrumentalists.  By the way, I've never figured out the tradition of separately crediting singers and musicians.  I mean, aren't singers musicians?  Inquiring minds want to know.

Not surprisingly, Hide Me, Rock of Ages, which has a 1940s Stamps-Baxter kind of sound, is from 1946, with a 1947 Stamps-Baxter copyright.  Somebody Loves Me--not the 1924 Gershwin song, of course--ends the album on a quite upbeat note, and as I type this, I'm still searching out the year of composition for that title.

And here we are--1940, and originally published in "Charming Refuge."  Now we know.  Sometimes, my songbook collection comes in handy... 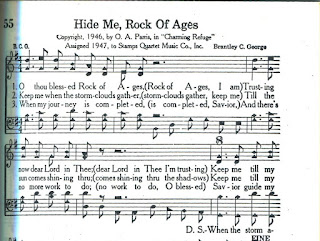 Discogs gives 1972 as the year for this LP, which may well be the case, but I'll stick with the writing on the back (which appears to start with "Rich and Linda") and the "Sept 15 1973" date.  (Update: See Bob's comment.)  The search word "Glorylanders" brings up a good number of artist matches at Discogs (well, six, anyway), including a 1966 LP credited to this group but which doesn't appear to be by the same folks.  But who knows?  I asked the cats, and they have no idea.  I get the distinct impression they don't care.

Enjoy!  (My PC is back to rejecting Workupload files, so it's Box.com today.  And just after Chrome had ceased having issues.  A very moody browser.)

I'll Thank My Savior for It All
He Touched Me
The Great Speckled Bird
Amazing Grace
Turn Your Radio On
Will the Circle Be Unbroken (Habershon-Gabriel)
How Great Thou Art
Hide Me Rock of Ages (Brantley C. George)
Going Home
Somebody Loves Me (W.F. and Marjorie Crumley)

Late 1972, Lee. Probably November or December. I found this :

“The Gloylanders were group of high school boys started singing around 1959. Members came and went over the years, and about 54 years later, when Dee went home to be with our Lord, the group was still going strong. But that time, it consisted of 3 family members and one non-family.”