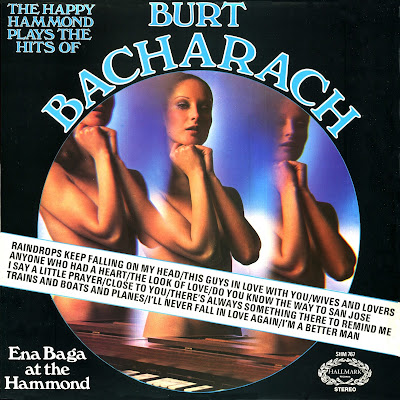 Well, first off, The Happy Hammond Plays the Hits of Burt Bacharach sounds slightly hilarious in the present year of 2021, though there's a lot of neat alliteration there--Happy Hammond, Hits, Burt Bacharach.  But, the thing is, we have an organist--Ena Baga--who was highly regarded in British light music circles, and who started her professional career as a cinema organist (playing for silent films) when she was  fourteen, apparently (we're talking 1920).  So, whatever you think of Hammond organs, happy or no, the playing here is tasteful and expert.  My sole complaint centers on a single track--Wives and Lovers--which Ena presents, not as a jazz waltz, but in straight 1-2-3 triple time.  Like a regular waltz, that is.  A jazz waltz is supposed to swing, with the second count slightly ahead of the beat in the triplet-y fashion of swing.  But the sheet music for the song is written in straight 3/4, so Ena can be forgiven.

By the time Burt had hit the big time, eighth-note syncopation was the rule in pop and rock, which is why Wives and Lovers has an older-generation sound to it (and, maybe, because Jack Jones sang it).  And, overall, Ena fares more than adequately with the new-fangled 1960s rhythms of Do You Know the Way to San Jose, There's Always Something There..., etc., and I just admire her effortless pop-organ technique.  I suppose the Hammond rhythm effects are kind of dated (not sure if they're programmed or "live"), but this is from 1972, and it is presumably geared toward an older listenership (though the notes specify "all ages," which I sort of doubt).  I personally love the Hammond sound, and I have a word I use to describe it, but one which I won't divulge, since it can easily be taken the wrong way.  The Hammond model used by Ena is identified as a TTR, a European make (of course).

Burt is known for quirky meters, though I've always regarded his signature touch as the quirky phrases that fill his songs (and which typically, but not always, manage to stay within the common meter of 4/4), with occasional time signature switches, such as the 5/4 to 4/4 bit that occurs first thing in Anyone Who Had a Heart.  I Say a Little Prayer goes further, jumping from 4/4 to 2/4 to 3/4 to accommodate the phrases.  Anyway, save for missing the necessary jazz-waltz feeling of Wives and Lovers, Ena (born in 1906) does very well with Bacharach's superb, sometimes tricky music.  Extremely pleasant (did someone say "easy"?) listening.

I wonder what Ena thought of the front jacket?  Did she say, "I will not stand for that jacket?"  And did they reply, "You're under contract"?  I can easily picture this LP in a "Woolies" (Woolworth) rack in Scotland, circa 1978, when I was stationed there.  Woolies carried Hallmark and MFP (Music for Pleasure) budget LPs.

The Happy Hammond Plays the Music of Burt Bacharach--Ena Baga at the Hammond (Hallmark SHM 767; 1972--a product of Pickwick International)

Posted by Lee Hartsfeld at 1:43 PM

Lee @i think you're trying to put lipstick on a pig. To my ears this is an artist steeped in the past; a cinema organist let loose here on an instrument capable of so much more. ~If I had bought this,at the time, thinking it would swing, I'd have been deeply disappointed. Ena plays to her strenghths, but the limitations of her pre-war style are evident. In the 1970s this was well and truly for old people. Older even than us!

Hm. Let me reflect on that!

That cover is something else, but I guess it was par for the course. I've seen lots of semi and full nude covers from the UK around this time and a bit earlier. I think the entire Stereo Action series was reissued with topless covers around this time. The Europeans seemed to be much more open to casual nudity than us uptight Americans.

That does seem to be the case. And, if you're going to sell LPs with sex, why be coy about it?