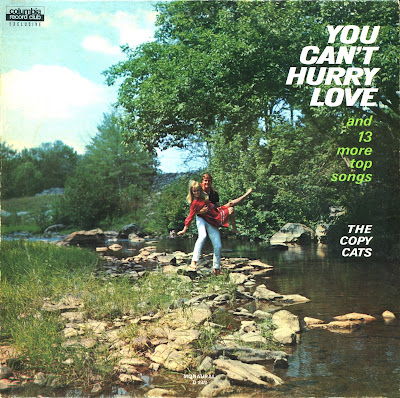 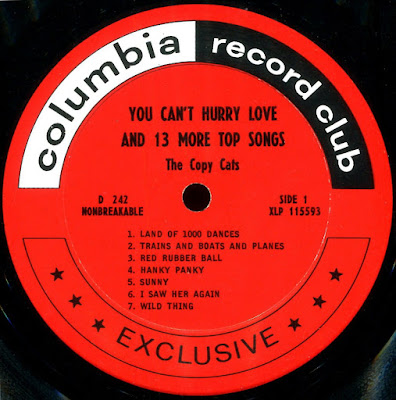 From 1966, Columbia Record Club fake hits, by the no-cheating-in-the-packaging Copy Cats.  I mean, let's cut to the chase--No "Jack and the Hit-Makers" or "Columbia Record Club-eers;" just the plain ol' Copy Cats.  Honesty in packaging.  And these are what you might term boringly competent fakes, depending upon how fake you prefer your fakes, or you might find them refreshingly spot-on.  All the tracks are in glorious mono, though I think I have a stereo copy someplace in my overflowing rows.  And there's unmistakably a certain amount of flanging happening in/on select tracks (Bus Stop, in particular), and I have no idea why.  Typically, flanging involves a second or third tape machine on which the tape speed is subtly manipulated to produce either a delayed or ahead-of-time out-of-sync effect--the type I get when I place two MAGIX files atop one another.  A hollow "wooshing" sound is one of the features of flanging.  I generally find it annoying.

My first thought was that somehow the flanging happened in the studio when Columbia combined the left and right channels, but I can't believe those could happen out of phase, unless somehow Columbia was using separate machines for the right and left channels.  Such a thing seems not only improbable, but impossible.  So, it's a mystery.

I was nine when these songs dominated the Top 40, so I recall all of them first-hand--except for Hungry.  Sam the Sham and the Pharaohs (Lil' Red Riding Hood) seemed pretty cool to me at the time, though not so much now that I'm 64.  I remember the Hollies' Bus Stop getting tons of airplay both during its hit period and afterwards as an oldie, and I loved it, whereas Hanky Panky did, and continues to do, nothing for me.  I don't remember when I discovered Tommy and the Shondells were covering a 1963 record by the Raindrops, a group consisting of a multi-tracked Ellie Greenwich and Jeff Barry, but it was a bit of a surprise, if not a shock.  The Shondells gave the number a garage-band feel, which was their prerogative, though I think the lyrics sound more appropriate in the Greenwich-Barry original, which was a typical song describing a dance, a song type which included The Twist, The Loco-motion, and, in earlier eras of pop, The Creep, The Bunny Hop, and Charleston.  The Lovin' Spoonful's Summer in the City was another mega-hit, at least in my Top 40 market (NW Ohio), and it, too, joined the perpetual oldies loop for the next however many years.  Which I mostly didn't mind, since it's a fine number.

Today's Bacharach-David number, Trains & Boats & Planes, is regarded as one of  Burt and Hal's classics, though I've never been overly fond of it.  I've tried to fall in love with it, but you can't force love.  Nor can you hurry it.  And You Can't Hurry Love is a number I couldn't wait to be unburdened with back when AM stations were repeating it long past its chart life, but now, years later, I'm free to objectively evaluate its merits, and I've decided it's a superior number and production, even in this Copy Cats copy-cat version. Wild Thing was another played-to-eternity oldie, and I frankly never cared for it, nor do I care for it now.  So there.  However, my take should have no bearing on your enjoyment or lack of enjoyment of this inane, slightly irritating classic.  A nice version of Guantanamera, a song popularized by Pete Seeger, and whose folk history I don't remember much of, except that the origins are very strange (a Cuban songwriter/radio host singing about a girl from Guantanamo and adding one verse per week, or something like that, with the addition of beautiful verses by 19th century poet José Julián Martí Pérez).  Bottom line is that, in its present form (forms?), it works superbly as a patriotic/protest song, as a plea for the rights and dignity of the poor.  I find it incredibly moving, however strange its history.  The Copy Cats do a very decent job copy-catting the excellent Sandpipers.

Fourteen tracks, though the entire playlist only takes about 39 minutes.

NOTE: Once again, my Chrome browser is telling me that the downloaded zip file is "dangerous" (I always do a test download), which it also did with my previous two uploads.  However, last time, the notice stopped happening within a day, so it's clearly some kind of temporary glitch occurring somewhere (in my browser, at the hosting site...?).  Please let me know if you have any issues.  Update: I've added a Box.com link.

Posted by Lee Hartsfeld at 4:20 PM

I assume the Land of 1000 Dances is a take on the Wilson Pickett edition, not Cannibal & the Headhunters' almost excessively cool version of a year earlier. I can still remember seeing them lip-syncing it on some TV show, doing the Jerk in a blase manner. I don't like the wicked one's single very much.

I can't stand Hanky Panky and couldn't even back then. I don't think I have ever heard the Barry-Greenwich single.

I surprised you don't remember Hungry. Not a great record, but it was a big old hit.

My favorite among all these songs was I Saw Her Again Last Night. I've often wondered if the false entrance was intentional.


Hi, Yes, I have issues with the latest download...It's the first one I haven't been able to get, Can you re-post it & maybe use a different site...Thank You....SkpmOOOse :)

The Copy Cats? Talk about your truth in advertising!

Buster, I was recently on a M&P trip and wondered the same thing about the flubbed entrance. I read somewhere that it was an unintentional mixing error, and the producer (Lou Adler) liked it so it stayed. Bugs me every time. Michelle must have loved singing about her own infidelity...

Huh, never seen that before. Firefox scanned and and tagged it as a threat after it was downloaded. I had to tell it to ignore the threat and save it. Then I scanned it with my AV and it didn't seem to have any problem. I wonder why it's throwing off a false positive with some scanning engines and not others? Weird.

Cool thing, it makes my heart sing. Never seen this record in the wild -- wow!

Greetings. I re-uploaded the zip file to Box.com.

There must be something wrong at Workupload... Sorry about that!

The weird thing is, this is only happening to some of us (including me). Checking at Workupload, I see that there have been 40 successful downloads. Yet, my browser is still rejecting it. Very strange.

Hi Lee, I prefer those cheap label fakes as they seem to just have something extra in them. For a top label, these fakes I find are missing something. I was bought up hearing pre-1965 music from my parents and eldest sister. Being born at the tail end of the bicentennial year of 1976, this whole period, the late '60s and '70s was not played for me.
Okay, no one wants to hear this again, but once I installed Windows 11 Preview, I completely switch out of Chrome to Edge and Bing. I will never google again unless I need to, i.g. Chromebook. I only bing now. The downloads are no problem and are super fast now due to Windows 11 Preview. Bryan

9/12/21
RobGems.ca Wrote:
Funny you should mention not liking "Wild Thing" too much. Apparently, The Troggs themselves didn't care for it much either when their manager Larry Page (of Page One Records in the U.K.) first played Chip Taylor's demo for them to cover. The Troggs looked at their manager funny and wondered in astonishment, "Oh God, What are they trying to do to us?" They eventually gave in to page's insistence to record it, and it was issued in the U.S. on two labels (Fontana and Atco Records, respectively.) Also, the Mamas & Papas cover "I Saw Her Again" is nowadays considered scandalous that somehow slipped past the censors back in '66. Apparently, this song was written by John Philips & Denny Doherty about Denny having an alleged affair with member Michelle Gilliam who was married at the time to John Philips; the lyrics were from Denny's point of view, who dated Michelle behind John's back, so the situation is personal. "Hungry" was from mid-1966, and was another hit to Paul Revere & The Raider's long string of hits. I think it was another song published by Screen Gems/Columbia music co. from the Brill Building (it was formerly known as Aldon Music until Don Kirshner sold the publishing company to Columbia Pictures in May 1963.)

No problems downloading this file. Your computer may be suffering from the "Sour Circuits". That's what I attribute any nonsense on my computer. Then I go make a glorious PB&J and I am able to continue without anything valuable
being thrown.

Maybe these fakes are simply not fake enough, at least compared to the more low-budget fakes. I find them unusually solid and "legit," and it does take some of the fun out of the proceedings.

Thanks for the very interesting background. And, believe it or not, I've never really paid much attention to the lyrics of "I Saw Her Again," the song not being one of my favorites. I didn't know what it was about! I learn something new every day...

True, it's not worth having a fit over, but it's happening to other users, and to multiple browsers, so I suspect it's something amiss with my hosting site vs. a problem with my PC. The site recently stalled for two or three days, after which a number of my past links stopped working. So I suspect Workupload is the source of the trouble. Then again, the downloads ARE working for most, it would seem. I wish the problem was less ambiguous.

I only listened to the songs I liked in the 60s and found them satisfying, and in some cases almost superior. Thank you for not rejecting them for being too good.

Been sneezing like crazy for the last week. What's going on?

It's the ragweed pollen--it's giving me fits. I'm waking up so tired, I can barely move. And glad you enjoyed the selected fakes. I like the way you put that--not rejecting these fakes for being too good!

Lee -- drink hot tea, with honey from the bee.
This LP is just about as "Holy Grail" as it gets in the fake realm. I thank thee, Lee.