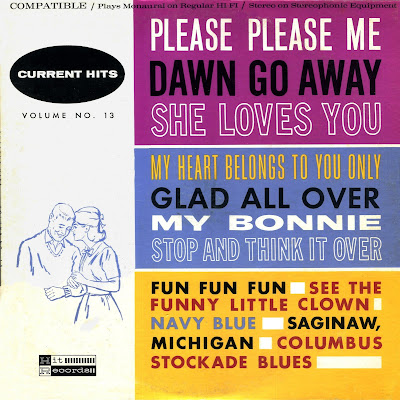 Volume 13, already!  And we're only at the starting point of the Top 40 British Invasion, so you know Hit Records was really churning these things out.  Given that most of these fake hits were rush jobs, they're generally highly energic and catchy--these musicians took their task seriously.  And some titles capture the sound of the originals quite well (e.g., Navy Blue, See the Funny Little Clown), while others capture, not so much the exact sound, but the exuberance of the official hits--I'm thinking especially of the "Jalopy Five" treatment of Fun, Fun, Fun, which I love in this version, despite the slightly rough harmonies and a few stumbles in the lyrics (they fumble "she walks, looks, and drives like an ace, now," for instance).  But it has to be said that the Beach Boys' harmonies were (imo) the toughest to emulate, at least in 1964--even tougher than the classic McCartney, Lennon, and Harrison blend.  And I doubt the Hit Records gang had a generous rehearsal schedule--I'm sure it was more like "Do these.  See you in a couple hours."  Anyway, the Carl-Wilson-imitating-Chuck-Berry opening guitar is memorably faked here.
By far, the LP's most spot-on imitation--perhaps with even more drive than the original, if that's possible--would have to be My Bonnie, possibly my favorite Hit Records fake of all time.  It's a killer cover, and the history of the original is probably known to most of you, but it's worth reviewing: recorded in 1961 in Hamburg, Germany, then released in 1962, making a decent showing on the German charts.  Tony Sheridan is the lead singer, backed by "The Beat Brothers" (guess who). The U.S. co-release, on Decca, didn't do so well, far as I know.  Come 1964 and Beatlemania, the single was reissued on MGM in the U.S., credited to "The Beatles with Tony Sheridan," and it obviously charted well.  (MGM even put out an LP featuring all the Hamburg Sheridan/Beatles tracks, with filler by "The Titans."  A downright budget-label thing to do.)  Anyway, the Hit Records My Bonnie rocks the needle out of the grooves--this version still amazes me, ever since I thrifted my first VG-- thrift copy.
Dawn (Go Away), my favorite Four Seasons track, is given a not-too-shabby treatment here, and while the vocals wobble (weeble?) here and there, the overall production sounds fabulous--beautifully engineered and produced.  Similarly, the other two Beatles tracks (She Loves You and Please Please Me) won't have you mistaking the singers for John, Paul, and George, but in terms of capturing the vitality of the originals, these succeed very nicely.  Compare (if you dare) these versions to the tired-blood fakes featured on the dreadful Palace label LP, Beatle Mash (by "The Schoolboys," to whom Palace simultaneously assigned two other group names!), featured last year in April at this blog.  May I be forgiven in the afterlife...
The Dave Clark Five's Glad All Over was apparently easier to fake than the Fab Four and BB sides, though the engineers should have added a couple extra layers of echo to make things sound more authentic.  The final two tracks--Columbus Stockade Blues, and Saginaw, Michigan (is that Bobby Russell on the latter?)--are expertly done, and they initially appeared on the Country & Western Hits label, a Spar sublabel, of course.  And this was a gift from Diane, who found a number of Hit Records LPs on the cheap after I'd mentioned my continuing search for these LP comps.  Thanks, Diane!
Oh, and no artist listings on the labels, but it was easy enough to locate the original credits (mostly fictitious, of course) via Discog's section of Hit Records singles.  I included these on the mp3 tags and down below.
DOWNLOAD: Current Hits, Volume No. 13
Dawn (Go Away)--The Chellows
She Loves You--The Bugs
Please Please Me--The Boll Weevils
My Bonnie--The Boll Weevils
Navy Blue--Connie Dee
Stop and Think It Over--Dotty and Dan
See the Funny Little Clown--Bobby Brooks
My Heart Belongs to Only You--Bobby Brooks
Fun, Fun, Fun--The Jalopy Five
Glad All Over--The Jalopy Five
Columbus Stockade Blues--Jack Bond
Saginaw, Michigan--Jack White
Current Hits Volume No. 13 (Hit Records HLP 413;  Probably 1964)
Lee
Posted by Lee Hartsfeld at 5:07 PM

"See the Funny Little Clown" was the first hit of Bobby Goldsboro, whom I generally can't stand, his nadir being "Watching Scotty Grow." But then he also recorded the incredibly strong "Little Things," which is absolutely one of my favorite records of the time.

This has very little to do with your collection, of course!

What about "Honey"? I always thought that was Bobby's greatest crime to the Top 40. But maybe I need to give "Scotty" another listen. (If I dare...)

No question that "Honey" is sickening. But there is something about "Scotty" that makes my skin crawl.

You know, I just might have to agree. Not only is "Scotty" ultra-maudlin, it has that annoying "That's muh boy" tag. At the time, that particular detail drove me nuts.

I see a lot of the records in this series, and I wonder if it's possible to grab them all. Then I figure it's a task best left to you and walk away. I collect enough stuff already. Found a Dinah Shore LP on Project 3 last night that I'd never seen or heard of before. :)

Happy to help, Lee! You do such a great job digitizing this stuff. Not to mention your cover clean-ups. I know the stuff I send you is usually trashed out, then it looks great when you post. And wow, Ernie -- I shop a lot for Command/Project3 LPs, and I've never seen the Dinah Shore!

Dinah Shore on Project 3 is a new one on me! Cool.

Thanks for the nice words, Diane.

Dear Lee,
Happy Thanksgiving to your followers and yourself. There is always something to be thankful for.
Bryan

This is true! Happy Thanksgiving to you, too!

11/22/21
RobGems,ca Wrote:
Hmmm...lots of Bobby Goldsboro haters on this blog. Goldsboro's one of those divisive artists from the 60's & 70's, you either love him or loathe him (it seems that many of the haters are male rock/pop critics.) He came from a time in the pre-British Invasion era when there were a lot (some say too many) pop singers were named "Bobby" (Vinton, Vee, Curtola, Rydell were all the rage in teen-aged heart throbs (though Vinton was arguably not a teenager at the time; he was already 29 years old by 1964.), so what was one more?) Yes, "Scotty" and "Honey" were two of his most syrupy songs, but he had some soul-pop singles from 1965-67 that surprisingly get popularity on the Northern Soul Collector's circuit ("It's too Late", "It Hurts Me", and "Take Your Love" for three examples gets attention; over at CKLW in Detroit/Windsor, Robin Seymour, Dave Schaffer, and the late Tom Shannon frequently played his discs, so he was particularly not avoided in the metro Detroit/Windsor area at the time. The late Rosalie Trombley, who just died this Wednesday (R.I.P.) a music consultant at CKLW (The first woman in Canada to have this position!) also took notice of Mr. Goldsboro, and frequently placed his discs in the US & Canadian Top 40. He wasn't a bad singer to me, he was perhaps overexposed for a time during the 60's & 70's. Incidentally, "Scotty" was composed by the late Mac Davis, and was really about his son, not Bobby's. (Bobby's son was named Danny.) Davis originally recorded "Scotty" for his first album on Columbia Records(1970's "Song Painter"), but Bobby quickly covered it and got the Top 40 hit with it.

Thanks for the data! Very interesting. Speaking for myself, I don't actually hate Goldsboro--in fact, I love the job he did on Burt Bacharach's highly un-PC "Me Japanese Boy, I Love You." I've always regarded Goldsboro as talented, since I never judge artists by their general sound/style. For instance, I never took much of a shine to John Denver, though he was obviously a very fine musician. Anyway, I recall liking Bobby when I was young.

Heck, I said I liked some of Goldsboro's stuff. I have a couple of his LPs in my basement.

11/27/21
RobGems.ca Wrote:
Whoops! I just looked through my bottomless vinyl record collection, and found out that Mac Davis recorded "Scotty" for his 1971 LP "I Believe In Music" album (his 2nd for Columbia Records), not "Song Painter". Sorry about that; when you have too many albums like I do, sometimes it's easy to forget which song appears on what album, I haven't exactly played "I Believe In Music" for some time, so I just plain forgot. As for "Me Japanese Boy", it will not fly today with some Asian Americans, true, since particularly Bobby Goldsboro himself is Jewish (at least the name "Goldsboro" sounds Jewish to me, though Bobby practices Christian values with his family.), but in 1964, it was considered a beautiful, delicate love ballad that made the Top 50 in USA & Canada. Burt Bacharach & Hal David did write this song (and probably with Bob Hilliard, though I'm not sure; I'll have to check the label credits) and it may sound un-P.C. today, but it's still a lovely ballad. Bobby is now 79 years old today, and sells paintings to his fans, and still occasionally sings. Oh by the way, it should be noticed that many of Bobby's recordings from the 1960's were recorded in Nashville, Tennessee, and sometimes featured Ray Stevens & Sandy Posey as backup singers; Ray's vocals can in particularly be heard doubling Bobby's on "It's Too Late", and Sandy's vocals can be heard in the background on "Little Things".

11/27/21
RobGems.ca Wrote:
Re: Buster: No hard feelings, Buster. It's okay to like or hate on Goldsboro's material; I was just pointing out that there a lot of particular amount of listeners out there in the music biz that outright hate Goldsboro's music, and not just "Honey" or "Scotty". Three prominent rock critics/reviewers from the 1970's who worked for Rolling Stone & Creem magazines (John Mendelson, Lester Bangs, and Detroit's very own Dave Marsh, as well as Rolling Stones founder Jann Wenner) hated Goldsboro's music with a passion, and always panned his albums. Another music reviewer who hates his music is U.K. music critic Dave Belloc, whop has his own blog "The World's Worst Records", and once featured Goldsboro on his blog lists. There was even a gag used on the TV series "Married With Children" when Peg Bundy annoyed Al Bundy with singing three songs he couldn't stand: "Dominique", "I Am Woman", and of course, "Honey". It just seems that a lot of people who can't stand Goldsboro are adult men, of course he'll always be an acquired taste for some; he can't be appealing for everybody after all, and that's understandable; I just happened to like his music.

11/27/21
RobGems.ca wrote:
Another big "Whoops!", that's Music critic Daryl W. Bullock, not Dave Belloc who runs "World's Worst Records", another sorry about that misprint; sometimes, it pays to check for the correct data.

You mentioned the problems had with copying the beach Boys sound. When ask by a Bashville newspaper reporter, Bobby Russell said the beach Boys was the hardest to sound like because of the harmonies and expert musicianship.

Thanks! That would have been my guess.