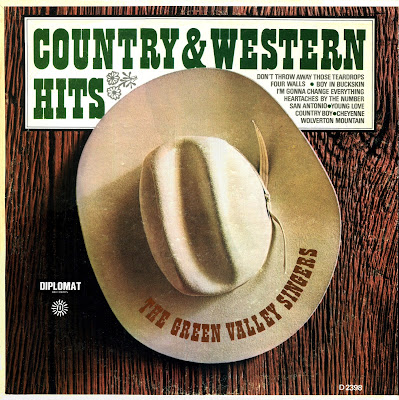 This turned up on a recent thrift trip, and I was a little dismayed when my Stanton 500 failed to coax good sound from these grooves, even when I employed my wider, 1.5 mil needle.  As a last resort, I tried my light-tracking stylus and cart, and... bingo.  Acceptable audio.  Now, all I had to do was widen the spindle hole so I could properly position the off-center pressing.  (The majority of turntables, unfortunately, fail to employ the genius innovation of those old Dual tables: a removable spindle.)  So, I used one of these: 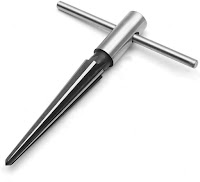 Very handy tool for widening spindle holes.  It did the trick, and thus the LP was saved from a trip to the Failed Thrift Find File, also known as my bedroom wastebasket.
So, we have to wonder, does Country & Western Hits deliver on the promise of the title?  Well, it depends on how technical we choose to be.  Because, yes, the playlist does contain country hits, but we're only talking four out of the ten tracks--though forty percent isn't bad for SPC, I don't suppose.  The genuine county fakes (genuine fakes?) consist of Wolverton Mountain, a huge 1962 hit for Claude King, Young Love, a big hit for Sonny James and a number of other folks, including (gag!) Donny Osmond in 1973 (Despite that awful 1973 memory, I like the number), Four Walls, a huge hit for Jim Reeves, and always nice to hear in any halfway competent version, plus Heartaches by the Number, a country hit for Ray Price, and a monster pop hit for Guy Mitchell (maybe my favorite Mitchell record).  And... that's it.  Those are the four actual country hits.
The other six?  A very amusing Willie Francis reggae number (!) called I'm Going to Change Everything, which may or may not have been covered by a country artist or two, though I've found no evidence one way or the next.  (Correction: With the slight title change, I'm Gonna Change Everything, this was recorded by Jim Reeves and Dean Martin.  Oops!  Thank you, Anonymous.)  Plus, Cheyenne (aka, Shy Ann) and San Antonio, both of them early-1900s novelty hits by Harry Williams and Egbert Van Alystyne (the former recorded in 1906 by Billy Murray), which are probably here only because of their P.D. status.  Also, a Frankie Avalon number, Don't Throw Away Those Teardrops, which sounds more or less like country in treatment, though the actual title is Don't Throw Away All Those Teardrops.  Then we have J. Fred Coots' (!) Boy in Buckskin , which was a standard SPC/Premier Albums, Inc. budget filler track.  It has a nice Mitch-Miller-chorus feel to it, and composer Coots is the man who gave us Santa Claus Is Coming to Town, so it's kind of nice to have.  Lastly, there is Country Boy, a 1960 hit for Fats Domino that SPC must have tossed in because it has "country" in the title.
So, we get four (correction: five!) fake-hit country sides and six  five fake country numbers.  All part of what SPC calls "the best in recorded entertainment."  Well, it was entitled to its own self-estimation.

A fun budget rip-off, and I'm happy I was able to sound-save it.  As for the Green Valley Singers, there was no such outfit, of course.  Had there been, we might expect them to perform "Good Things in the Garden" (the Jolly Green Giant jingle).

Or they could have done the rock version of the Jolly Green Giant tune by the proto-garage band The Kingmen! ("He ain't no prize / And there's no women his size / And that's why the cat's so mean.")

I do love Sonny James and Ray Price, and I thought that "Wolverton Mountain" song was the countriest thing my suburban ears had ever heard when I was 13.

I just wonder why I never got to know "Wolverton" as an oldie prior to encountering it as a fake on SPC (on one of the "Hits a Poppin'" or "Top Hits" LPs). And I love that Kingsmen side--it's delightfully inane, in an innocent way. Back before rock took itself too seriously.

Somewhere on one of my Christmas shares, there's a record by the actor who performed as The Jolly Green Giant in some of the commercials. That's all I got here...

Lee - "Wolverton" was a hit around here. It could be that you were a little too young to remember it now. There was even an "answer song" of sorts, "The Girl from Wolverton Mountain" by Jo Ann Cambelll.

You mean voice-performed, right? A while back, I put up a fake-hits 78 featuring the composer of the jingle, Bernie Saber. Fred Waring did a promo 78 of that song, though I don't have it. (Not to be confused with the Kingsmen novelty of 1964, which charted in 1965...)

Thank you! I got sidetracked when I Googled the song and came up with Willie Francis' "I'm Going to..." And so I didn't check out "I'm Gonna..." though I did come across a YouTube video of Dean Martin doing the song. Sometimes a single word throws off a search. And it's right there on the LP track listing--"Gonna." Oops.

I was definitely too young. I was just wondering why I hadn't known it as an oldie until I heard the SPC fake version. I'd heard of the follow-up, though I don't think I've actually listened to it. Next stop: YouTube. Thanks.

Where did you get your spindle-redefining tool?

Not the voice actor, the actual actor before he became animated. https://en.wikipedia.org/wiki/Keith_R._Wegeman

Cool! I'd remembered that as an animated figure, but my memories aren't always that reliable.

It's a taper reamer, and I think I got mine from Amazon. It's available from a lot of outlets. I used to have an antique version, complete with a screwdriver-style handle (a gift from my tool-collecting foster father), but somehow that one got lost. Anyway, just Google "tapered reamer."

I had a record player once that had a removable spindle, but I'm sure it wasn't a Dual. It was a direct drive unit, but also allowed you to change the spindle so that it would auto-change the records. I usually left the regular short stubby spindle in place, but I do remember pulling it out once so I could center up an off-center LP. Luckily, most of the off-center records I find are 45s, so I just pull out the adapter and put a weight on the record to keep it from moving when I manage to center it up.

Hi Lee, Finally listened to this collection while cleaning my friends kitchen. Really interesting indeed. But, they must have owed the guys doing track 10 something. Or these guys had something on the people making this record. Either way, I am sure they could have found someone better to record it, or found a better track to include on the LP. Sort of down grades a nice LP.

Okay, I will not name it, but the new OS I have downloads the different mp3 files super fast compared to the old one. I really like it, plus all that goes with the new looks for it. Plus I am using their Zip opener compared to the 7-Zip app. Currently I am on my 2nd version of this new OS that I have installed. Hint: This OS takes time to get use to and figure out. Plus, I am using Edge almost 99% of the time now and love it. No wonder why Edge is getting such good/great reviews. But, Google translate is currently better.