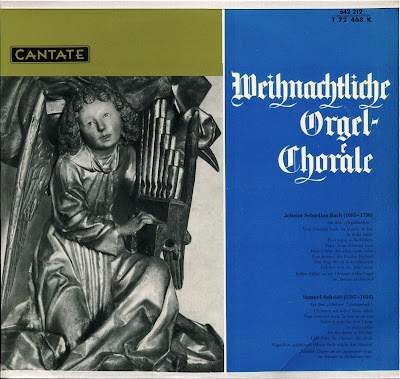 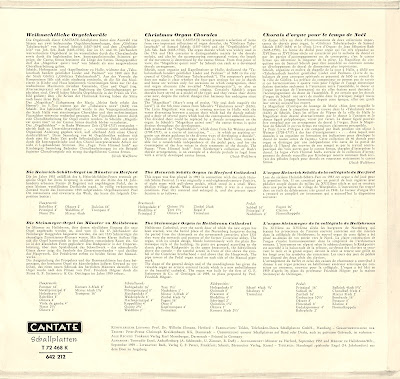 After a little searching, I found the entry for this LP at Discogs, where the A and B sides are flipped.  The entry uses "T 72 468 K" as the catalog number, though in every place except the back jacket, the main number is "642 212."  None of which matters, but I thought I'd mention it.  Discogs gives no date, but Side A appears to have been recorded in 1959, and Side B in 1957.  The years are given along with the recording locations ("aufnahmeort").

I hope I did a decent German-to-English job.  "Münster" wouldn't come up as anything at any of the translation sites I visited (one even referred me to the TV show!), but Amazon came to the rescue--"cathedral" is what it means, apparently.  I'm going with that translation, anyway.  "Munster" is also an area in Germany, but the jacket credits appear to be referring to organs located in specific churches.  I somehow forgot I had this gem--I bought it from eBay several years back, and I rediscovered it last night while searching through my 10-inchers.  These are Christmas organ chorales by Samuel Scheidt and J.S. Bach, based on melodies like In Dulci Jubilo and Martin Luther's Vom Himmel hoch (the only two I recognize!).  In church, I've used both Scheidt settings (he did several using Vom Himmel hoch), and I'm happy to find that my tempo choice for In Dulci Jubilo was close to the correct one, going by this LP.  The "rules" for four-part harmony were still evolving when Scheidt, who lived about a century before J.S. Bach, wrote the two collections from which his Christmas chorales were taken--the Görlitzer Tabulaturbuch of 1650 (handy source for short offertories) and the Tabulatura nova (1624).

The second Scheidt track, Magnificat (Mary's song of praise) comes from the 1624 book, and it's in the "5th tone"--i.e., the fifth psalm tone (a recitation melody for the singing of a complete Psalm), of which there are eight, and which correspond to the eight Gregorian modes.  Since I'm mostly unfamiliar with how chant melodies work, that's all I can tell you.  Well, except that the fifth Gregorian/church mode is Lydian mode, which is basically a major scale with the fourth raised a semitone.  This creates a tritone between the first and fourth notes, and I'm guessing that, back in the day, there would have been a general desire to change the augmented fourth to a perfect fourth, whereupon you have the modern Major scale (Ionian mode).  The cantus firmus (fancy name for the main melody) in Schedit's Magnificat sounds Major-scale, so I suspect we're hearing altered Lydian.  (Great name for a rock band, if no one's used it yet.)  The liner notes talk about "the radical changes that harmony has undergone" since Scheidt's time, but I find that most folks don't hear anything too weird in his chorale chords.  At the start of the Scheidt side, things initially sounded like Erik Satie's Messe des pauvres, but I quickly adjusted to Scheidt's way with SATB harmony.  For anyone trained to expect "proper" progressions, there are incorrect chords here and there, but that's part of what makes Schedit so fun.  That, plus his major-league genius.  I discovered Scheidt around 1990, when I was looking for fairly simple but high-quality short chorales to use for offertories--things I could play on the manuals, since I'm what they call a "Sunday organist" (a pianist at the organ), and Scheidt's chorales were a gift from above.  I recognized right away that he was a major figure.  It shows up in every note.

Bach's Christmas selections are, of course, flawless.  Perfect.  Everything by Bach is flawless and perfect.  Faultless, even.  I recognize only Vom Himmel hoch on the Bach side, and in case you don't know that Luther tune, here it is.  Yes, its ending does sound like Luther's other big hit, A Mighty Fortress...

Anyway, what Christmas is complete without Weihnachtliche Orgel-Chorale?  I wish this had been an all-Scheidt affair, but I'm just glad to have selections from his Görlitzer Tabulaturbuch on an LP. 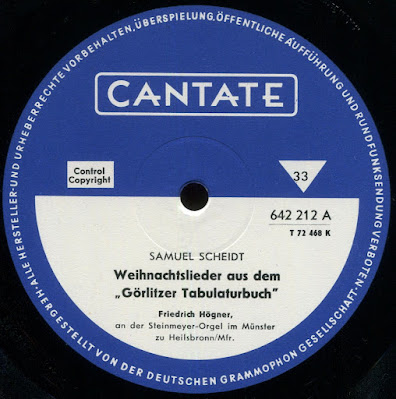 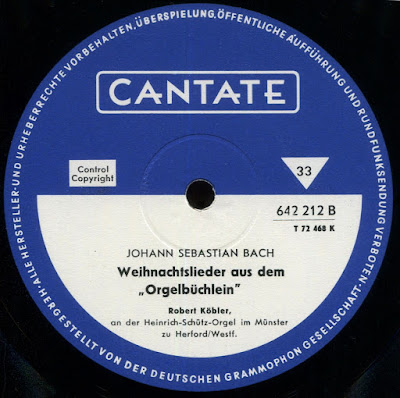 Thanks for this, it's very welcome!

I looked these up in the Classical Discography, which was no help. in one listing it gives the date of the Bach recording as 195?. In another it dates the Cantate LP to 1961, probably the publishing date rather than the recording date.

Thanks. And I just noticed that the English portion of the liner notes translates "münster" as "cathedral," just like Amazon. All I had to do was look down one row.

I Have another 10-inch issue on that label from 1960 (it's even a two-record set), so that was apparently something that Cantate liked to do.

Interesting. Can you compare catalog numbers? That's something I should do with Discog's Cantate entries, wherever a year is given.

Here is the record I have, per A Classical Discography. It is earlier than I thought (1958):

Bach is about the only organ music I can tolerate, and this side is indeed wonderful. Thank you very much.

Yes, that could definitely put mine at 1959. Thanks!

Glad you enjoyed! Hope you gave Samuel Scheidt a chance... He was one of those great innovators who never became a star, so to speak. The stars are often not the innovators; typically, they're simply the best of the bunch, as opposed to the folks who got there first.

It's not Christmas without some organ music!