More Christmas singles on the way. No, wait--they're already here. 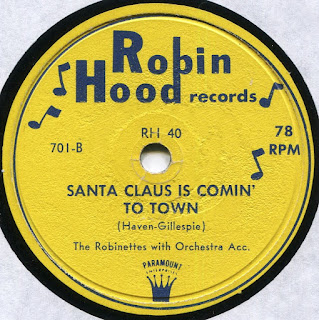 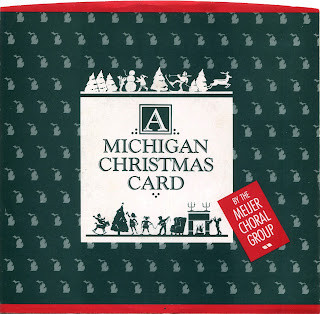 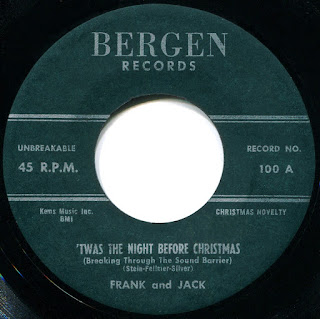 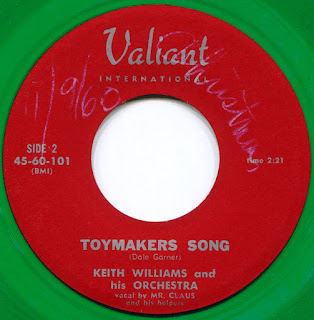 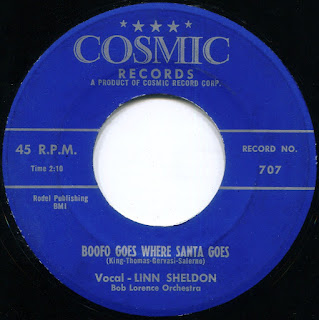 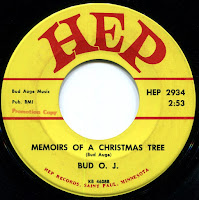 You know it's going to be great Christmas playlist when the first track is called Memoirs of a Christmas Tree.  This narrated number is literally that--an account of the Christmas experience from the perspective of the tree.  Who would have thought to consider the holiday from the tree's fir-specitve?  Well, "Bud O.J.," for one, whose real name is Bud Auge.  The Hep label, determined to keep things unconventional, coupled Bud's number with Christmas in Heaven, a title which someone just had to lay down on wax at some point--it was inevitable.  Red Harper is the singer, and Howard Pine was the writer.  In fact, that was was even more inevitable than I realized--a quick Google check brings up a number of Christmas in Heavens.  You're probably thinking CIH is about some crazed snowman who takes over Santa Claus Land and makes it winter all year round, just so he never melts--but it's actually about, well, Christmas in Heaven.  A dream thereof.  Discogs says 1966 for the year, but two other sources say 1964, and I'm going with them.  So, what can I possibly offer as a follow-up to these two gems?  Well, I found 25 more singles sides (single sides?)--some "new," some old favorites, and the rest stuff that expired at Zippfile.  None manage to be as delightfully weird as our two opening tracks, though a few try.

Dick Byron's Jingle Bells, backed with Deck the Halls/Up on the Housetop, is one of the first Christmas sides I ever featured--maybe all the way back in 2005.  I recall that getting a good rip was a challenge with my 2005 set-up, which included a Dual 1229 turntable, but the only challenge this time was splicing out the clicks from the big crosscut on Side B.  I really love this rendition of Bells--I'd put it in my Top Five.  And it can't be pointed out often enough that Deck the Halls is actually Deck the Hall (singular).  Get with it, people. 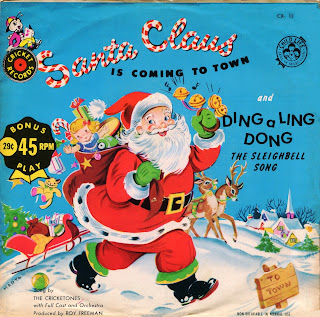 Of course, when you have a terrific 45 rpm picture sleeve, and the responsible party is Pickwick, you just know the music is going to be lousy.  And "The Cricket Choral Group"'s Santa Claus Is Coming...is pure junk-label cheapness, with recorded-in-a-broom-closet fidelity.  I have no idea who the actual artist--a country singer--could possibly be, and I doubt Gene Autry ever sounded quite this inadequate.  The flip side, Ding-A-Ling Dong, is pretty charming, however. Cricket elected to master it at a much lower volume, just to remind you to never expect a quality product when they're the folks demanding your money.  And I had to add lots of treble to SC Is Coming to unmuffle it.  Ahhhh, Pickwick.

Then we get the Music City Chorale, courtesy of Holiday Hits, a Hit Records sub-label, with Hit Label's own Bob (Little Green Apples) Russell leading the group on (oh, no--not again) Santa Claus Is Coming to Town.  I did a label scan, but only then did I realize how awful the labels look--something slipped during the printing process, I guess.  (That, or my glasses need to be switched out.)

Then, who but the Meijer Choral Group, with A Michigan Christmas Card?  Who, I ask you?  The K-Mart Choraliers?  (Hm.  Actually, it's Kmart.  Sorry.)  Now, we do hear something like a choral group on the A side, but the B side is an instrumental--yet the Choral Group is credited there, also.  Double royalties?  Very well-produced side (from 1985), and pretty pleasant.  I was expecting something painful, so I was very relieved.  The sleeve is classic, as you can see (in the top row).  And it has a sing-along reverse sleeve: 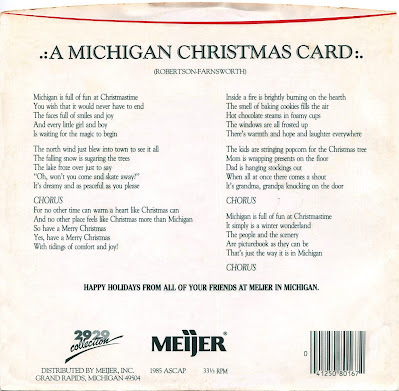 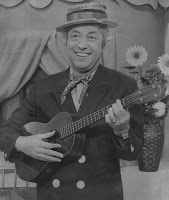 I do not know who the Robinettes were, besides Robin Hood Records' default "house" singers, or whatever they're called--they're good, and the record really swings.  It has a genuine big band sound--nothing "neo" about it.  The best file I've ever gotten from this seven-inch vinyl 78.  Probably had a pic sleeve, though my disc came by itself.  Linn Sheldon ("Barnaby," left) was a famous TV children's host in Cleveland, who my sister remembers tuning in--I never caught him on the tube, but you can just tell he had just the exact right touch.  Both of his 1958 sides--Boofo Goes Where Santa Goes and Rabbits Have a Christmas--are delightful and beautifully done.  Novelties for all ages.

From 1951, Lawrence Joy gives us a square dance rendition of Jingle Bells, something that, if we're honest with ourselves, we all need.  Toymakers Song, which may or may not be from 1960 (someone wrote "1960" all over the label, which is why I'm thinking 1960), is a terrific novelty polka number (is "novelty polka" redundant?), while 1980's Where Is Captivity? (Bring Them Home for Christmas) is... ummm... yeah.  It's about the Iran hostage crisis, of course, and it's what I would term "campus folk" Christian music, though there must be a more elegant term.  Sorry for the surface noise--this is an old rip.  I don't know what to say about the lyrics-- maybe I would, if I could decipher more of them.  The chorus certainly (and unfortunately) comes through loud and clear: "Won't you bring them home?  All the world sings, 'Bring them home.'  50 stars are in our tree.  Stockings full of wishes; Bring them home for Christmas."  Be the only person on your block who has this 1980 file.

Discogs has this to say about Frank and Jack, the guys behind the 1956 'Twas the Night Beore Christmas (Breaking Through the Sound Barrier) and its flip:      .  That's right--absolutely nothing, which is the perfect review for these two "break-in" sides.  I imagine they're of interest to fans of interpolated sound effects (or of vintage tape-splicing), but they're simply not remotely funny.  Feel free to disagree, but I find them aggressively dumb.  And not funny-dumb, like Dickie Goodman.  I hope Santa isn't a Frank and Jack fan, or I might get a bag of coal on the 25th.

The two 1950 Art Mooney sides--The Christmas Choo Choo Train and The Candy Land Parade--are making a return appearance here, after a number of years, I believe.  Both sound like budget kiddie numbers--if the budget labels had had MGM's resources.  Story of a Christmas Tree is no Memoirs--just your typical pre-A Charlie Brown Christmas story of the misfit tree that makes good.  An old theme in children's stories--often, the tree is little (as in the Scultz cartoon) but wins the day, anyway.  An obvious metaphor for the worth of children.  Randi the Handi Elf is a harmless country novelty whose title is sure to amuse middle schoolers.

Merry Christmas (To All the Little Children) is a charming and energetic ditty by Samuel Wright, assisted by the Little Jingle Singers.  Here's Samuel's Discogs bio.  Produced by Phil Medley, even!

Wow! What a haul! You've been busy! Thanks for sharing all these sides, Lee, it looks like a great collection. And I didn't know there was a Christmas song about the Iran Hostage Crisis. All I remember was a ripoff of Barbara Ann called Bomb Iran, and it certainly wasn't Christmas...

Thanks for this uniqe share of christmas singles! The Art Mooney / Laura Leslie-tunes were my instant favorites among these (+ The Robinettes & The Cricketones).

Ah, Linn Sheldon, I remember him well: one of the many Cleveland kiddie hosts. The odd thing is that I don't remember hearing the Buffo song at all in my youth, although I acquired the record myself sometime in my extended adulthood. I've never seen a picture sleeve for it.

I have two versions of "Bomb Iran"! And you're right--not a Christmas side at all. Hope you enjoy these!

I love your Google name! Yes, I'm fond of the Mooney sides, too--they're very well done, and Laura Leslie had a fine voice. I just now looked her up, and it seems she sang with Sammy Kaye and did duets with Don Cornell before going on her own. I also love the Robinettes side, and "Ding-a-Ling Dong" has been an earworm selection since I first heard it years ago. Thanks for commenting!

It's possible it didn't have a pic cover, but it seems like a prime candidate for one. I wish I'd seen Linn Sheldon on TV--I love his goofy and warm manner, and those sides are unusually well done for their type. They work very well as novelties, even apart from their function as kiddie show tie-ins.

Lee - Sheldon's manner was somewhat like Mr. Rogers, although he adopted an elfin identity called "Barnaby."

Funny, one of the stories in the 1959 Line Material book is from the perspective of the Christmas tree. So I guess that was a thing...

Must be a Christmas folk motif. There are probably variants on it. I can't remember what it was called, but in folklore class, we had to look up folk-narrative types in a big book--numbers were assigned to the main stories, and each variant was classified. Someone could do that with Christmas themes.