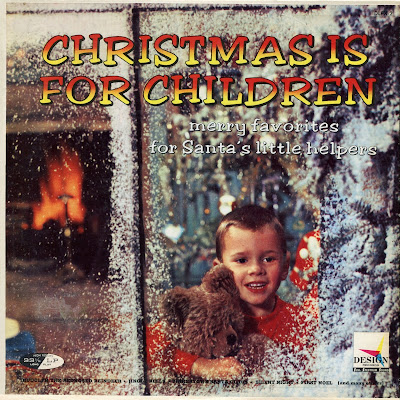 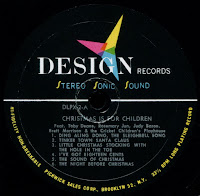 I thrifted this during my three day internet-withdrawal period, and I apparently got a great deal at 99 cents--it's at Discogs in Poor condition for $56.00 (Can the dealer be serious?), and it doesn't show up at all on eBay.  My copy has some moisture damage to the back jacket but is otherwise fine.  Such a tacky-cool cover photo, and if the copyright year shown on the back cover is the year of release, then this is from 1957 (Design's first year).  This is quite possible, since the label is in the earliest style, complete with the promise of "Stereo Sonic Sound," which this disc does not deliver--the tracks are all mono.  Stereo didn't happen at Design until the early 1960s, apparently, but I guess Pickwick Sales Corp. figured no one would sue.  I can picture a Design engineer saying to the label makers, "Anyone who buys this junk isn't going to know what stereo is.  So, don't worry."  Label makers: "But you guys are liable if someone gripes, right?  Right?  Right?  Hello?" 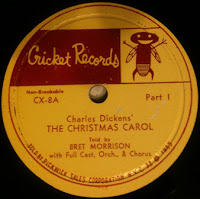 The tracks, all released as singles or EP tracks on Pickwick's Cricket and Playhour labels (and who knows where else), date back to 1953 or earlier (I suspect A Christmas Carol is pre-1953), and I'll have to say they're well performed and produced--surprisingly so, given that 1) they're from the early 1950s and 2) products of Pickwick.  I've always had a less than glowing opinion of Pickwick's kiddie stuff (Cricket, Playhour, Happy Time), but maybe that's because of the highly uneven quality of the pressings, plus the fact that Pickwick re-re-re-reissued its tracks in greater numbers than SPC and Waldorf combined.  But hearing these tracks all packed into a single album has me reevaluating the Pickwick kiddie line.  I suppose these could be considerably worse.  The singers are good, the super-condensed version of A Christmas Carol is fun and nicely spooky (it's like a Classics Illustrated version of a Classics Illustrated version), and Ding Aling Dong, The Sleighbell Song (aka, Ding-A-Ling Dong, The Sleigh Bell Song) remains one of my favorite cheap kiddie holiday numbers.  Plus, we get the ad-jingle-sounding Tinker Town Santa Claus, which I first heard in its 1970s Playhour Records edition, and I've Got Eighteen Cents, an annoying number sung by Rosemary Jun (1928-2016), whose real name was Rose Marie Jun, and who can't be blamed, since she didn't pen the thing.  Rose Marie, aka Rosemary, is credited on the back jacket, along with the Cricketones, Toby Deane, Norman Rose, and Linnea Holm, and the label lists the Cricket Children's Playhouse (which doesn't seem to have existed) and one Brett Morrison, who was actually Bret Morrison (1912-1978), and who, among others, played The Shadow on the radio. 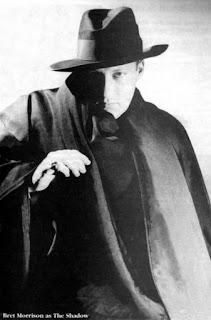 Here's Brett (left).  Pickwick's children's labels had a weird habit of referring to singers as "casts," as in "Performed with full cast and orchestra."  And its "cast" credits weren't consistent, either--sometimes, they varied between sleeve and label, and (far as I can tell) from issue to issue.  But Pickwick wasn't trying for anything near the orbit of perfection, so we can forgive them for screwing things up on a regular basis.  I mean, do we have a choice?  Five of the Christmas Is for Children selections are traditional, if we include Jingle Bells (a pop song, really) under "traditional."  Four of the five are sung by the St. Margaret's All Boys Choir, who might be the group doubling as "Santa's Friends" on Jingle Bells, and these tracks are a nice break from some of the over-cuteness which precedes them, such as Little Christmas Stocking with the Hole in the Toe (aka Just Come up with a Title So We Can Get Out of Here), and the Eighteen Cents song, which, again, I'm sure was merely another gig for Rose Marie Jun, and not something we can pin on her in any way.  In all, the perfect cheap collection.  If you don't believe me, ask Roy Freeman, Director of Artists and Repertoire (Pickwick had one of those??): "Here is as fine a group of gay holiday songs as you'll find under any musical Christmas tree...All of the favorites for Santa's little helpers."  And I can so picture 1957 children yelling, "We want Tinker Town Santa Claus--and I've Got 18 Cents!"
"Many, many happy Yuletide hours are the promise and offering of this gala Christmas package...and may we warn you in advance...BE SURE..OPEN BEFORE CHRISTMAS..."  Oops.  Guess we're a little late.  Well, not if we're going by the Julian calendar, in which case Christmas isn't until January 7.  My edition must be missing some material, since it clocks in at about 37 minutes, not "many, many happy Yuletide hours." Curious.  Maybe everyone was drunk.  Wow, this album even had a program and technical consultant.  And it's a CP LP.  "CP is Design's designation of controlled production."  You can read all about it on the back jacket scan.  I'm just overwhelmed by how much effort they put into this collection of previously released singles, to say nothing of the number of folks involved.  Oh, and I stand corrected--apparently, we're getting "the complete Dicken's 'A Christmas Carol.'"  Somehow, I don't remember it being so brief.  And I thought the author was Charles Dickens, not Dicken.
Anyway, have a happy Pickwick New Year! 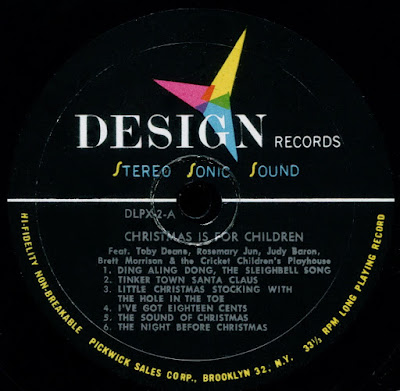 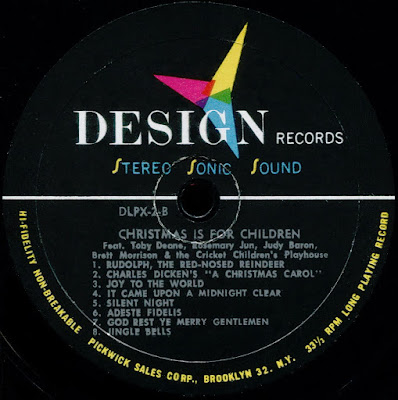 Hi Lee, Thanks for this post. I enjoy listening to selected children's records. Really never heard them as a child, I think I was too grown-up for "children" programming as I grew up. As an adult, I am enjoying my childhood now. Bryan

Thanks, Lee! And Happy New Year! People on Discogs sometimes cater to the sentimental buyer who just got a record player and remembers this one from their youth. Maybe they've shrink wrapped it so it looks new. Then they hold onto it for a decade before a sucker comes along to pay that price...

Wow, Lee, I have never seen this one, and you know how crazy for Christmas records I am. Congrats! And many thanks. Happy New Year, too!

can we get a re-up on this album Lee?

I just replaced the link--it's working now. A number of my links were lost this year when Workupload temporarily crashed--this, apparently, was one of them. But it's back--enjoy!