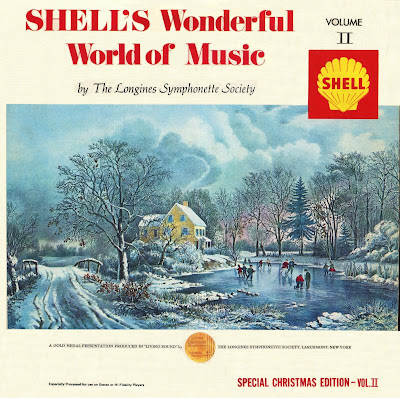 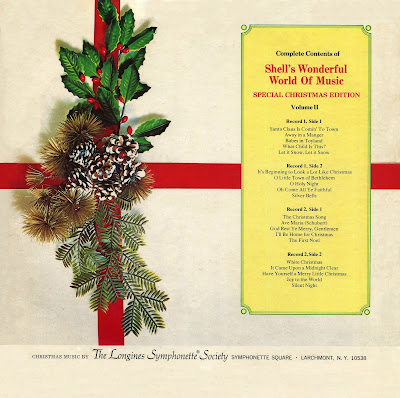 The Discogs entry for this set is unusually well detailed (the cover and labels are filled with errors), but... alas, no identification of the singers.  (Unless my eyes skipped that data.)  And I have no idea who the vocalists are, either, though they are on a professional par with Johnny Mann's and Ray Charles'.  I.e., the Ray Charles who is also known as "not THE Ray Charles."  Forgive the short essay--I've got some kind of intestinal bug that has a respiratory component, but my body seems to be fighting it off with no problem.  Still, winter weather is here, and this room is pretty cold as I speak/type.  I need some insulation strips for the windows.  As snugly as they shut, I still suspect outside is sneaking in.

This room dates back to 1850 or so.  This house was originally a two-story farmhouse, with the upstairs accessible by an opening in the ceiling and a ladder.  Bev maintained that this room (my Media Room, with a sloped ceiling that limits my storage space!) and the downstairs were the first rooms built, but our house painter, an expert on such things, studied the foundation and determined that the living room and the room above it were the first.  That makes more sense, since they face the road.  Two barns stood on this property long ago.  One was still standing when John and Bev moved here in 1971 (the year of today's offering!), and they had to have it torn down, as people were holding parties in it, and they were afraid of a fire there.  They were less concerned about the trespassing aspect, I guess.

None of which relates to this LP.  All of the good ol' holiday favorites, and beautifully recorded and performed.  Enjoy!  And I'll attempt to feel less flu-ish.  I figure this bug will hang around for a few more days.  I hope it realizes that it's doomed. 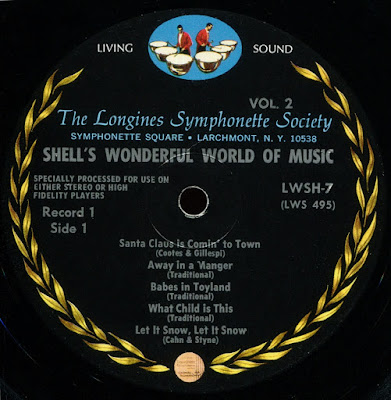 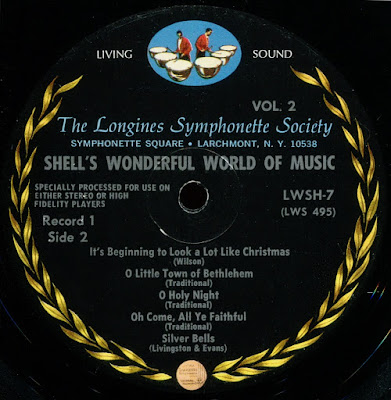 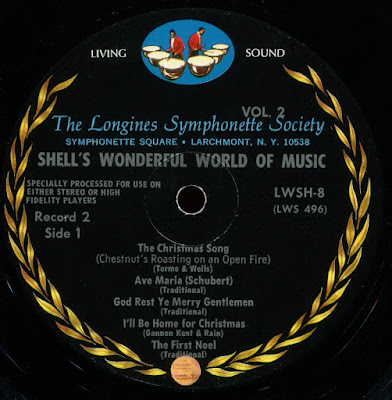 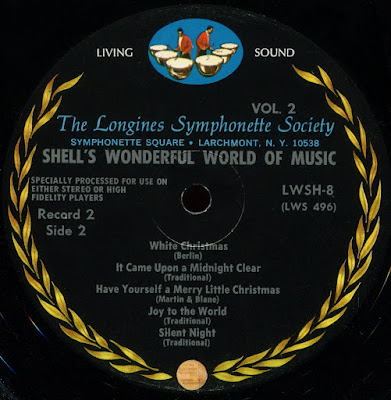 Posted by Lee Hartsfeld at 4:35 PM

I see this record was specially processed for mono and/or stereo. That seems a little odd for 1971, but I guess their target market was still holding onto that old playback equipment. :)

Hi Lee, thanks for posting this. As mentioned in an earlier comment I grew up in a household that had maybe 10 LPs. Two were Christmas Department Store Promotion LPs? A Columbia and an RCA LP. As a kid, when I found we had them, I remember the high quality of these records. 10-12 different artists from their Record catalog of artists. Maybe, they spent extra time and energy on these packages because where they were to be sold as promotions. The Longines Symphonette seems top-notch too. But I seem to remember my parents liked Shell gas as a favorite, the other being 76. I have the mp3 1970 Shell release. Not sure where I got it. Probably from Ernie's blog? He has some good selections this year too. Bryan

Thank you very much for this album...lovey arrangements indeed!

They repackaged these tunes for a lot of different corporate giveaways and such. A lot of these tracks can be found on "Avon Wishes You a Happy Holiday" (with the cut paper cover). Silent Night shows up on the LP "The Sweet Voices of Christmas" (with a children's choir).

These releases made a brief appearance on CD way back in the day from an outlet called "Yestersounds". They had a two-CD collection that I believe reproduced tracks from the box set "Christmas at the Fireside". It came with a bonus CD of the Sweet Voices of Christmas album. I was lucky to purchase a copy when they were available. They sound pretty great.

There was also a series of budget CDs back in the 90s that were credited to "The Symphonette Society". I believe they pulled lots of tracks from the Longines recordings. I only ever got one of them and it has a few of these tracks plus some others from sources I don't know.

Yeah, I figured LS did the usual juggling of tracks--I was afraid that this might turn out to be a reissue in whole--just a previous release, retitled. I suppose they dispensed with track credits so that people wouldn't realize they were re-re-cycling things. I'm sure the masters sounded great, so I can believe the CDs sound awesome. Thanks for i.d.'ing some of the tracks.

For now, we'll just have to pretend the artists are "The Longines Symphonette Society." Very versatile group!

I have a copy of vol 1, not certain where I picked it up but a lot of the same tracks on vol 1, your bitrate is much superior though and I thank you for that as these really are well done versions of the classics - well done sir

Thanks! And that's interesting--LS actually repeated numbers from Vol. 1 to Vol. 2. Well, that definitely sounds like them! Glad this is a better rip than the one you have.

Thanks, everyone, for the nice words. Bryan, I don't think Ernie shared out any of the Shell releases, but I could be wrong. (That happens occasionally.) I'm not an authority on the various Columbia Special Products and RCA comps, but I believe they commissioned special tracks for them, which means they put significant dough into them. Naturally, I never post those things--too risky. This collection is especially relaxing and expertly done--glad people are digging it!

Lee, For a man under the weather, you gave us (well, me) a fun and interesting history of your dwellings. Thanks! Hope you're feeling better, lest you become a "shell" of a man. Which reminds me, thanks for the great record. Doc

Adding to Ernie's comment about 1971 being a little late to mention mono equipment, I have the release date for this set at 1967, with Vol. I as 1966 and Vol. III as 1968. Which, of course, could be totally wrong, given how Longines was famously stingy with information. Does anyone have confirmation of release dates (besides Discogs.com)?

Sure! And I'm still battling the bug, though I suspect it's almost run its course. I feel woozy today, which puts me out of the mood to blog. It's a feeling akin to car sickness (aka, motion sickness). I asked my doctor (by phone) why I'd be feeling an intentional ailment in my sinuses, and he said the symptoms of such a bug are typically felt throughout the body. Medical things always work on a domino-effect principle, it seems. Glad you enjoyed this comp, and thanks for your Kay Kyser comments at "Praise the Lord...." I see we agree on the musical worth of that band. At one point, I'd read only negative reviews of Kyser, so it was a very pleasant surprise to discover the orchestra had such "crack" musicianship, to use an old term.

And, Ernie (I forgot to respond to your stereo/mono comment!), I have to wonder if stereo/mono compatibility presumed that the customer had a stereo cartridge, even if he or she was listening in mono. Because a mono cartridge, being unfriendly to the vertical aspect of the groove, would have torn this thing up, I'm sure...

That's interesting! And of course I was going by Discogs' info. What is your source for the 1968 year? (I'm not expressing skepticism--just curious.)

Wow! I have another one in this series, Wonderful World of Music - Special Christmas Edition (the one where Greedo shoots first maybe?). I never knew there were more than one. :)

See? This is a very educational blog. (-: I'm just wondering if Discog's year assignment (1971) is indeed off by three years. Not that it's big deal, but this hobby is less fun if we're not sweating the little details!

I just love these promo LPs, and I've managed to collect whole series of them -- Goodyear, Firestone, Goodrich, Grants, Penneys, Shell, Phillips 66, A&P, etc. You're right, the music is usually first-rate. But many of the songs seem to be "borrowed" from the artists' previous albums. Maybe some were just issued as singles, because I don't seem to find them anywhere else. At any rate, it's an endlessly fun subject, so thanks!

Lee,
I know I'm going a way back for this, but I just found this, just posted on Youtube, so it's kinda ironic, that this last comment (from Diane), mentions Goodyear LOL!

Again, Blessed Christmas, love and prayin' for ya!

Good morning
I wish you health from the bottom of my soul, and I would like to ask you if you have Shell's Wonderful World of Christmas, Vol. III, upload it
Thank you very much .
n0str0