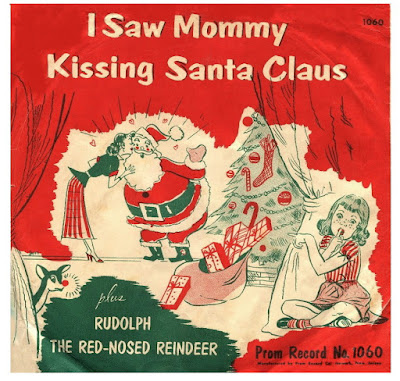 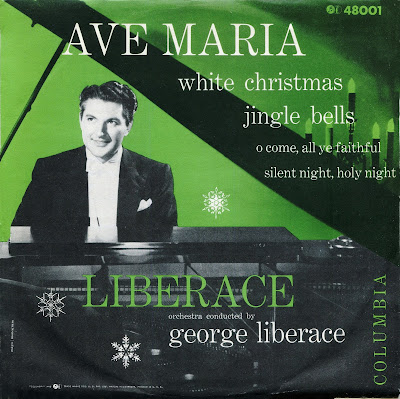 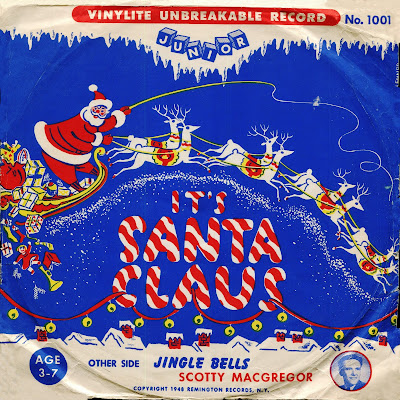 On the way, a longer post of Christmas 78s.  But first, here are three cool 78 rpm picture sleeves--and their records!  The record labels and sleeves, I scanned--the grooves, I ripped and uploaded.  Trying it the other way around didn't work so well...
Things start with I Saw Mommy Kissing Santa Claus, one of my not-favorite holiday standards, though Davey Piper sings well enough, and he has Enoch Light's orchestra and chorus behind him--and, best of all, he isn't Jimmy Boyd.  That's what makes this version so special, imo.  Bear with the rough opening grooves (someone must have pushed a '50s-era tonearm down on them--"Hey, genius--just let the tonearm ride.  You don't have to shove it down!").  I minimized the distortion by using my wider 78 stylus and eliminating the noisier channel (the right), then splicing in the repaired portion, and I got the opening sounding merely lousy, as opposed to dreadful.  But we're only talking 15 seconds or so--everything is smooth tracking after that.  And we don't have to listen to Jimmy Boyd!
The flip--Dolph Dixon's version of Rudolph the Red-Nosed Reindeer--is so familiar to my ears, I have to wonder on what previous ten cheap labels I've heard it.  This Prom 78 came out in 1953, but this version of Rudolph may very well date back to the year of Gene Autry's hit version: 1949.  The track might even predate the Prom label itself.  Some brave researcher needs to get on that, and right away.
Then, a MY(P)WHAE first--Liberace!  Took him long enough to make an appearance here.  A cool pic label (same photo on both sides), with Wladziu Valentino Liberace looking pretty handsome, actually.  By all reports, he was rather easy on female eyes, and here we have him dressed normally, even--a regular suit and white bowtie.  (I'm not sure I've ever seen a white bowtie before--at least, not white against white.)  I've read that everyday folks of the 1950s lacked gaydar, but I can't say for sure--Wladziu was ahead of my pop music time.  He gives us a nice two-fer of Ave Maria--the Schubert and Gounod/Bach melodies alternated for cool effect--and, on the flip, a very pleasant Christmas medley. I was expecting a more flamboyant single, but I'll take quiet and tasteful at Christmas.  No complaints.  George Liberace conducts.  I had a solo album of his at one time.
The sleeve for the Scotty McGregor It's Santa Claus and Jingle Bells specifies "Age 3-7," so I think we all qualify.  (I'm taking 3-7 as the minimum age range, so we're good.)  Cool 1948 art on this 1948 picture sleeve, and the Junior label was the Remington Records kiddie label, apparently.  True to Remington's lack of quality standards (the opposite of quality standards), everything initially sounded hopelessly muddy, even with the Remington recording curve preset in VinylStudio.  So I jacked up the treble, and the results aren't bad at all--in spots, things sound quite vivid.  I wonder if this is an early instance of magnetic tape mastering?  Lively, charming, old-fashioned numbers, and perfect for kids--and, no, I'm not going to add "...and for the young at heart."  I don't resort to such clichés as "...and for the young of heart."  That's why I have no intention of using the cliché phrase, "young at heart."  See how skillfully I avoided using it?
I hope to get my heapin' helpin' of 78s--all ripped from my overflowing collection--ready to go by tomorrow afternoon or evening.  Until then, Merry Almost-Christmas!
DOWNLOAD: Picture Sleeve Christmas! 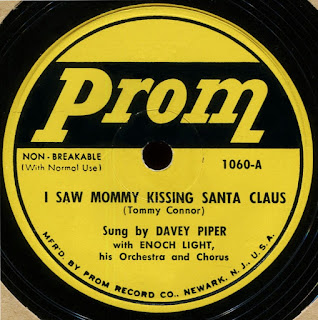 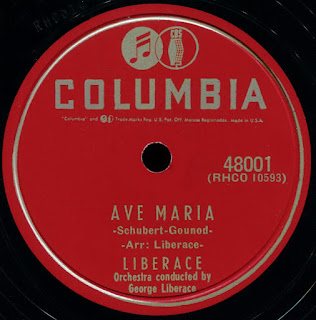 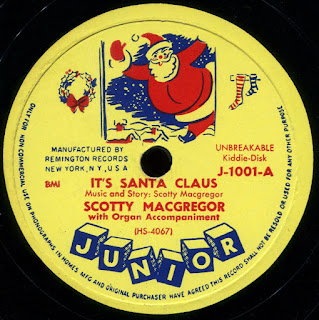 Lee
Posted by Lee Hartsfeld at 8:07 AM

Thanks for the these, Lee! I think I have that Liberace on 45 somewhere, with the same sleeve. His Christmas stuff is nice, Other than his recitation of Twas The Night Before Christmas, you might call it tasteful even. But that speaking voice...

I have that Jimmy Boyd version with a 78 picture sleeve, which is even more repulsive that the record.

Liberace's Christmas LP on Columbia has a great cover of him and Santa.

Sure! And I see that I put the Liberace up in 2018 in one of my "sackful of singles" posts. Small world... I don't know about you, but I have about a two-week memory span, at best, when it comes to what I've already posted vs. what I haven't. I might even repeat myself in a given season. It's not old age--I've always been spaced. I know what you mean about Liberace's speaking voice--ugh! I'm sure you've heard Spike Jones' masterful send-up of Liberace--"I'm in the Mood for Love"--which featured the ultra-talented midget comic-actor Billy Barty as Liberace. Apparently, Liberace loved Barty's imitation of him, which, for the band's stage shows, involved a tiny piano and Barty made up like Liberace. So, Liberace had a sense of humor...

Glad we agree on the original "I Saw Mommy..."! In this version, it's kind of a cute, kiddie sort of holiday song. Fairly clever, totally harmless. In Boyd's version, it's fit for Halloween. I've seen that Liberace-with-Santa cover a lot at the thrifts. Never picked up a copy, but...

Lee - Thanks for reminding me of that Billy Barty bit! Hysterical.

Barty said Liberace laughed his head off at the routine, so Liberace must have been okay. The guy certainly had guts, being so, um, unsubtle about his sexuality. No big deal today, but that's now, and that was then. (Hey, that was profound.)

Wladziu was ahead of my time, too, but ladies just a few years older have confessed to kid/teen crushes on him. I know from circa-'80s Johnny Mathis concerts that many female fans had no clue there, either, repeatedly rushing the stage with flowers. I loved Mathis' music, but had no illusions re his "romantic" suitability. And then there's Barry Manilow. It's that Mr. Spock syndrome -- not available, yet I know *I* could win him over! Right.