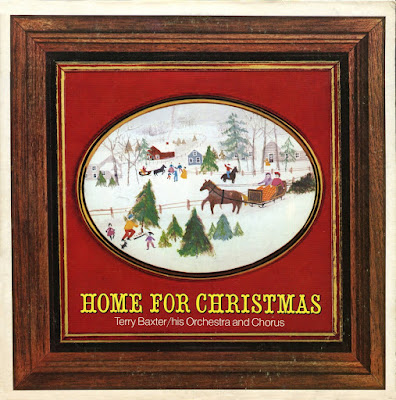 A Christmas without Terry Baxter is like... well, a Christmas without Terry Baxter. But, seriously, this Columbia House mail-order LP is a superior product--it touches all the musical bases, from Silver Bells to Some Children See Him to Rudolph to The Holy City to Hallelujah Chorus. I was expecting same-sounding tracks, but the arranging styles vary quite a lot, with tracks that recall Ray Conniff, Robert Shaw, Johnny Mann, and George Melachrino. I especially like White Christmas, which uses musical quotations almost to the point of comedy but is all the more fun because of them. Meanwhile, Rudolph sounds like a joint Henry Mancini/Floyd Cramer effort, and there's a beautiful brass version of The First Noel, though at one point it sounds like an organ has joined in, creating a serious mismatch in resonance. I still like it. The Holy City is a standout, too, with an elaborate, George Martin-esque sound. Silver Bells receives a sort of bluesy treatment--Ray Charles Lite. I love the ways the styles bounce around.

These imaginative settings have me appreciating titles I don't usually dig.  Exception: Do You Hear What I Hear, a number which (to my ears) nothing can save.  Apologies to fans of that song, but I can live without it.  And if Terry Baxter can't sell it to me, no one can.

Everything is expertly done, of course. Well, nearly everything--the piano-dominated instrumentals are pretty tacky compared to the rest of the LP, and they contain enough keyboard bloopers to warrant retakes. Maybe these were rushed to meet a deadline. But the rest of Home for Christmas is top-notch in the musicianship department. A much better LP than I would have expected from Columbia House. (That'll teach me.)  One of the funnest Xmas offerings so far this year.  It originally made its appearance at the blog in 2018, but the Zippyfile link went bye-bye ages ago--plus, this is in a higher bitrate than before.

White Christmas
The Little Drummer Boy
The First Noel
Rudolph, the Red-Nosed Reindeer
Joseph Dearest, Joseph Mine
When Christmas Comes
The Holy City
Do You Hear What I Hear?
Joy to the World
Angels We Have Heard on High
Silver Bells
Some Children See Him
Santa Claus Is Coming to Town
O Come, O Come, Emmanuel
I'll Be Home for Christmas
Hallelujah Chorus

Thanks, Lee. I don't think anyone has ever been able to figure out who Terry Baxter was. He only ever made a few of this record club releases for Columbia, then disappears. Given the disparate styles, probably more than one outfit, but hard to say. Somebody somewhere needs to own up to this before all the participants pass on!

Did we ever determine if Terry Baxter was/is a real person? As far as I know, he or she only appeared on Columbia House recordings. With the many styles displayed on this LP, I wonder if he was an invention of the mail-order company to provide coherence to materials derived from many sources.

Lee, regarding "Do You Hear What I Hear" - if you enjoy rock music, specifically The Who's Baba O'Riley, perhaps give a listen to Spiraling's rendition. I don't know if it'll persuade your opinion but worth a try - https://www.youtube.com/watch?v=a7Vu93EUxZ8

I may give this "Home for Christmas" a listen later on (something tells me I've heard it before). Thanks!

Actually, Terry did a pretty good number of Columbia House/Treasury/etc. sets:https://www.discogs.com/artist/1198946-Terry-Baxter-His-Orchestra-Chorus And I'm thinking that he had an expert stable of arrangers, which would account for the diversity of styles. Then again, I'm purely guessing! I always grab his stuff (if it's in playable shape), since it's always entertaining. I'm surprised Columbia put so much care into its record club stuff.

You're right, as far as I know--he seems not to have shown up anywhere else. And that's the big question--are we hearing a number of orchestras, or a single unit featuring an unusual diversity of styles? I'd love to have some way of figuring this out. Maybe Billboard did a piece on Baxter at some point (likely not). A quick Google check shows no biographical info on him. Maybe his real name was Igor Convesky or something...

I only like a few tracks by the Who, and, luckily, "Baba" is one of them. Very clever mash-up (is that the term?)! I enjoyed it--thanks.

I've always been of the same opinion as Buster. I imagine it's a made up name.

I truly wish we could definitively confirm one way or another if Terry was real or just a made up name. There is something about the tracks here that sounds familiar (like I've heard them on another album) but I can't put my finger on where.
We have been having this same discussion in my FaceBook 'box set enthusiasts' group. Someone has the info somewhere LOL